Fishermen unload fishing gear at a port in Lianyuangang, in eastern China's Jiangsu province, on May 30, 2016
STR/AFP/Getty Images
By Charlie Campbell / Beijing and Tokyo

The frigid waters off Japan’s eastern coast teem with sardines, mackerel, anchovy and scallop. They are some of Asia’s most fertile fishing grounds, inspiring an exquisite seafood-rich national cuisine, and supporting a domestic fishing industry worth some $9 billion each year. Today, though, this natural bounty is under threat from a stealthy interloper: an armada of up to 200 Chinese fishing boats, which recently set up camp at the edge of Japan’s Exclusive Economic Zone (EEZ).

The boats are allegedly using destructive fishing practices like drift nets to “vacuum up” all manner of sea life, one Japanese official reveals to TIME. “This area is a breading ground so they are catching lots of juveniles,” says the official, speaking on condition of anonymity. “It has had a massive impact on Japanese fisheries.”

Some Chinese vessels have even entered Japanese waters, raising regional tensions and prompting Japan’s Foreign Minister to summon the Chinese ambassador for an explanation. But Japan is only the latest country to feel the brunt of China’s bloated fishing industry, which suffers from overcapacity owing in part to huge government subsidies. Illegal, unreported and unregulated (IUU) Chinese fishing is reaching “crisis point” for some of the world’s most vulnerable communities, say environmentalists, exacerbated by China’s own chronically depleted coastal waters. Last week, China’s Ministry of Agriculture said 13 million tons of fish are caught in Chinese territorial waters each year — 4 million to 5 million tons more than what’s sustainable.

Growing concern in Beijing over local waters may spell bad news for far-flung fishing grounds, as Chinese fleets turn their attention to bountiful seas across the developing world. New data from environmental groups indicates that China’s several hundred-strong “distant water fleet” is increasingly employing IUU tactics to plunder millions of dollars of seafood — disguising their true location, employing destructive fishing techniques and flouting the territorial boundaries of sovereign nations. A significant proportion of this is destined for American dinner tables; one study estimates that 20% to 32% of all wild-caught seafood imported to the U.S. in 2011 was illegally procured. China is the No. 1 exporter of seafood to American homes.

Environmentalists warn that without action we could face mass extinction on the seas. In addition, IUU fishing endangers the livelihoods of millions of people and threatens global security, prompting calls for better enforcement of regulations to compliment new state of the art vessel-tracking tools. West Africa, which boasts some of the world’s most fertile and productive fishing grounds, is particularly vulnerable, as local governments suffer from poor enforcement capabilities and endemic corruption. Today, one-third of all seafood caught off West Africa is illegally obtained by Chinese fishermen, says Steve Trent, executive director of the London-based NGO Environmental Justice Foundation. “It’s happening on an alarming scale and bigger than we’ve ever seen before.”

Much of impoverished West Africa relies on fishing for income and sustenance. However, Chinese fishing vessels, using illegal techniques like large “drift nets” — banned by the U.N. in 1992 because of their indiscriminate killing — have lead to a precipitous decline in the number and size of fish caught. Drift nets uncovered by environmentalists range from 10 to over 100 nautical miles in length, plunging from buoys at the surface to lead weights some 40 ft. deep. Traditional fishermen, paddling dugout wooden canoes and hand-casting nets, cannot compete with these “insidious curtains of death,” as they have been dubbed by one environmental group. Sharks, turtles and porpoises are routinely snared as bycatch. “Two or three industrial vessels can clear the near coastal waters of Sierra Leone, for example, in a very short period of time if they use destructive fishing gear and practices,” says Trent. “It’s not about hundreds or thousands; relatively few boats can wreak havoc.”

Read More: The Environment Is the Silent Casualty of Beijing’s Ambitions in the South China Sea

Five years ago, most boats targeting West Africa were Taiwanese or South Korean; now nearly all are Chinese. As well as corruption and poor enforcement, efforts to stop IUU fishing are deliberately hampered by Chinese vessels concealing their identities. Often they simply change the names painted on the side, unlawfully adopt the flags of the host nation, or flee to international waters if challenged by the local coast guard. Increasingly, though, boats are concealing their true whereabouts by tampering with Automatic Identification System (AIS) devices. AIS are global satellite positioning beacons that display a vessel’s location. They can be picked up by various monitoring systems, including satellites and handheld receivers. However, coverage is piecemeal and different nations have contrasting AIS regulations.

For the past three years, SkyTruth, a U.S. NGO, has been working with Google and environmental group Oceana to develop a global AIS monitoring system, Global Fishing Watch, to allow real-time tracking of vessels in a bid to combat IUU fishing. It is due to go live later this year. In the course of his research, one of SkyTruth’s top researchers, Bjorn Bergman, noticed something curious. He saw that a Chinese vessel with an AIS reading in international waters off New Zealand was adopting a curious, though somewhat familiar, route. “We moved its track over and saw it fitted exactly against the coast of South America,” he tells TIME. “It was pretty clear that the Straits of Magellan was the real location of the boat.”

Since then, SkyTruth says that by contrasting AIS with visual or other forms of data it has proved that at least 40 Chinese vessels are transmitting consistently false locations. There have been boats claiming to be off the coast of Mexico but really in the Guinea EEZ, and some even bizarrely purporting to be in the center of landmasses. “It is almost exclusively Chinese vessels that we have found spoofing,” he says.

Most of the vessels involved belong to the Fu Yuan Yu fleet. According to official records, there are 29 long-range fishing companies in China’s southern Fujian province, sending out 500 boats, the majority of which use the name Fu Yuan Yu with a number attached. Fu Yuan Yu ships also comprise most of those currently operating off the coast of Japan’s EEZ. “Some of these are also falsifying AIS data,” says the same Japanese official. (TIME contacted several of the specific companies involved but failed to get a response from any.)

A Foreign Ministry spokesperson tells TIME that no Chinese vessels were transmitting false locations, using illegal fishing methods and that China abided by international maritime laws. “We received one complaint from Japan and have investigated,” he says.

A spokesperson for China’s Fisheries department adds that AIS systems on fishing boats are strictly checked when installing and regularly examined by authorities. “Fishing tools are subject to Chinese law, any violation will be punished,” he says.

China’s new five-year plan flags fishing overcapacity as a significant problem, and state media on Wednesday trumpeted a joint operation with the U.S. Coast Guard in the Pacific, which it says snared “hundreds” of illegal fishing boats since July — 21 of them using drift nets. However, top-level policy appears estranged from implementation. “We protest a lot to the Chinese government but they just ignore us,” says the Japanese official.

Environmentalists are calling on the Beijing authorities to better regulate the activities of all Chinese vessels, scale back overcapacity and end the state subsidies fishing operations enjoy. They also want China — and all world governments — to make AIS systems obligatory and companies legally culpable should their readings not be correct. Unique vessel identifiers— a permanent code equivalent to a car vehicle-identification number etched into the engine block — should also be made mandatory for all vessels around the globe, they say.

Read More: Inside the International Contest Over the Most Important Waterway In the World

Making AIS mandatory would also aid the ability of SkyTruth’s Global Fishing Watch system to track all vessels around the world, flagging those that appear to be using destructive fishing techniques, like drift nets. Vessels exhibit certain characteristics depending on their purpose. Container ships, for example, always take the straightest possible route between two ports to reduce fuel costs. SkyTruth is developing an algorithm that would automatically flag vessels that betray classic drift net fishing behavior — essentially, sailing in large loops with lengthy pauses at each end — via their AIS readings.

That way, when retailers such as Walmart or Costco are sourcing seafood, they can choose those fishing vessels that have satellite data definitely showing where, when and how they have been operating. “When the market starts rewarding operators that are transparent and trackable, and penalizing those that aren’t, then we’re really going start shrinking down the ‘dark fleet,’” says SkyTruth president John Amos.

Combining responsible consumption, satellite technology and enhanced enforcement will help protect the world’s seas, and those that live by them, from creeping ruin. 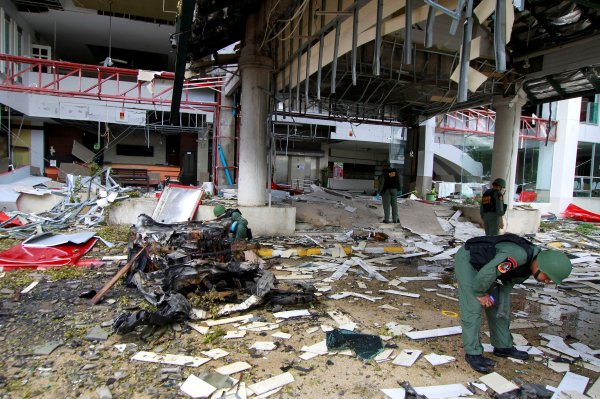