What Life Looks Like After the World's Most Extensive Face Transplant

By Alexandra Sifferlin and Diane Tsai

Fifteen years ago, Patrick Hardison, then a 27-year old volunteer firefighter in Senatobia, Miss., suffered a massive burn injury to his face when he ran into a burning house and the ceiling collapsed. He lost his ears, lips, eyelids and most of his nose. Hardison made history in 2015 when he became the recipient of the most extensive face transplant ever. His surgery is part of an innovative and controversial shift in the field of organ transplantation, documented in the Sept. 5 issue of TIME. People are now getting transplants of organs that may not save their lives, like a heart, but can dramatically improve them, like a new face.

Before his face transplant, Hardison grew depressed, lost his tire-selling business, became addicted to painkillers and split with his wife of 10 years. He went under the knife 71 times to improve the look and function of his face, yet almost always hid behind a baseball cap and sunglasses. When his doctor told him that his lack of eyelids was destroying his sight, that was the last straw. “I hated life,” Hardison says.

Last August, Hardison underwent a 26-hour surgery to replace his face with that of a 26-year-old bike mechanic who’d been killed in a cycling accident. Though there had been 37 face transplants since the first was performed in France in 2005, Hardison’s was by far the most extensive. Dr. Eduardo D. Rodriguez, head of the NYU Langone Medical Center face-transplant program, told Hardison he had only a 50% chance of surviving the procedure, since no one had successfully transplanted as much face and scalp tissue before.

“Everything in life has a risk,” Hardison tells TIME. “When it’s your time to go, you’ll go—whether you’re walking down the street and get hit by a car or you’re lying on the operating table.”

A year after the surgery, Hardison says he’s doing great. Though he remains on potent drugs to prevent his body from rejecting his face, so far, that hasn’t happened. He’s happy with his new life and recently took his five children to Disney World, where he was able to swim with them for the first time since his face injury in 2001. “I would’ve given up a long time ago if it wasn’t for them,” Hardison says of his kids.

TIME accompanied Hardison and his family on part of their vacation. “It’s given me a new life,” he says in the video above. “It’s given me hope that I can walk down the street and not be stared at.”

You can read more about Hardison and the new transplant revolution in the Sept. 5 issue of TIME. 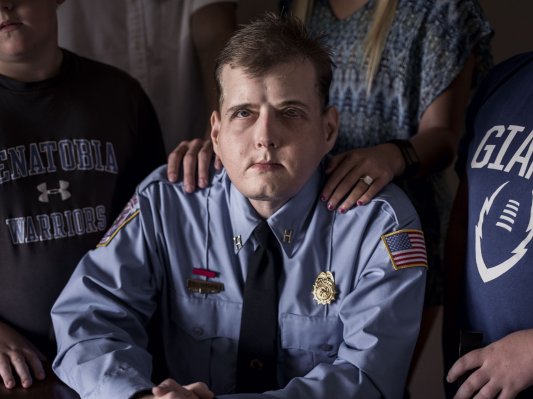 The New Transplant Revolution
Next Up: Editor's Pick