After devastating floods in Louisiana left 13 people dead and damaged 60,000 homes, the American Red Cross launched a massive relief effort, providing those displaced or affected by the floods with food, prescriptions, hygiene products, and more. But that relief effort comes at a price—one that the Red Cross estimates at $30 million.

And that price tag could rise, the humanitarian organization said on its Louisiana flood response informational page, since the flooding is, “likely the worst natural disaster in the United States since 2012’s Superstorm Sandy.”

As the costs rise, so does the predicted time it will take Louisiana to fully recover from the disaster.

Louisiana Gov. John Bel Edwards told CNN that process is “going to take many months,” adding that even though the flooding was “unprecedented and historic,” many are “just now realizing how significant it was.”

More than 25,000 people have filed flood claims, according to a Twitter post by Rafael Lemaitre, a Federal Emergency Management Agency spokesman.

The Louisiana floods have been compared to Hurricane Katrina, the last time the state faced a natural disaster of this magnitude. Katrina, which hit in 2005, is considered the most catastrophic and costly hurricane in U.S. history.

Amid the relief efforts, President Obama is scheduled to visit Louisiana on Tuesday. 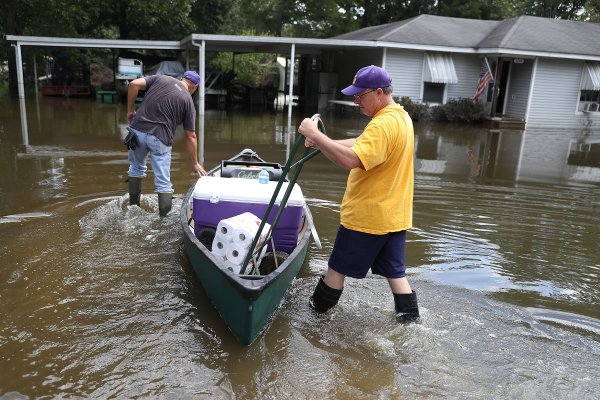 President Obama to Visit Louisiana
Next Up: Editor's Pick