If you only read one thing: Hillary Clinton’s email problems aren’t going away, after the Federal Bureau of Investigation reported Monday that it had found nearly 15,000 messages and documents from her time at the State Department that were not turned over after she revealed the existence of her private server. Clinton attorneys deleted thousands of emails they claimed were personal, after running a series of searches to pull out obviously work-related messages. It is as yet unclear whether any of those new documents are federal records, which would indicate that Clinton may have violated federal records laws. Either way, the next tranche of those documents are scheduled to be released before Election Day, keeping the saga in the news all the way through November 8. Meanwhile a separate batch of documents from top Clinton aide Huma Abedin’s account shows how donors to the Clinton Foundation received special access, if not favors, from the State Department during Clinton’s tenure.

Donald Trump is trying to keep the pressure on Clinton over the foundation and her emails to the extent that he can. In prepared statements and speeches he’s called for a special prosecutor to investigate her, but his off-the-cuff remarks and tweets have him swinging at morning cable anchors.

Trump also appears to be revising his position on illegal immigration—perhaps the defining issue of his primary campaign—canceling a planned Colorado speech on the issue Thursday as his campaign manager said his position was “to be determined.” On Monday, Trump and his aides maintained he wasn’t flip-flopping on the issue, but then described an enforcement similar to the Obama Administration’s existing policy for prioritizing the removal of violent offenders.

Why Donald Trump Picked Kellyanne Conway to Manage his Campaign
Job One: manage the candidate [TIME]

Emails Reveal How Foundation Donors Got Access to Clinton and Her Close Aides at State Dept.
Saga won’t end for Clinton [Washington Post]

Clinton Foundation Prepares To Hand Off Programs, Scale Back Operations
The foundation will do more than restricting donations if Hillary Clinton is elected president [BuzzFeed]

“I do feel sometimes like this campaign has entered into an alternative universe. I have to step into the alternative reality and, you know, answer questions about, am I alive, how much longer will I be alive, and the like.” — Hillary Clinton to Jimmy Kimmel Monday

“I’m not flip flopping. We want to come up with a fair but firm process. Fair but firm.” — Donald Trump to Fox News Monday on a seeming shift in his position on illegal immigration

The Biden Doctrine [The Atlantic] 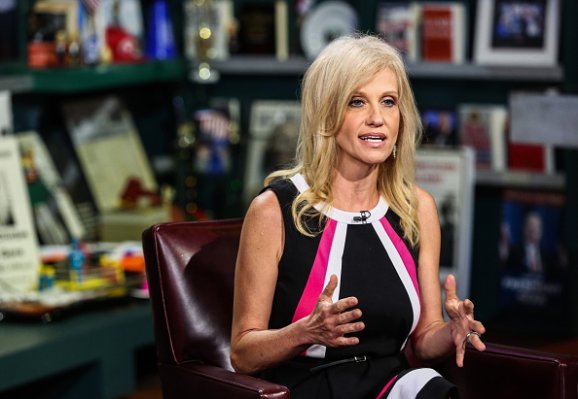