This Is the Real Reason Private Prisons Should Be Outlawed

A guard escorts a detainee at a facility in Adelanto, CA, run by the GEO Group, one of the largest private prison companies in the United States, on November 15, 2013.
John Moore—Getty Images
Ideas

The Department of Justice recently announced it would begin to phase out the use of private prisons for federal inmates. We should cheer, but less for the reasons given than those the DOJ left unsaid.

In her memo announcing the change, Deputy Attorney General Sally Yates pointed out that private prisons “compare poorly” to facilities run by the federal Bureau of Prisons. The DOJ found that, in general, private prisons provide fewer correctional services at greater security and safety risk to inmates and staff, without producing substantial savings.

These results are related. To achieve their modest savings, private prisons tend to cut back on staff costs and training. More than a decade ago, researchers found that private facilities pay their officers less, provide fewer hours of training and have higher inmate-to-staff ratios, a combination which may account for their much higher turnover rate among correctional officers, as well as the uptick in inmate assaults.

This is the conventional critique of private prisons: They do not deliver on their promise of significant savings, and the greater risk far outweighs the small fiscal benefit they provide to those within the walls.

But the evidence for this critique is mixed. As the legal scholar Sasha Volokh has pointed out, some studies have shown that public prisons are more cost-effective than their private counterparts, while others suggest the opposite. More importantly, Volokh argues that the private sector can be incentivized to improve—especially compared to the government—and that we should reform the model rather than end the experiment. If we accept the premise that private corporations should run prisons, Volokh’s argument has some force.

The real reason we should end the use of private prisons is not the conventional one. The real reason is that justice should not be administered through the prism of profit. As a rule, we disfavor private prosecutors hired by the victim’s family, or judges who get paid when a defendant in her court is convicted but not when he is acquitted. In both cases, the concern is obvious: We mistrust arrangements that might lead actors in the system to stray from their duty to administer justice impartially.

The problem with the private prison is analogous, though not identical. The companies that build and run private prisons have a financial interest in the continued growth of mass incarceration. That is why the two major players in this game—the Corrections Corporation of America and the GEO Group—invest heavily in lobbying for punitive criminal justice policies and make hefty contributions to political campaigns that will increase reliance on prisons.

From 1999-2010, for instance, the Sentencing Project found that CCA spent on average $1.4 million per year on lobbying at the federal level and employed a yearly average of 70 lobbyists at the state level. In California, where state law requires lobbyists to disclose their contributions in detail, we know that CCA used its resources to support, among other things, additional adult and juvenile prisons and detention centers and to oppose a bill that would have outlawed private prisons entirely.

These corporations have every legal right to shower money on friendly legislators. But the fact that they consider it in their interest to do so is exactly what exposes their troubling conflict. Especially today, when the systemic, deeply entrenched, racialized problems with the criminal justice system are increasingly apparent, we should not endorse strategies that encourage the expansion of the carceral state.

Regrettably, this was not the explicit message in the DOJ’s announcement. But Yates at least hinted at it. Before pointing out that private prisons “compare poorly” to their public counterparts—that is, before making the conventional critique—Yates noted that the number of federal prisoners has begun to fall, in part because of a shift in law and policy away from incarceration, especially in drug cases.

As a philosophical matter, the Obama Administration is trending—albeit haltingly—toward a default preference for non-carceral solutions to crime. The best evidence strongly supports their preference. The endless churning of the incarceration cycle—the thousands of young men and women repeatedly removed from their neighborhoods, returned and removed again—systematically destabilizes the very communities we are trying to save by disrupting the intricate but fragile webs of connection that hold them together. In fact, research has shown that high incarceration rates of the sort we have seen since the 1980s not only destabilize disadvantaged communities; they actually increase the incidence of crime. That is why former Attorney General Eric Holder recently argued that as a nation, we should aspire to send fewer people to prison for shorter periods.

This is precisely the opposite of what the private prison industry wants. While you can perhaps incentivize it to improve, you cannot incentivize a private corporation to go out of business. As long as we have private prisons, their corporate leadership will support policies that fill every bed.

There are roughly 115,000 people incarcerated in private prisons: 25,000 in the federal system and 90,000 in the states. A corporation’s bottom line should not determine their fate. The DOJ has done what it could. It is time for the states to follow the lead.

Joseph Margulies is a civil rights attorney and a professor of law and government at Cornell University, as well as the author most recently of What Changed When Everything Changed: 9/11 and the Making of National Identity. He represents Abu Zubaydah, for whose interrogation the Bush administration drafted the Torture Memos. He’s currently working on a book about criminal justice reform. 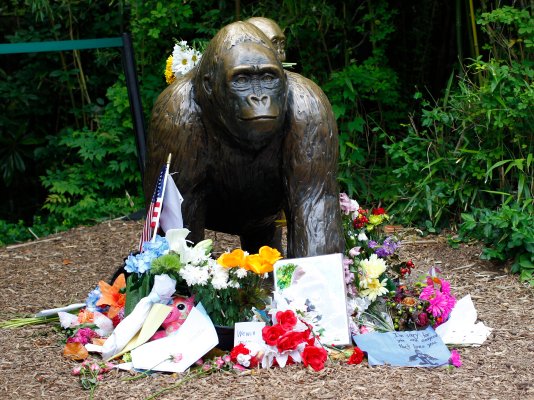 Harambe the Gorilla Is Dead. Get Over It.
Next Up: Editor's Pick