Much to the delight of his long-suffering fans, Ocean’s new releases were chock-full of high-profile surprises and artistic choices that made it well worth the wait. Read on for eight surprises from Ocean’s latest offerings.

Kanye West wrote an original poem about McDonald’s for Boys Don’t Cry: Yeezy, a longtime Ocean collaborator, contributed an original poem about the Golden Arches for Ocean’s ‘zine, whose credits also include the likes of artist Tom Sachs and photographer Ren Hang. The poem includes the lines, “McDonalds man / McDonalds man / The French fries had a plan” and “The salad bad and the ketchup made a band / Cus the French fries had a plan / The French fries had a plan,” according to social media posts with photos of the ‘zine. It was published alongside photos of West driving a blacked-out Lamborghini through the McDonald’s drive-through that were lensed by photographer Nabil Elderkin.

The Endless visual was originally much longer: In an in-depth interview with Pitchfork, Tom Sachs revealed that the original Endless visual stream was 140 hours, but was eventually edited down to 40 min. Sachs justified the long wait for the new album, citing that “it’s testament to the reality that things made by hand take time…when you see the video, you see him building a stairway to heaven in real time. The 40-minute version is edited, but there’s something like a 140-hour version. That’s the whole thing. That exists, that’s the art piece.”

Frank was well aware of the impatience and anxiety surrounding his new work: Contrary to popular belief, the elusive and reclusive Frank Ocean was not completely oblivious to his fans’ distress that an album would actually arrive. After he released all his new material, Ocean penned a note on his personal Tumblr with a wry nod to his fans’ devotion to him and his music. “I had the time of my life making all of this. Thank you all. Especially those of you who never let me forget I had to finish. Which is basically every one of y’all. Haha. Love you.” Ocean also acknowledges his time management skills on the final track on Blonde, “Futura Free,” where he sings, “I ain’t on your schedule/I ain’t on no schedule.”

Two of the new tracks actually debuted in 2013: Ocean performed early versions of Blonde‘s “Ivy” and “Seigfried” during a concert in Munich, Germany in the summer of 2013. The then-unnamed tracks eventually became the songs now featured on Ocean’s new album.

He turned Queen Bey into the most over-qualified backup singer ever: Beyoncé and Ocean have long been collaborators, starting with him writing “I Miss You,” for her 2011 studio album, 4. He later appeared on her track, “Superpower” in 2013 on her album, Beyoncé. Now, on Blonde, Beyoncé’s diva vocals take the backseat on “Pink + White,” appearing nearly halfway through the sultry track, where she only utters one line, “Take it easy,” and spends the rest of the time harmonizing in the background. Who takes one of the biggest stars in music and culture and uses her just for background vocals? Frank Ocean, that’s who.

His album shares a name with his company: Frank’s album is titled, Blonde, but it reads as Blond on his album cover which features an image of him with neon green hair. It turns out that his album shares the same title as his racing company, Blonde Racing LLC, which is also responsible for the content posted on his official website, BoysDontCry.co

Blonde takes the spiritual existentialism that defined Channel Orange and strides forward confidently: In his ‘zine Boys Don’t Cry, Ocean features sensual shots of both male and female bodies, while in his “Nikes” video, nude and/or glitter-covered bodies embrace. Ocean also sports winged eyeliner, gold body glitter and a pearl-encrusted Balmain jumpsuit. Additionally, on Endless, Ocean samples a clip of drag queen Crystal LaBeija from the 1967 documentary, The Queen, and opens his ‘zine with a confession that his car obsession might be: “a deep subconscious straight boy fantasy…consciously though, I don’t want straight — a little bent is good.”

His latest offerings showcase his skills as an artist and creative force: With the release of not only a new studio album, but a visual album that chronicles a live art performance (and some major carpentry skills!), a image-driven ‘zine, some introspective Tumblr essays, and a music video that reads more as a lush short film, Ocean has proved that he can seamlessly use his talents across many genres. 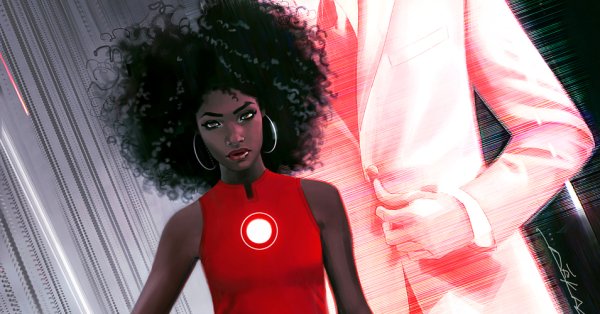 Marvel's Black Female Iron Man Will Be Named Ironheart
Next Up: Editor's Pick