RIO DE JANEIRO, BRAZIL - AUGUST 17: New Zealand distance runner, Nikki Hamblin and American runner, Abbey D'Agostino pose for a portrait on August 17, 2016 in Rio de Janeiro, Brazil. Hamblin and D'Agostino came last in their 5000m heat on Tuesday after they collided and fell midway through their race. The pair have been commended for their sportsmanship after they helped each other up to finish the race. (Photo by Chris Graythen/Getty Images)
Chris Graythen—Getty Images
By Raisa Bruner

The Pierre de Coubertin medal has only been awarded 17 times in Olympic history. On Saturday, New Zealand runner Nikki Hamblin and American Abbey D’Agostino became the 18th and 19th recipients of the unusual award — but not because of their athletic prowess. Instead, they received the rare prize because they displayed an extraordinary act of sportsmanship,

The two were 3,000 meters into the 5,000 meter race when Hamblin clipped D’Agostino, bringing both runners down. D’Agostino convinced Hamblin to get back up — but it turned out D’Agostino was hurt. Together, they managed to encourage each other to finish the race.

“The D’Agostino and Hamblin story is one of humanity and sacrifice which has already captured the hearts of people across the globe,” the International Olympic Committee said in a statement.

A third Pierre de Coubertin medal was also handed out on Saturday — to the Norwegian men’s handball team, for their “gracious attitude” in choosing to abstain from filing a complaint after losing out in an Olympics qualifying match to Germany. Apparently, there had been one too many opposing players on the court at the time of the winning shot, but Norway decided not to pursue a complaint. 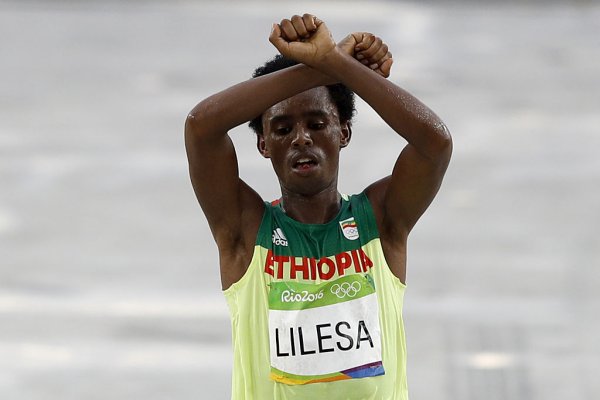 Ethiopia Says Olympic Runner Feyisa Lilesa Will Get Hero's Welcome Despite Defiance
Next Up: Editor's Pick