One in Three in U.S. Think Voter Fraud a 'Major' Problem

More than a third of U.S. citizens view voter fraud as a "major problem", according to a survey carried out by research company Gallup (file photo)
Seth Perlman—AP
By Kate Samuelson

Around one in three U.S. citizens view voter fraud as a “major problem”, according to a survey carried out by research company Gallup.

When asked their degree of concern about votes being cast by people who, by law, are not eligible to vote, 36% of the respondents thought it was a “major problem”, 32% a “minor problem” and 29% “not a problem at all”.

Republicans were more likely than Democrats to view voter fraud as a major problem, at 52% compared to just 26%. This has been reflected in the policy stances of many Republican governors, who have called for more rigid identification requirements.

Voter ID laws, which mandate some form of identification in order to vote or receive a ballot for an election, were most popular among residents living in U.S.’s southern states (84%) and the Midwest (84%). According to the National Conference of State Legislatures (NCSL), those are the regions in which eight of the strictest state voter ID laws are already enforced.

The majority of both Democrat (84%) and Republican (74%) supporters are in favor of early voting, which, according to Gallup, typically benefits Democratic candidates, who have performed well electorally among early voters in many states that allow the option.

Trump has made it clear that he thinks the election could be rigged, and, as The New York Times reports, his campaign is urging people to sign up as election workers to watch voters as they cast their ballots on Nov. 8. The call for volunteers has fueled concerns about voter intimidation. At a rally earlier this month in Wilmington, N.C., Trump told his supporters that without strict voter identification laws, people would be “voting 15 times for Hillary.”

Despite these fears about voter fraud, a 2014 study located just 31 different incidents of voter fraud in general, primary, special, and municipal elections from 2000 through to 2014. “In general and primary elections alone, more than 1 billion ballots were cast in that period,” wrote Justin Levitt, a professor at the Loyola Law School who has tracked allegations of electoral fraud for years, wrote in the Washington Post.

The Gallup survey results were based on telephone interviews conducted between Aug. 15 and 16 2016, with a random sample of 1,013 adults, aged 18 and older, living in all 50 U.S. states and the District of Columbia. 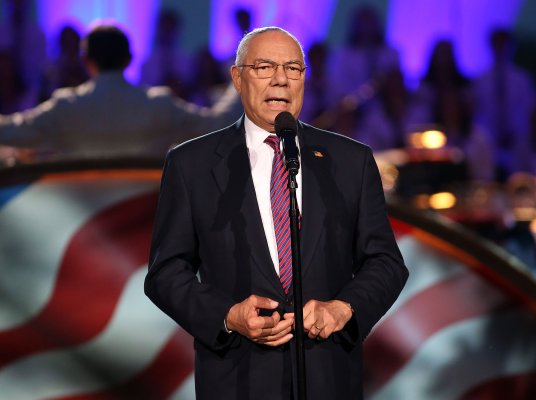 Powell Says Clinton 'People' Pinning Email Scandal on Him
Next Up: Editor's Pick