Why Donald Trump is Reaching Out to Black Voters

If you only read one thing: Donald Trump’s new outreach to the African-American community, revealed in the last few days, amounts to his statement, “What the hell do you have to lose?” His comments, before an overwhelmingly white audience, are telling. The GOP nominee has rarely met with African-American leaders, turning down invites from the NAACP and other organizations. Trump’s outreach appears to be more an effort to reassure white voters that he’s speaking to those of color, with a message designed to resonate with the former more than the latter.

Donald Trump’s immigration proposals, which include a “deportation force” to remove 11 million people in the U.S. illegally, appears to be somewhat in flux after a meeting with Hispanic leaders in New York left some believing he may be shifting his position on a path to legalization. His campaign denied that initially, but his campaign manager now says his plan, which served as one of his core campaign promises to voters in the primary, is TBD.

The Clinton Foundation is once again under scrutiny, as Donald Trump is calling for it to be immediately shuttered and the Clinton campaign is struggling to defend why it was okay for the organization to accept foreign and corporate donations while she was Secretary of State, as they admit it’d be a conflict if she is elected president.

Donald Trump, a ‘Rigged’ Election and the Politics of Race
Republicans fear his rhetoric could backfire [New York Times]

Donald Trump to Black Voters: ‘What the Hell Do You Have to Lose?’
An ‘appeal’ to black voters [Associated Press]

Trump Claims his Golf Courses Are Worth Tens of Millions. Until the Tax Bill Arrives.
The candidate’s disclosures are in conflict, as Trump defends practice [Washington Post]

“To be determined.” – Trump campaign manager Kellyanne Conway on whether her candidate still supports a “deportation force” to remove the 11 million people in the U.S. illegally

“It will take some time to adjust.” —Clinton campaign manager Robby Mook on the Clinton Foundation’s foreign and corporate donations 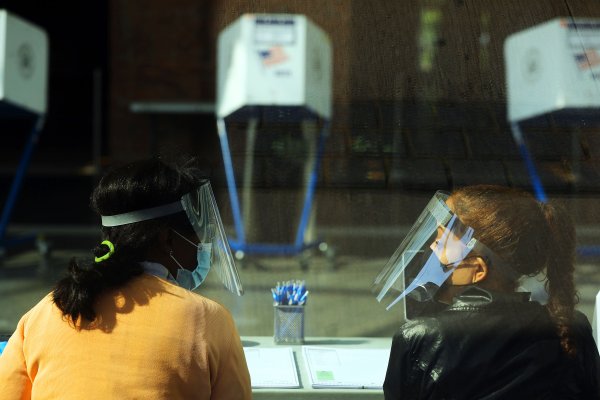 The Pandemic Is Causing a Shortage of Poll Workers. Can States Recruit Enough By Election Day?
EDIT POST