Protesters hold placards calling for Hong Kong's independence as they march on the street during a rally on July 1, 2016, in Hong Kong
Bloomberg/Getty Images
By Rishi Iyengar / Hong Kong

Hong Kong’s rapidly growing independence movement has intensified its battle against the city’s pro-China establishment, with one of the movement’s main parties challenging the government to arrest its members en masse after a prominent lawyer demanded it be deemed illegal.

“The party invites the Hong Kong Communist Colonial government to gazette and list the Hong Kong National Party as an illegal organization and to arrest all members, so destroying the façade of the so-called ‘one country, two systems’,” the statement added, referring to the principle under which the city is ruled by China but enjoys a high degree of autonomy and certain political freedoms.

The HKNP was responding to a statement earlier in the day by Alan Hoo, a very prominent local barrister and chairman of the Basic Law Institute — a shadowy, pro-Beijing entity set up to promote Hong Kong’s de facto constitution.

Hoo demanded that the Chinese government criminalize any advocacy of secession from China, and declare the party an illegal organization.

“It wants to topple the Chinese People’s Government’s sovereignty in Hong Kong,” he said, according to local media reports.

Hong Kong’s separatist movement — long dismissed as a radical fringe — has gathered momentum in recent weeks, with a recent poll showing 1 in 6 Hong Kongers supports independence from China (the figure climbs to 40% for the 15-to-24 age group). A pro-independence rally earlier this month, the first of its kind, saw an attendance of thousands.

“The movement has grown pretty fast,” David Zweig, an expert on Chinese politics at the Hong Kong University of Science and Technology, tells TIME. “Five or six years ago it was a couple hundred people,” he adds, “now it’s well into the thousands.”

The Hong Kong government has responded by attempting to stymie the movement’s proponents wherever possible, banning six pro-independence activists from next month’s legislative elections and warning teachers in the city’s schools that discussing independence could see their teaching licenses revoked. The election ban has been met with more demonstrations, with hundreds taking to the streets on Sunday in protest.

Leading establishment figures have also stepped up their rhetoric, not only against the separatist groups but also younger pro-democracy activists like Joshua Wong.

Fanny Law, a member of the city’s top decisionmaking body known as the Executive Council, called for a probe into the “family backgrounds” of those advocating independence in secondary schools, foremost among them a group that recently called for a the formation of a pro-independence “Hong Kong Army.” The former president of the Hong Kong Law Society, meanwhile, denounced the recent sentences handed down to student leaders Wong, Nathan Law and Alex Chow — who were given community service in lieu of being imprisoned for their role in the 2014 pro-democracy protests known as the Umbrella Revolution — as “inappropriately lenient,” demanding that they be reviewed and increased.

The Hong Kong government also issued a terse, seemingly out-of-the-blue statement that independence activists from neighboring, self-ruled island of Taiwan are “not welcome” in the city.

“Beijing sees this as one more component or one more threat from the periphery for separatism, and just something that they will not tolerate,” says Zweig. “They don’t like it in Taiwan, but they don’t have the leverage in Taiwan that they have in Hong Kong, so they’re going to squeeze Hong Kong.”

But the more Beijing tries to actively suppress Hong Kong independence, he says, the larger the section of the population it could invariably galvanize.

“Hong Kong society is likely to push back and support the right of people to express themselves,” Zweig says.

Indeed, many of the protesters at Sunday’s rally told the South China Morning Post that they didn’t necessarily support independence but found the banning of political candidates unacceptable.

“The more radical elements within society will, if you push them, turn towards more violent means,” Zweig warns. “Maybe [Chinese authorities] want to do that, and they have an excuse to crack down even further.” 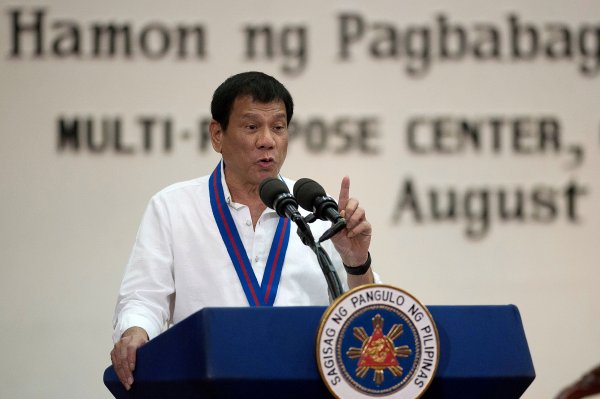 Philippines' Duterte Fires 'Thousands' of Officials
Next Up: Editor's Pick