The 7 Greatest Moments of the Rio Olympics

When more than 11,000 athletes from 206 countries around the world come together, great things happen. But even among a sea of personal bests, unbelievable firsts and just plain wow moments, these seven (well, close enough) stood out:

But it wasn’t just soccer and the first gold ever in a sport that consumes the country that drove Brazilian fans into a frenzy. Other locally beloved sports, from judo to beach volleyball, also gave the caraiocas reason to break out their green and yellow pride. The country’s men’s beach volleyball team of Alison Cerutti and Bruno Oscar Schmidt defeated Italy on Brazil’s hallowed Copacabana sand, while judoka Rafaela Silva compelled the nation to notice its oft-forgotten citizens. A product of Rio’s tougher favela neighborhoods, she brought Brazil its first gold of the Games, and in so doing demonstrated that perseverance and performance aren’t a matter of money or privilege, but of spirit.

Expectation can be a heavy burden, and that pressure only escalates at the Olympics. Much was expected of talented athletes, but perhaps none more than U.S. gymnast Simone Biles and U.S. swimmer Katie Ledecky. Both have dominated their sports in the last four years, and both were, naturally, coming to Rio to deliver on their dominance with gold. But Olympic greatness isn’t always a given; so much could have derailed them. It’s unusual to see a gymnast hit all of her routines, and that’s pretty much what Biles did, save for one mistake on beam over six days of competing. Same for Ledecky in the pool; the Marylander kept her composure and stayed ahead of all comers, no matter the race, no matter the distance. Both were able to meet those expectations and surpass them. Biles helped the U.S. to defend its gold in the team event, then went on to add the individual all-around and two more golds as well as a bronze in individual events to her collection. Ledecky not only swept all the freestyle events, but set world records in two of them on her way to five medals, four of them gold. I was exhausted just watching those feats, and can’t imagine what a toll it took on them.

Brothers and sisters are always competing, but Olympic siblings take that to a whole new level. While Australia’s Campbell sisters weren’t able to make the swimming history they were hoping for by finishing among the medals in their freestyle events, the fact that the sisters were in two of the eight lanes in an Olympic final was impressive on its own. And Great Britain’s Brownlee brothers, Alistair and Jonny, claimed gold and silver in the men’s triathlon to make it a family affair. Seeing the brothers, just moments before battling each other to the tape, grab hands as they collapsed at the finish, was truly an Olympic moment.

It Doesn’t Take a Country

Displaced but not discouraged, the 10 refugee athletes deservedly received the most enthusiastic cheers as they marched in during Opening Ceremonies under the Olympic flag as the Games’ first Refugee Olympic Team. Forced to flee their homes because of civil war or persecution, these athletes just wanted to compete. Sports, they showed, isn’t about politics or barriers, but about the purity of healthy competition. Yusra Mardini from Syria, who didn’t make it out of the heats in her swimming event, vowed to continue training and compete again in 2020—as a medal contender.

In the pool and on the track, the Rio Games saw two once-in-a-generation legends say farewell. Michael Phelps swam his last competitive lap in the Rio Aquatics Center, and Usain Bolt took his last sprint around the Olympic stadium track. Both fittingly ended their careers with gold, in relays that were less a competition but more of a victory lap, a thank you to legends who have forever changed their respective sports. Phelps, a teen phenom in 2004 when I first began covering his feats in the pool, is now a father and soon-to-be-husband. It’s not just the years that have given him more maturity, it’s his experiences that have made him relish his last Games. Neither he nor Bolt seemed to really want to bid adieu, lingering for one last time as they savored what they had wrought. Swimming and athletics will not be the same without them, and neither, for that matter, will the Olympics.

Even while greats like Phelps and Bolt awed with their seemingly unstoppable ability to mint gold, there’s nothing like your first time. Winning your first gold medal at an Olympics is one thing, but winning your country’s first ever gold is quite another. Joseph Schooling from Singapore and Monica Puig from Puerto Rico both earned that honor in Rio, Schooling with the added high of beating his idol Phelps in the 100m butterfly and Puig in the women’s singles for tennis. In the moments after the race, Schooling seemed more stunned than anything else, shell-shocked by what he had done and what it could mean for sports and swimming in his country. Puig too was overcome with emotion. They’re heroes at home––and for good reason. They’ve now blazed a path that others may tread.

And few first-timers met with the reception of Fiji’s men’s rugby team. The scrappy squad, filled with players who have side jobs as hotel bellhops and even a prison warden, won gold in rugby sevens––delivering the Pacific island nation their first Olympic medal in any sport. How big a deal was their win? The Prime Minister declared a national holiday.

Distance runners Nikki Hamblin from New Zealand and Abbey d’Agostino from the U.S. did not win medals in the 5000m, but they will both leave Rio with something far more precious. When Hamblin went down in the heats for the race, d’Agostino tumbled after her, but put her hand on Hamblin’s shoulder and encouraged her to finish the race. Then it was d’Agostino, whose knee had buckled in the first collision, who fell. Unable to get up, Hamblin stayed with her until a wheelchair came to take her off the track. Later in the finals, d’Agostino watched from the stands as Hamblin finished last. But the rankings didn’t matter. It wasn’t where they finished but how they finished that made them examples of why we watch—and love—the Olympics.

Just as endearing as the Brazilian athletes were the local, and vocal, fans. It didn’t matter what the sport or what the standing, they produced the loudest, ground-shaking, most passionate and embracing welcome for their home town favorites. 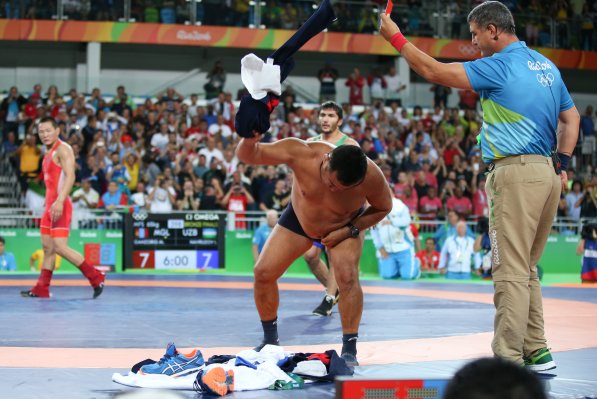 The 9 Craziest Things I Saw at the Rio Olympics
Next Up: Editor's Pick