You may not know who Virginia Apgar was, but chances are she touched your life the moment you emerged from your mother’s womb. Apgar is best known as the creator of a simple test that changed the course of neonatology—the care of newborn infants—forever. But because she was a woman, her groundbreaking career was born along with frustration, near-misses and discouragement.

Born in 1909, Virginia Apgar grew up in an era when women still struggled to enter medicine. Science ran in Apgar’s family—her father was a devoted amateur astronomer and electrician—but so did medical tragedy: Before she was born, Apgar’s brother died of tuberculosis, and her other brother struggled with childhood illness. That inheritance, along with a restless sense of curiosity, inspired Apgar to study zoology and then obtain her medical degree.

But though she was ambitious and bright, Apgar was perhaps born in the wrong generation. Ten years before she was born, there were only 7,000 women doctors in the United States, but that number dropped even further around the year of Apgar’s birth due to a harsh irony: Though medicine became a more respected, regulated pursuit, many of the schools that offered accepted medical education did not admit women at all. Women who did attain a medical degree were often shunted into obscure specialties or discouraged by their male colleagues, and it was no different for Apgar. Though she was a talented surgeon, the male chair of surgery at Columbia University, where she did her residency, discouraged her from pursuing surgery as a career. Instead, he argued, Apgar should become an anesthesiologist. Though the mentor claimed he thought Apgar could contribute to the field with her enthusiasm and skill, anesthesiology was not a recognized specialty at the time. As a result, Apgar had a hard time receiving training.

She eventually did become an anesthesiologist and rose to director of Columbia University’s department of anesthesia, but Apgar faced other obstacles because of her sex. Though an increasing number of women entered the little-respected field of anesthesia, as it was more open to them than other fields, Apgar had a difficult time finding talented researchers for her department. She was also unable to socialize with her male colleagues, who held their after-meeting get-togethers in social clubs closed to women.

Despite these challenges, Apgar broke a barrier in 1949 when she became the first woman to become a full professor at the Columbia University College of Physicians and Surgeons. She began to study how anesthesia affected mothers and babies, a neglected area of research. Meanwhile, as the 20th century progressed, even though more women were having babies in hospitals, the newborn mortality rate remained high.

“As late as the 1940s, delivery-room doctors focused on mothers and paid little attention to babies,” recalled Apgar’s friend, Melinda Beck. “Those who were small and struggling were often left to die, since doctors assumed little could be done for them.” But a lunchroom conversation with Apgar changed that. When a medical student asked Apgar how she would evaluate the health of a newborn baby, she scribbled down a quick list of important signs—the appearance of the baby’s skin, its pulse, how quickly it breathes and other markers. Apgar wondered if babies could be quickly assessed right after they were born with a scoring system that would tell doctors if there was a major problem. So she tried out her idea.

It worked. Over 17,000 births later, Apgar became known for the “Apgar score” (and doctors today still remember the score based on her name: appearance, pulse, grimace, activity and respiration.) Babies get a score of zero, one or two—poor, fair or normal—for each of those factors, and the total score lets physicians know immediately if something is wrong. That knowledge helps doctors provide the right treatment for babies in need of everything from resuscitation to oxygen and heart monitoring. The score eventually became used by doctors throughout the United States at one and five minutes after birth. Apgar was even able to connect it to infant mortality itself: Babies who scored the lowest had a death rate of 14%; the highest only 0.13%.

Apgar’s score is credited with a steady increase in neonatal survival rates, and her work with new babies helped her discover ways to detect birth defects within moments of a baby’s birth. Apgar eventually got her Master’s in public health and went on to lead the March of Dimes’ Division of Congenital Deformations and educate physicians and parents about birth defects.

Dr. Apgar’s enthusiasm and energy were unstoppable, but so was her professional commitment. One biography recalls how she secretly went to a morgue to find out why a baby had unexpectedly died—and when she discovered that it was due to her own error, she voluntarily admitted her mistake. “Nobody, but nobody is going to stop breathing on me!” the doctor, who carried full tracheotomy and resuscitation equipment in case of an emergency, was known to declare. And though she eschewed the organized feminist movement, claiming that “women are liberated from the time they leave the womb,” she also quipped that she never married because “it’s just that I haven’t found a man who can cook.”

Apgar may have struggled to get to the table, but once she was there she never stopped helping others—even as she helped herself to a career matched by few women in medicine. 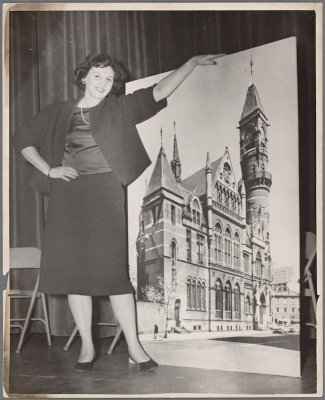 The Woman Who Helped Save New York City's Historic Buildings
Next Up: Editor's Pick