The Shot That Healed A Nation

Neymar of Brazil celebrates scoring the winning penalty in the penalty shoot out during the Men's Football Final between Brazil and Germany at the Maracana Stadium on Day 15 of the Rio 2016 Olympic Games on Aug. 20, 2016 in Rio de Janeiro, Brazil.
Laurence Griffiths—Getty Images
By Sean Gregory/Rio de Janeiro

He was Brazil’s face for these Olympics, carrying a nation’s expectations on his feet. Neymar could have stayed in Barcelona, helping Leo Messi, Luis Suarez and his other gilded club teammates kick off their La Liga season Saturday (with a win, of course). The Olympic men’s soccer tournament is a bit of a JV affair; it’s only open to players under 23, with each team allowed three exceptions. But Neymar, 24, chose to play for his country, to help purge the ghosts of the 2014 World Cup and deliver the kind of delirious victory Brazilians witnessed in Maracana stadium Saturday night.

Brazil beat Germany in a 5-4 penalty shootout to give the host team its first Olympic soccer gold medal. The teams played to a 1-1 tie in regulation and extra time. Neymar scored Brazil’s first goal of the game, on a bending free kick in the 26th minute that he placed perfectly into the top right corner of the goal; it clipped the bottom of the crossbar, before bouncing into the net. That’s why he’s Neymar.

In the 59th minute, however, Brazil’s defense let up. Germany’s Maxmilian Meyer found himself wide open in the goal box, took a cross and punched in a cakewalk of a goal. Both teams had opportunities during the rest of the regulation and extra time, to no avail. Germany seemed to be playing more conservatively, so it could force a penalty shootout. The packed crowd let out searing screams of displeasure in response.

The teams traded four penalty goals each, before Brazil’s keeper, Weverton, dove to his left to stop the shot by Germany’s Nils Peterson. Now, it came down to Neymar. He’ll never face more pressure in his career. Two summers ago, Germany humiliated Brazil, 7-1, on its own soil in the World Cup semifinals.

And now Neymar had a chance to mask, if not quite heal, a wound that still stings in this soccer-mad nation. And that he did. A few choppy steps, a bit of a misdirection intended to foil the keeper, and then a shot straight into the net. Neymar’s head sank to the grass, and he erupted in tears as teammates mobbed him on the field. Fans in the stadium, outside of it on the streets of Rio and across the entire country did the same.

No one wanted to leave. Podiums were hauled out for the medals ceremony and Neymar took a victory lap after to the applause that would have been reserved for Usain Bolt had the Games been in Kingston.

Before the game, revenge was the word on the street outside Maracana. The humiliation of 2014 remains fresh. One fan said it feels like a nightmare, as if there’s no way what actually transpired could have been real. In Rio, it didn’t matter that this was not exactly a rematch, filled with younger players and not the main national teams. Brazil had never won a gold medal in the nation’s most popular sport. And though the country hasn’t won a World Cup since 2002, it still considers itself far superior than the rest of the world. Brazil couldn’t afford anything less than gold at another worldwide soccer tournament hosted within its borders. To do it at the expense of Germany, its newfound foil from across the Atlantic, made it that much sweeter.

“This restores our self-esteem,” said Brazil coach Rogerio Micale, according to the AP. “We see that not all was lost, our football is still alive.

The win is a fitting Olympic coda for Brazil. The host nation has not fared as well as it hoped at these Games, but it has put on a large-scale production with relative ease. Sure, there were glitches: food shortages at the venues, spotty transportation services, incidences of petty crime that had nothing to do with Ryan Lochte. But in the end, all that small stuff gets forgotten.

Brazil really needed this win for its athletic psyche. The country envisioned finishing in the top 10 in the medal count: it won’t do so. But after tonight’s win, that shortcoming won’t be remembered either. Soccer won, over Germany. The World Cup embarrassment won’t be completely expunged. But the soccer healing began. And Neymar, the man who could well be Pele’s heir, fraught a mantle as that is, gave the nation the moment they wanted more than any other. 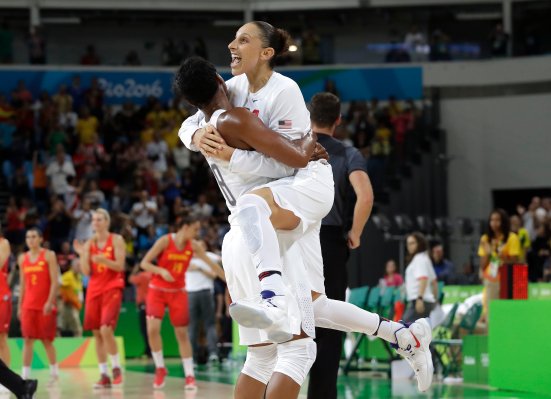