How Tika Sumpter Fashioned a Michelle Obama Fit for the Movies

The Obamas’ days in the White House may be numbered, but their future in Hollywood—or at least, having their story told onscreen—is just getting started. In Southside With You, out Aug. 26, Tika Sumpter and Parker Sawyers play a young Michelle and Barack on their first date in Chicago in 1989. Written and directed by Richard Tanne, the movie takes place over the course of a single day: absorbing some culture at the Art Institute of Chicago, catching Spike Lee’s Do the Right Thing, sharing a cone at Baskin Robbins.

When Tanne approached Sumpter several years ago about playing the role of Michelle, the actor was so eager to see the movie made that she signed on as a producer, vowing to usher it through regardless of whether she was ultimately cast as the future First Lady. But Sumpter, who got her start on One Life to Live and starred opposite Queen Latifah in Bessie and Kevin Hart in both Ride Along movies, was thrilled to nab the leading role she’d been waiting for. The challenge: to breathe life into a version of Michelle Obama decades removed from the one the world has come to know since her husband was elected president in 2008.

In anticipation of the film’s release, Sumpter talked to TIME about imbuing 1989-Michelle with glimpses of 2016-Michelle, the difference between imitation and embodiment and the reasons why her Michelle repeatedly rebuffs the advances of the smart, handsome law student relentlessly pursuing her.

TIME: Tell me about how you got involved with this project.

Tika Sumpter: I was given this synopsis of a story about two people, and it happened to be the First Lady and the President, but it was an origin story of how they first met. Richard Tanne impressed me a lot, and he told me he was planning on writing it when he finished what he was writing at the time. I was on top of him about writing it and told him, “Listen, even if I don’t play Michelle, I want to get this made because I think it’s an important film.” I didn’t know how I was going to get it made exactly, but I pushed it through.

You’ve talked about some of the frustration of often playing wives and girlfriends and best friends. Do you feel like sometimes you need to produce a project to accelerate getting a strong leading role for yourself?

Completely. Listen, if you’re not going to put me in your film, I’m going to put myself in one that I love, and do it myself. I could show you better than I can tell you. It’s sad sometimes because you’re just like, I could play that part!, but the opportunity goes to somebody else. I felt like I had to do it in order to show what I can do.

We don’t see that many love stories onscreen with two black leads. Do you feel like things are moving in the right direction?

I think people are trying to figure it out. I wouldn’t call it a risk, but obviously things are based off of box office [performance], so we’ll see how this does on the 26th. But from the responses we’re getting from people—they really enjoy seeing themselves onscreen, and not just black people, but white people, Indian people—they see love and they see their own stories. Hopefully people will come out and see it and disprove whatever studios think.

You’re playing Michelle long before she reached the national stage. How did you tap into her inner life during that period?

It was mostly taken from personal accounts of people who knew her during that time, [in particular a book written by] her brother. I got to take what I learned from those accounts and create my Michelle and what I thought she could possibly be like. The writing was there in the script, it was just the nuance and seeing different pockets of her that I had to make sure came out. It was kind of a ground-up Michelle building, and making sure I had the dialect down and some of her mannerisms. But it wasn’t supposed to be an imitation of her. It’s an embodiment of her.

When you’re playing someone so famous, do you have less freedom to play with the role?

You are working within a realm. You have to work within a space and time, so it was challenging, but it was also rewarding, because as an actor that means you have to really do your homework. For me, you still needed to see a future Michelle Obama in there. You needed to see some of the stuff that you saw at the Democratic National Convention when she gave that speech. You needed to see, “Oh, there’s glimpses of her there, I see her.”

Her relationship with her parents was a crucial part of her characterization.

Oh yeah. Her brother’s book really helped me because it describes how they had a voice in their home and how education was the key for them. Nothing was going to stop them from not just running the race, but doing the best. Excellence was just part of the household, as well as speaking up and having a voice. I think her parents impacted her life so much from their hard work and dedication. They were very involved in their kids lives. They liked hanging out with their kids, and they were very in tune with what was going on.

It might seem to some viewers like she’s playing hard to get with Barack, but there’s more at play for her in rejecting his advances.

Listen, she’s not just being reluctant in order to be the cute girl who’s like [puts on a coy voice], “I don’t know, I’m playing hard to get.” She had her own desire and focus to be successful. She worked hard to get to where she was and didn’t want to be seen as the girlfriend of this hotshot smooth talker. Being a black woman surrounded by mostly white men in 1989, you know there would have been talk. She had a lot at stake and she needed him to understand why. And when he kind of is flippant about it, she’s just like, “You don’t get it. You’re not a black woman and you’re not where I am in this firm right now.”

Was it hard for you not to think about what Michelle would think of your performance of her?

Not when I was working on set. I just played the truth of the scene and did the work. But it’s a film I’m really proud of and a film that’s important for young people to see. She’s a woman that a lot of women look up to. Hopefully she’ll see her strengths in there and she’ll see the intelligence and passion we all hold in high regard. 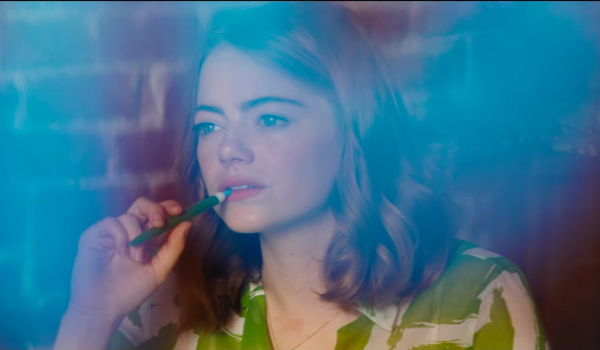 Watch Emma Stone and Ryan Gosling Chase Their Dreams in the New La La Land Trailer
Next Up: Editor's Pick