Ryan Lochte on Friday apologized for his “behavior” at the Rio de Janeiro Olympics after Brazilian authorities said the U.S. swimmer made up a story about being robbed at gunpoint in the city.

The 32-year-old athlete and 12-time Olympic medalist issued a statement on Twitter, saying he was sorry for not being “more careful and candid” in how he described events that took place during a night of partying in Rio.

“I want to apologize for my behavior last weekend — for not being more careful and candid in how I described the events of that early morning and for my role in taking the focus away from the many athletes fulfilling their dreams of participating in the Olympics,” Lochte said.

“I accept responsibility for my role in this happening and have learned some valuable lessons,” he added.
https://twitter.com/RyanLochte?ref_src=twsrc%5Egoogle%7Ctwcamp%5Eserp%7Ctwgr%5Eauthor

Lochte had initially said he and teammates Gunnar Bentz, Jack Conger and Jimmy Feigen were robbed early Sunday by people posing as armed police officers while leaving the French Olympic team’s hospitality house in a taxi going to the athletes village.

Authorities in Brazil on Thursday said the swimmers fabricated the story after they vandalized a gas station’s bathroom. Surveillance video shows the athletes interacting with gas station employees and security guards and, at one point, getting out of a taxi after a man confronts them.

State of Rio de Janeiro Police Chief Fernando Veloso said an armed security guard at the station did pull a gun on one of the athletes after demanding that they pay for the damage.

Thanks, Lochte. This Had Been a Pretty Great Olympics

“It’s traumatic to be out late with your friends in a foreign country — with a language barrier — and have a stranger point a gun at you and demand money to let you leave,” Lochte said. “But regardless of the behavior of anyone else that night, I should have been much more responsible in how I handled myself and for that I am sorry to my teammates, my fans, my fellow competitors, my sponsors and the hosts of this great event.”

Lochte’s lawyer, Jeffrey Ostrow, told USA Today on Friday that Lochte did not lie about being robbed at gunpoint. “That part of the story will never change,” Ostrow said. “We stand behind that.”

Ostrow urged Brazilian authorities to investigate the security guard who whipped out his weapon during the incident and demanded money. “(Lochte) knows that he was held up at gunpoint and forced to give up money and that he was robbed. That’s being overshadowed, and it’s unfortunate because people are focusing on other things or relying on what the Brazilians are saying as opposed to taking the time to really analyze that you can kind of see it both ways,” Ostrow said. 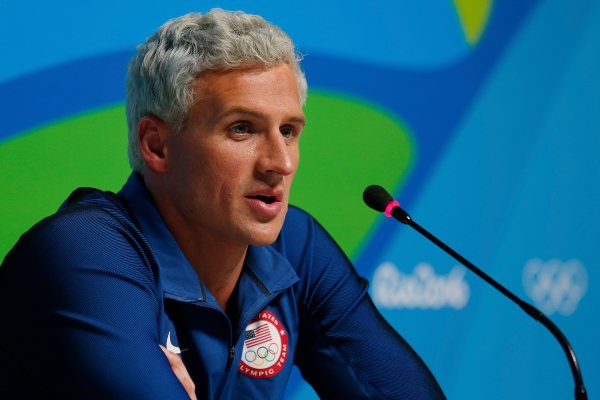