Why Indonesia, the World's Biggest Muslim Democracy, Should Accept Its LGBT Citizens

In his overseas trips, Indonesian President Joko Widodo has one favorite topic to discuss with his fellow leaders: Islam and democracy in his country. Indonesia “is a country where Islam and democracy can go hand in hand,” he said during a speech at the U.K. Parliament in April. In his visit at the White House last October, he told President Obama that Islam in Indonesia is “moderate,” “modern” and “tolerant.”

Indonesia prides itself not only for being a country with the world’s biggest Muslim population, but also for its tolerant brand of Islam. Its two largest Muslim organizations, the traditional Nahdlatul Ulama (NU) and the modernist Muhammadiyah, which have a combined membership of some 80 million, are touted as examples of moderate Islam.

But recent events belie the ideal image of the world’s biggest Muslim democracy. In recent months, Indonesia has seen an alarming rise of anti-LGBT sentiment, which Human Rights Watch, in its August report, calls “an unprecedented attack” on the rights of sexual minorities that was stoked by the government. Since January, people from across all sections of Indonesia life, from government officials, politicians, local media, Muslim leaders to even psychiatrists, have joined the chorus of homophobic condemnation, including calls to criminalize and “cure” LGBT people from mental illness.

Read: LGBT Rights in Indonesia Are Coming Under ‘Unprecedented Attack’

Vice President Jusuf Kalla told the U.N. Development Program not to carry out LGBT community programs in the country. Defend the Nation, a paramilitary training program that claims some 1.8 million participants, declared homosexuality as one of the nation’s enemies, along with communism and illegal drugs. There were controversies over gay emojis. A transgender Islamic boarding school in the city of Yogyakarta was forced to close down in February after years of existence, following intimidation from hard-line Muslims. And the mainstream Muslim organizations (the NU and Muhammadiyah) issued statements saying that LGBT “lifestyle” is “incompatible with human nature.”

The parliament and the Constitutional Court are the latest battlegrounds with attempts to legally persecute sexual minorities. Indonesian lawmakers are pushing for an anti-LGBT bill, saying it is necessary to protect society from what they term “the LGBT propaganda.” An Islamic pro-family group called the Family Love Alliance has submitted a judicial review to the Constitutional Court, asking the justices to revise the penal code and criminalize gay sex (as well as consensual heterosexual acts outside of marriage). During the latest hearing on Tuesday, Justice Patrialis Akbar signaled his agreement with the expert witnesses who argued the ban would be in line with moral and religious values, saying: “We are not a secular country.”

Founding father Sukarno, however, envisioned Indonesia as a secular, not Islamic state. There are no laws that penalize homosexual acts — except in Aceh province, which implements Shari‘a — but nor are there laws that prohibit discrimination against sexual minorities. This means the LGBT community faces an uneasy balance between disgruntled tolerance and daily prejudice. Anthropologist and Muslim feminist Lies Marcoes says that sexual minorities have long existed throughout the archipelago. “The problem, I believe, is not cultural, but how LGBT has become a political commodity to discriminate,” Lies tells TIME, adding that “since the reform [era], the public space has become more conservative.”

The fall of President Suharto in 1998 ushered in democracy and reform in Indonesia, yet women and religious minorities have become vulnerable to administrative and mob attacks. Hundreds of regional policies have been enacted in the years since that discriminate against minority groups. These include regulations on building houses of worship, night curfews on women and imposing Islamic dress codes. If there’s a lesson to be learned: discriminatory policies have emboldened hard-liners. Religious minorities, such as Christians, Ahmadi and Shi‘ite Muslims, have been driven away from their homes and houses of worship.

There were high hopes when Jokowi, as the current President is widely known, won the election in 2014. A humble, moderate Muslim politician who has a record of working with members of other faiths, he was seen as a figure who would defend pluralism and tolerance in this diverse nation. Two years on, however, human-rights issues have been put on the back burner. When his government revoked thousands of “problematic” regional bylaws in June, they were all regulations that affected businesses — there were none that discriminated against women and religious minorities.

On Aug. 11, on the day HRW released its scathing report, Jokowi’s spokesperson, Johan Budi, said that although the rights of LGBT citizens are protected, “there is no room in Indonesia for the proliferation of the LGBT movement.” His comments were alarming. First, freedom of assembly is a constitutional right. Second, while other democratic countries are advancing LGBT rights, Indonesia seems to be moving in the other direction.

Budi’s comments prompted a response from the Obama Administration. “We encourage Indonesia, which rightly prides itself on diversity and tolerance, to respect and uphold international rights and standards by ensuring equal rights and protections for all of its citizens,” said U.S. State Department spokeswoman Elizabeth Trudeau.

With democracy besieged in much of Asia and the Muslim world, Indonesia seems like a rare beacon. When it comes to the treatment of its LGBT community, however, the country faces two options: uphold its democratic credentials or pander to the intolerant voices. The biggest Southeast Asian country — with its national motto of Unity in Diversity — can be a true pioneering model of democracy if it embraces and is inclusive to its minority groups, including sexual minorities. Otherwise, Indonesia’s — and Jokowi’s — impressive claims simply ring hollow. 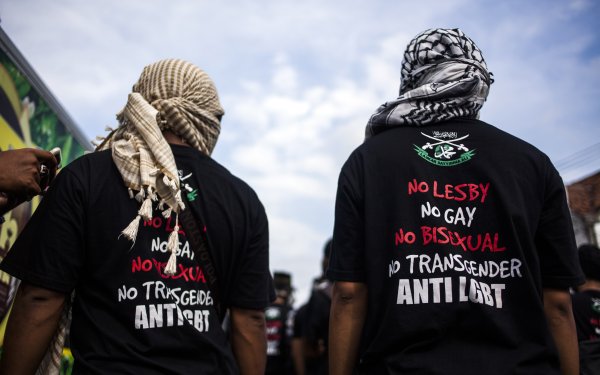 LGBT Rights in Indonesia Under 'Unprecedented Attack'
Next Up: Editor's Pick