These Are the Possible Outcomes for Lochte and Teammates

In an escalation of the controversy involving four American swimmers, Brazilian authorities on Thursday recommended that Ryan Lochte and Jimmy Feigen be charged with falsely reporting a crime. To be clear, a recommendation of a charge is not the equivalent of an actual charge. An actual charge in Brazil requires that a person be caught in the act or arrested pursuant to a warrant issued by a judicial authority. Put another way, Lochte or Feigen might not be charged at any point, although it could take days or weeks before that is determined. If Lochte and Feigen are ultimately charged with false reporting, a conviction on this particular offense normally results in a fine rather than incarceration.

Locke and Feigen, along with Gunnar Bentz and Jack Conger, have claimed that they were victims of an armed robbery when assailants posing as Rio police took their wallets at gunpoint. After investigating the claim, the Rio police could not corroborate it.

Earlier on Thursday, Rio’s police chief, Fernando Veloso, held a press conference in which he asserted that no robbery took place and that the swimmers had instead vandalized a gas station bathroom. The swimmers’ “stolen” money, according to authorities, was not stolen. Instead, the swimmers allegedly transferred the money on their own volition to the owner of the gas station. They did so, so the theory goes, in order to compensate him for damages they caused while drunk.

Whether the transfer of money was truly voluntarily remains the subject of debate. Reports suggest that two armed guards confronted the swimmers at the gas station and pointed guns at them. If true, the portrayal of the exchange of money as truly “voluntarily” would be problematic. Further, while surveillance video made public to some extent supports the account of Brazilian authorities—the swimmers are clearly at a gas station and there’s no evidence they were pulled over by assailants posing as Rio police—it does not show the swimmers engaged in any violent acts. There are also rumors that as many as three minutes are missing from the surveillance video and that those three minutes would show the swimmers forced out of a car at gunpoint.

Late Thursday evening, the U.S. Olympic Committee released a statement on behalf of its CEO, Scott Blackmun. In his remarks, Blackmun apologizes for the swimmers’ conduct and attempts to diffuse the crisis. “The behavior of these athletes is not acceptable,” Blackmun writes, “nor does it represent the values of Team USA or the conduct of the vast majority of its members.” Blackmun’s statement also reveals that the passports of Bentz and Conger have been returned and the two swimmers recently departed Rio.

The different legal situations of the four swimmers

Although the four swimmers are linked together in this crisis, their legal statuses are dissimilar. Obviously, two of them—Lochte and Feigen—are now the targets of recommendations that they be charged with a crime. The other two—Bentz and Conger—have not (yet) been recommended for charges. While those are important distinctions, the current whereabouts of the four may prove much more influential.

Let’s consider Locthe first. Although he has been recommended for a charge, Lochte has a major advantage over his three teammates: he’s in the United States. As I explained in another SI.com article, it would be extremely difficult for Brazil to successfully pursue an extradition of Lochte. The extradition treaty between the United States and Brazil does not authorize extradition for the criminal act of falsely reporting a crime. Even if it did, extradition is a lengthy process that must be approved by multiple persons at the State Department, Justice Department and federal courts.

To be sure, Lochte could suffer other legal consequences. Companies with which he has signed endorsement contracts could contemplate voiding or suspending those contracts on grounds that Lochte has violated “morals clause” language in those deals. Most endorsement contracts authorize an endorsed company with substantial flexibility in whether to exit or suspend a contract when an athlete attracts public controversy. Even if Lochte doesn’t lose any endorsement deals, this incident may damage his reputation and deter other companies from wanting him as a product endorser. In addition, as I explained this afternoon, both the International Olympic Committee and the U.S. Olympic Committee could take punitive action against the swimmers.

While Lochte may be in the best position legally, Feigen appears to be in the worst. Like Lochte, Feigen could soon be charged with a crime. But unlike Lochte, Feigen is still in Brazil. According to Blackmun, Feigen has provided Brazilian authorities with a “revised statement” and he hopes to secure his passport “as soon as possible.” If Blackmun is accurately describing Feigen’s current situation, there’s a good chance Feigen will be able to leave Rio in a matter of hours or days. Alternatively, if Feigen is charged, he would become a defendant in a criminal matter and would likely have to appear in court, possibly on multiple occasions. He’d be required to remain in Brazil until his case is resolved. In that scenario and unless Feigen and Brazilian authorities negotiated a plea deal (which could happen at any time), Feigen could be required to stay in Brazil for weeks or potentially longer. As detailed on SI.com, Feigen, if charged, would receive aid from the U.S. Consulate General in Rio, but that aid would not get him home.

Meanwhile, Bentz and Conger are not recommended for charges at this time, and Blackmun’s statement indicates that the two swimmers are leaving or have already left Brazil. They were removed from a flight Wednesday night. Brazilian authorities told media on Thursday that Bentz and Conger admitted that they made up the robbery story. Perhaps as a reward for their alleged admission, Bentz and Conger have not been charged. The two swimmers are not allowed leave the country without Brazil’s approval. Don’t be surprised if a condition of their departure from Brazil is a public apology.

Michael McCann is a legal analyst and writer for Sports Illustrated. He is also a Massachusetts attorney and the founding director of the Sports and Entertainment Law Institute at the University of New Hampshire School of Law. McCann also created and teaches the Deflategate undergraduate course at UNH. He serves on the Board of Advisors to the Harvard Law School Systemic Justice Project and is the distinguished visiting Hall of Fame Professor of Law at Mississippi College School of Law. He is also on the faculty of the Oregon Law Summer Sports Institute. 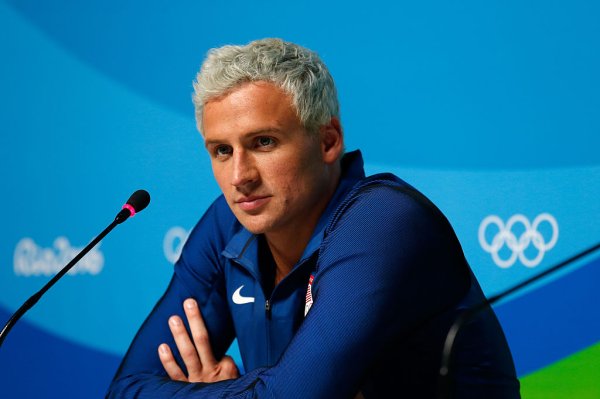 Ryan Lochte Has Never Played by the Rules
Next Up: Editor's Pick