Republican vice presidential nominee is diagnosing the problem with his running mate. What ails Donald Trump is the news media.

After three weeks of public and messy struggles, the Trump-Pence ticket is returning to a favorite tactic of failing campaigns: blame the woes on those who are chronicling it in real time. Throughout a town hall-style meeting in Manchester, the Indiana Governor kept returning to his grievances about coverage. Left unsaid: Trump, the former reality television star, is largely a creation of the media.

“Just about every day, the national media latches onto some issue about my running mate. It really does,” Pence said at a conference center in suburban Manchester, N.H. “I mean, the media is so busy parsing every word that Donald Trump said in the last 30 minutes, they don’t have time to cover what the Clintons have been up to for the last 30 years.”

Pence went on to cite news coverage of Democratic nominee Hillary Clinton’s emails, her aides’ ethics and foreign donations to her family’s foundation. “While the media was focusing on word choices by my running mate,” Pence said, “we that learned the FBI discussed opening a public corruption case against the Clinton Foundation, but the Obama Justice Department shut it down.” He was citing unnamed officials quoted by The Daily Caller, a conservative website.

To be sure, distrust of the media runs strong, especially among conservatives. New Hampshire voters are notoriously late to make up their minds, and relish a chance to prove outsiders wrong. Blaming journalists for a sinking campaign is nothing new. Usually, it’s coupled with complaints about polling methods, too. But it typically comes later in the campaign, not mid-summer, and not so strongly. American voters don’t like whiners or losers.

Pence seemed certain that his message to supporters, that the deck is stacked against them, could help energize allies. “It’s pretty rough out there. It’s like 2-on-1 most days with the media doing most of Hillary’s work for her. The good news is Donald Trump is still winning hearts and minds,” Pence said. “The most powerful media in America is you. Word of mouth has always—and will always be—the most powerful form of communication.” It’s good spin as to why the Trump campaign has yet to spend a dime on traditional general election television ads.

Pence, a dutiful running mate, kept the focus mainly on Trump and his slogan to Make America Great Again. He gamely turned questions from the audience into laudatory statements about Trump and brushed past questions from voters whom he didn’t fully understand.

At no point did Pence nod to the problems of Trump’s own making: his sloppy language, controversies over his policies that seem to shift with his mood, a campaign at war with itself. Trump’s polls are sinking, and Clinton is widening her advantages in a number of states. Privately, Republicans are groaning that the coming weeks will be marred by Trump’s stumbles and will drag with them local candidates.

Pence’s message to New Hampshire voters was a candid pay-no-attention-to-the-implosion and a dismissal of the staff shake-up this week that elevated an online provocateur to campaign CEO, a pollster to campaign manager and the sidelined of a veteran lobbyist who retains the title of campaign chairman. It was all the product of media lashing out, Pence said. The campaign was actually winning because, after all, that’s what Trump does.

“Donald Trump gets it, right? He’s a genuine article. He’s a doer in a game usually reserved for talkers. When Donald Trump does his talking, he doesn’t go tiptoeing around the thousands of rules of political correctness that the media and the elites impose,” Pence said. “He tells it like it is. And the American people hear him loud and clear.”

Trump’s poll numbers have slumped in the weeks after his nominating convention in Cleveland, and Republicans grouse that the campaign badly lags the offices and staffers that the Democrats have had in place. Instead, Pence said, the Establishment is conspiring to keep Trump down.

“It’s pretty amazing. The party in power, and their allies in the media, all think the usual things will work against him, right? You can just see it on their faces. They keep thinking they finally got him this time. They (have) finally done him in,” Pence said. “Donald Trump is still standing stronger than ever before and fighting for the American people. The man never quits.” 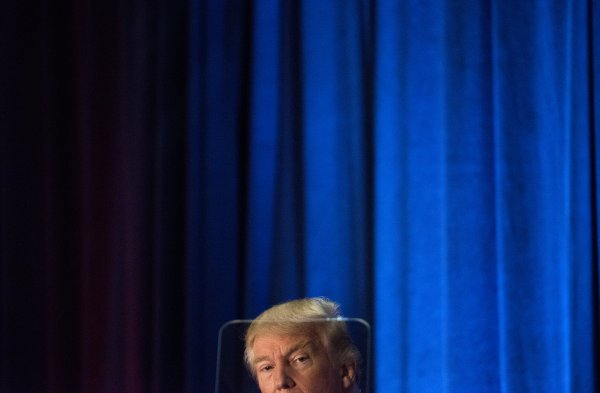