A soldier stands guard in a neighborhood dominated by the Mara Salvatrucha's gang in San Salvador, during an operation to take back gang-controlled neighborhoods, on Aug. 16, 2016.
Marvin Recinos—AFP/Getty Images
Ideas
By Mark Hetfield
Hetfield is the President and CEO of HIAS, a global Jewish organization for refugees

“Why did you go to Panama?” I recently asked an asylum seeker from El Salvador.“Why south instead of north?”

It is well known that El Salvador has the highest murder rate in the world. Neighbors Honduras and Guatemala do not lag far behind. People are fleeing for their lives, desperately searching for safety.

During a visit last month to the Panama office of HIAS, a global Jewish organization for refugees of which I am the president and CEO, I met with several clients seeking asylum there. I heard story after story, told by men and women with tears running down their faces, about how innocent families had been targeted by gangs and forced to flee their countries. Often, once one family member is targeted, all are targeted. Family after family told me they fled to “freedom” in Panama—freedom from their teenage daughters being forced to “marry” gang members, freedom from their sons feeling compelled to join the army just to escape gang recruitment, and freedom from being killed or extorted for wearing nice clothes or running a business.

Some HIAS clients had been raped by gang members, or had family members who had been. The police often won’t or can’t protect them. They, too, are sometimes under the control of the gangs.

“Colombian refugees arrived in Panama as singles and couples,” my Panamanian colleague explained to me. “Salvadorans always arrive as families, because whole families are under threat.”

Most Salvadorans cannot afford to go north, as the coyotes (smugglers) charge thousands of dollars to make it through Mexico to the U.S. Once in Mexico, more and more people are being caught by the Mexican police using U.S.-supplied resources, and are either deported back to El Salvador or, if they decide to apply for refugee status in Mexico, are imprisoned while they wait many months for a decision. If they proceed north and survive the desert, they will almost certainly get caught and be sent to a jail in the U.S.

Going south to Panama, on the other hand, you don’t need a smuggler. But surviving there presents its own struggles. It takes two years to get a refugee interview and, in the meantime, it is illegal to work. Various government authorities and police are constantly fining asylum seekers for working illegally. It is getting harder and harder for them just to buy food to feed their families in Panama.

Despite all that, Salvadoran families have tragically come to know what they will face if they flee north instead of south. If they can survive the journey to the U.S., they will face possible detention and deportation. Even mothers with children.

On Aug. 8, a group of 22 mothers from Central America seeking asylum were detained with their children in the Berks County “Residential” Facility in Pennsylvania. Despite the best efforts of advocacy organizations to get them released, many have been there for nearly 12 months, with their kids, in detention. Now the mothers, who are calling themselves the Madres Berks, have started a hunger strike.

In a letter to Homeland Security Secretary Jeh Johnson, they wrote:

On Sept. 20, on the sidelines of the U.N. General Assembly, President Obama will convene a summit on refugees. The world has long looked to the U.S. as a leader on refugees and asylum seekers and usually, we rise to the occasion. But for Central Americans, we are falling far short. By violating the Convention on the Rights of the Child’s prohibition against the detention of children, we are betraying our values as a country founded to be a safe haven for those seeking liberty.

The U.S. needs to lead a regional response to the Central American crisis not just with humanitarian aid and symbolic gatherings on the margins of the General Assembly, but also with deeds. We can start by ending the practice of jailing women and children asylum seekers, something the U.S. now does to “send a message” to discourage others from seeking asylum.

The U.S. should be sending a very different message. During this global refugee crisis, all countries of the world, starting with our own, must do more to share responsibility to ensure that refugees find welcome, safety and freedom, whichever direction they are fleeing. 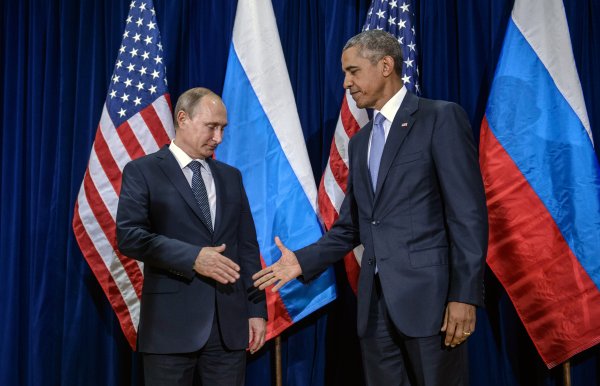 We Need a New Grand Bargain With Russia
Next Up: Editor's Pick