The season six finale of The Walking Dead saw Morgan break his no-kill code to save Carol from a rogue Savior. But if everyone’s favorite staff-wielding Alexandrian had been written back into the storyline when the show intended, he may never have picked up those moral guidelines.

Entertainment Weekly reports that on a commentary track for the “Here’s Not Here” episode on The Walking Dead: The Complete Sixth Season boxset, showrunner Scott M. Gimple reveals Morgan was originally supposed to reappear at the cannibal commune Terminus. “At the end of 4.16, Rick would say, ‘They’re screwing with the wrong people,'” he says. “And a gentleman would come out of the shadows of the train car and he would say, ‘Yeah, they are.’ And that would be Lennie [James], as Morgan. And it looked like it almost could have happened.”

However, he went on to explain that Morgan’s delayed introduction allowed the writers to include his backstory with Eastman — who taught him the peaceful art of Aikido. “The time was right,” Gimple says. “But Lennie had a commitment to another show, which allowed us to do something super cool, which allowed Morgan to go on a journey after this episode in season five to see how he catches up to Rick and the group.” 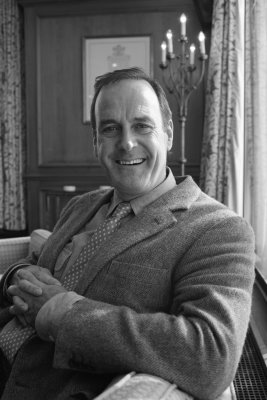