Brazilian authorities suggested Thursday that the U.S. swimmers who claimed they were robbed at gunpoint in Rio had made up the robbery following an incident in which they vandalized a gas station.

Swimmer Ryan Lochte and teammates Gunnar Bentz, Jack Conger and Jimmy Feigen claimed that they were robbed after leaving a party early Sunday morning by individuals posing as police officers. Brazilian authorities questioned the allegation just days after offering an initial apology, citing a lack of evidence and inconsistent claims made by the swimmers. Brazil subsequently issued orders restricting the swimmers from leaving the country.

“Their claim that they were the victims of assault or some kind of violence is not true,” said State of Rio de Janeiro Police Chief Fernando Veloso said in a televised press conference, according to a CNN translation.

Police said the swimmers were en route from a party to the Olympic Village in a taxi when they made a pit stop at a gas station. One or more of the swimmers vandalized the facility, damaging “some mirrors” and other things, the police said. An armed security guard at the station demanded that the swimmers pay for the damage, pulling a gun when one of the athletes appeared “disturbed somehow,” said Veloso. The group of swimmers paid for the damage—$20 in U.S. dollars and 100 Brazilian Real—they caused at the gas station in cash before departing.

Lochte has already returned to the U.S. The other three are still in Brazil and cooperating with authorities, according to the U.S. Olympic Committee. The police account of the incidents was consistent with the statements of at least one of the swimmers, Veloso said.

The athletes could face charges under Brazilian law for false communication of a crime and damaging private property, according to Veloso. He said that the investigation is ongoing and that the crimes were not significant enough to require the athletes’ arrest. 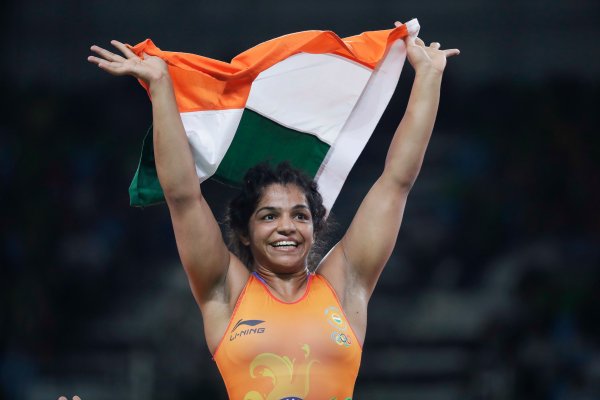 Meet the Female Wrestler Who Got India's First Medal in Rio
Next Up: Editor's Pick