The mystery surrounding what transpired the night swimmer Ryan Lochte and three of his Olympic teammates claimed they were robbed in Rio de Janeiro has taken several dramatic twists and turns, but many of the details of what transpired—and why—remain unclear. Here’s what we know, and what we don’t:

What did the swimmers claim?

Ryan Lochte, James Feigen, Jack Conger and Gunnar Bentz, all U.S. Olympic swimmers, claimed they were robbed early Sunday morning while leaving a party in a taxi by people posing as police officers. But the story varied depending who was telling it and when. At one point, Lochte said a gun was held to his head, but later he said the gun was merely pointed in his direction. He also initially claimed that his taxi had been pulled over only to later say the robbery had occurred at a gas station.

What are Brazilian officials saying happened?

Brazilian officials said that at least one of the swimmers vandalized a gas station in the Rio suburb of Barra da Tijuca. An armed security guard demanded the swimmers pay for the damage and the swimmers provided $20 in U.S. dollars and 100 Brazilian Real. The guard pulled out his weapon when one of the swimmers behaved “disturbed somehow,” said State of Rio de Janeiro Police Chief Fernando Veloso. The police say that the account comes from interviews with witnesses and video footage, as well as the testimony of one of the swimmers.

What do authorities and the swimmers agree on?

Both authorities and the swimmers said the group had been en route from a party at Club France to the Olympic Village when the incident occurred. All involved acknowledge that the swimmers had been intoxicated throughout the evening.

What does video footage show?

James Feigen, Jack Conger and Gunnar Bentz have been detained in Brazil and are cooperating with authorities, according to the International Olympic Committee. Lochte had returned to the U.S. already. Veloso said that Brazilian authorities have been in touch with the FBI regarding interviewing Lochte. The authorities could face charges for providing false testimony, a charge that could carry a six-month sentence, according to a USA Today report. Veloso said the investigation remains ongoing and no decision about charges has been reached.

How are non-Brazilian officials responding?

A U.S. State Department spokesperson acknowledged the incident and said it was “ready to provide all appropriate consular assistance.” After questions emerged about the claims, an International Olympic Committee spokesperson said he did not regret apologizing to the group. “These kids came here to have fun,” he said. “They made a mistake, life goes on.” 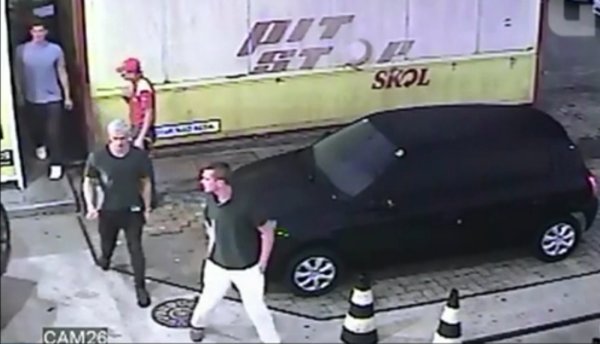 Watch Footage of Ryan Lochte at the Gas Station
Next Up: Editor's Pick