Unpacking the Court: Is Eight Enough?

Now that the Supreme Court has eight Justices, some conservative activists are fighting to keep it that way
Drew Angerer—Getty Images
By Massimo Calabresi

As the Senate prepares to end its summer recess on Sept. 6, one question looms larger than most: What will happen to Judge Merrick Garland? It has, after all, been more than five months since President Obama put forward his nominee to replace Supreme Court Justice Antonin Scalia, who died suddenly on Feb. 13. Republicans have refused to act on the nomination, leaving the U.S.’s most powerful judicial body one vote short of its nine-member bench. Thus far, that has caused the court to split 4-4 on decisions regarding illegal immigration, the sovereignty of Native American tribal courts and more.

Now leaders in both parties say the impasse could extend into the next President’s term. For conservatives, the attrition is strategic. Though Garland was considered a moderate pick compared to other candidates, his confirmation would mark the first reliably liberal majority on the court in 45 years. With cases on abortion, the death penalty and other hot-button social issues potentially before the court in coming years, it makes sense that Republican Senate majority leader Mitch McConnell is in no rush. He has said publicly that he won’t hold a vote on a nominee until after the election. Even then, he says, he won’t guarantee it.

As Hillary Clinton continues to lead in the polls, some conservative activists are hoping that delay endures. “Nothing should be ruled out,” says Curt Levey, president of the conservative Committee for Justice, “given that we’re really facing legal Armageddon.” Says one Senate Democratic staffer: “We’re in a new era where a 4-4 court for an extended period of time is a reality because of Republican intransigence.”

The Constitution does not require nine Justices on the Supreme Court. In the 19th century, the number Congress set shifted from five to seven to 10, before an 1869 law fixed it at nine. In 1937 President Franklin Roosevelt, frustrated by court conservatives who were blocking elements of the New Deal, proposed boosting the number of Justices to as high as 15. Congress and the public reacted badly to the “court packing” proposal, and after a series of liberal rulings in favor of some New Deal programs, FDR gave up on the plan.

But recent fights over lower courts have signaled a willingness to break judiciary taboos. Democrats blocked 10 of George W. Bush’s nominees to appellate courts during his first term, including to the D.C. Circuit Court, which often decides important cases involving U.S. government powers. In 2007, Republican Senator Chuck Grassley led a successful effort to shrink the size of the D.C. circuit from 12 to 11 judges, and later helped block Obama’s nominees to three open seats on that court. Democrats responded by barring filibusters for all judicial nominees except those tapped for the Supreme Court.

The most aggressive actors on the right are ready to escalate the war of attrition there too. If one of the current liberal Justices were to die or retire and Scalia’s seat remained unfilled, the thinking goes, the court would shrink to 4-3–and GOP appointees would once again have the majority. But other conservative court watchers, including some in the Senate, who acknowledge a discussion of a 4-3 strategy, say it was dismissed as politically unrealistic. A permanent change to the size of the court would require an act of Congress, signed by the President, superseding the 1869 act. And few think the public would react much better to a covert “court unpacking” than it did to FDR’s overt attempt to pack it during the Depression. Political pressure could return the court to nine members as early as next spring.

But inaction is the norm in D.C., and Republicans point out that Democrats might hold the court at 4-4 if faced with a Trump presidency. Senators in both parties have long since abandoned the idea that the courts should be free from politicization, switching positions on whether qualified nominees should be blocked depending on who’s doing the nominating. Little wonder, then, that the court is near historic lows in popular opinion, with only 42% of Americans approving of it and 48% disapproving in a recent Rand poll. Those aren’t Congress-level numbers yet, but they will only get worse if, for the next election cycle at least, a nine-member Supreme Court becomes another casualty of Washington’s increasing partisanship. 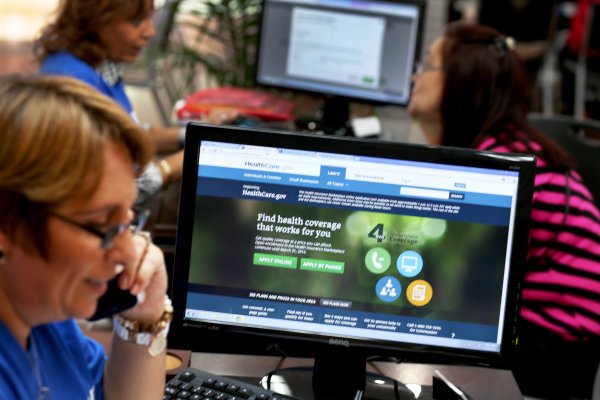 Cracks In the Obamacare Crystal Ball
Next Up: Editor's Pick