China's Xi Jinping Talks Up ‘One Belt, One Road’ as Keynote Project Fizzles

Chinese President Xi Jinping looks on during a meeting with his Serbian counterpart Tomislav Nikolic in Belgrade, Serbia, on June 18, 2016
Marko Djurica—Reuters
By Charlie Campbell / Beijing

Xi told a meeting in Beijing that more than 100 countries and international organizations have so far signed up to OBOR, which is touted as a revival of the iconic land and maritime Silk Road via a trade-and-infrastructure network spanning East Asia to Western Europe and south through Africa.

“The progress and results of the Belt and Road Initiative have been greater than expected,” China’s state newswire Xinhua quoted Xi as saying. The Chinese President has traveled extensively over Central Asia and Eastern Europe in recent months to champion the benefits of OBOR.

However, that message has been tricky to sell. OBOR covers over half of the global population, three-quarters of its energy resources and 40% of GDP, yet, crucially, geoeconomic fundamentals have shifted since its unveiling in 2013. Infrastructure routes through resource-rich central Asia were proposed at a time when raw commodity prices were high, but given today’s historic lows, the economic viability of such projects has suffered. Plus there is the added problem of China’s own economic plateau.

“The unbalanced economic development of countries along ‘One Belt, One Road’ is the main challenge,” says Xu Fengxian, a researcher with the Chinese Academy of Social Sciences. “These countries are opening to different degrees, and have different import-export trade and political situations.”

Compounding matters, these once freely navigable trade routes, trodden since the expeditions of Marco Polo in the 13th century, are now slashed by festering conflicts — most notably in Afghanistan, Pakistan, Burma (officially now Myanmar), Ukraine and large swaths of the Middle East. China’s own westernmost region of Xinjiang is also prone to outbreaks of strife.

“How China and Pakistan set about securitizing the China-Pakistan economic corridor will in particular be a litmus test for the viability of the Belt and Road Initiative,” says Alexander Neill, Shangri-La Dialogue senior fellow at the International Institute for Strategic Studies in Singapore.

Despite these challenges, Xi’s propaganda train hasn’t slowed. Every day Chinese newspapers teem with dozens of articles exalting the myriad benefits of OBOR. Academics frequently cite OBOR on research proposals, cognizant that any association will radically boost their chances of approval. The OBOR official website is on a recruitment drive ahead of its launch in October.

However, it is overseas where marketing OBOR needs to be improved. There has been a perception that OBOR is simply about China throwing cash around the region. However, “it’s actually supposed to be an inclusive project and Beijing wants international investors to get involved,” says Neill. “It’s not just about countries sitting back and waiting for China to arrive with investment plans and loans.”

Geopolitically, OBOR is seen as a rival to the Washington-led Trans-Pacific Partnership free-trade pact, which Beijing has opted not to join. And one of the principle benefits of OBOR is conflict avoidance with U.S. interests, given the Obama Administration’s “rebalancing” to Asia.

Yet convincing China’s neighbors of the benefits has proved problematic. Although Russia — nearing international pariah status since its annexation of the Crimea — recently inked a $6.2 billion high-speed rail deal, many countries remaining wary. In March, the Thai government shunned proposed Chinese financing for a $15 billion railway project and opted to pay for a less ambitious rail network itself. A similar $5.1 billion joint venture with state-run Indonesian enterprises has suffered from technical problems and mounting costs, reports the Jakarta Post.

“It’s fizzled a bit and hasn’t lifted off as they would have hoped, and a lot of that is to do with the message they are delivering abroad,” said Neill. “Some target countries felt a bit like deer in headlamps.”

Beijing’s overlapping disputes in the South and East China Seas may also be galvanizing suspicions that OBOR is a Trojan horse for extending its geopolitical clout, and dumping excess capacity abroad as its economy flags. As such, peacefully resolving these territorial quarrels and building political capital will take on new impetus for the Xi administration. Beijing has already launched a charm offensive with the Association of Southeast Asian Nations.

“Disputes in the South China Sea jeopardize the regional shipping and resource development,” adds Xu. “The problem should be solved among the countries near South China Sea. We need to reach a consensus on this issue.” 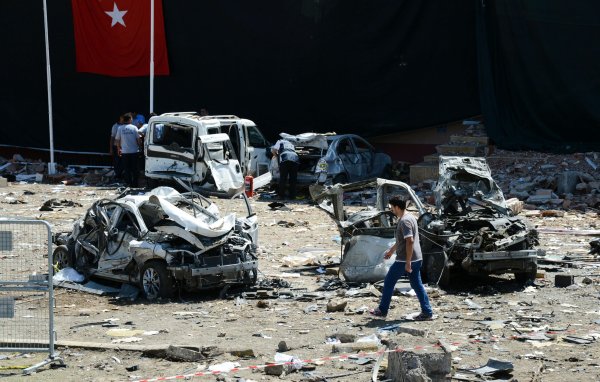 Car Bomb in Turkey Kills 3, Injures 50
Next Up: Editor's Pick