Michael Singleton and his mother Toya Graham outside their home in Baltimore on Oct. 14, 2015.
Marvin Joseph—The Washington Post/Getty Images
By Melissa Chan

Hundreds of people have donated more than $33,000 to help a Baltimore mother—who made national headlines last year for smacking her rioting teenage son—after that same son accidentally set the family’s home on fire last weekend.

Toya Graham, who was widely praised as “mom of the year” after she was shown on television repeatedly whacking her son’s head and pulling him from a protest, cried this week as she spoke to a local news station about how the blaze displaced her struggling family.

“I’m tired. I’m tired of the struggle. I feel broken,” she told WBFF-TV through tears. “You try to hold on. You try to be strong for your children. You try, but this is a lot.”

Her 17-year-old son, Michael Singleton, was home alone and frying chicken tenders in the kitchen Saturday when he stepped away to use the restroom, Graham told the news station. The teen made the grease fire worse when he came back and threw water at the flames.

He called 911 and made it out of the house without being injured, but the home was destroyed. “At the end of the day, I want him to know that I’m glad it wasn’t worse,” Graham WBFF. “I don’t know at this point where we’re going to go.”

Graham does not have renter’s insurance and is a single mother of six, according to CNN. She pleaded for spiritual guidance in a Facebook post after the incident, saying she was “feeling so lost.”

She wrote that she raced home from work to find her “home up in smoke” and has been left crying nonstop on her front steps since. “Wondering what I’m going to do,” she wrote. “Can’t stop the tears.”

“I’ve been fighting for so long,” she said in another post, showing photos of the damage. “I don’t have any more fight left.”

More than 900 people stepped in to donate more than $33,000 to help Graham after her family started a GoFundMe page. It surpassed their $5,000 goal in one day. 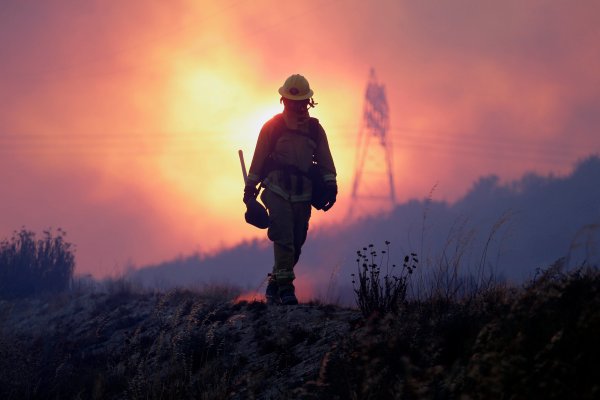 See Inside the Blue Cut Fire's Explosive Growth and Devastation
Next Up: Editor's Pick