Not so new for fall: Some of the remains found with the Ice Man
Institute for Mummies and the Ice Man
By Jeffrey Kluger

About 5,300 years ago, a man now known as Ötzi had a very bad day. Nobody knows exactly how things unfolded but it all ended with an arrow to the shoulder, a blow to the head and a cut—perhaps a defensive wound—to one hand. Either way, Ötzi wound up dead and was soon buried and preserved in a glacier in the Ötzal region of the Alps at the border of Austria and Italy. There he lay until two hikers found him in ice melt in 1991—a much warmer year in a much warmer era than the one in which he lived.

Ötzi—also known simply as the Ice Man—has been an object of both fascination and study since, and well he might be. Everything from his clothes to his quiver to the tattoo markings on his freeze-dried skin to the contents of his stomach (red deer and Alpine ibex appear to have been his final meal) have been preserved and offer a rare look into how Ice Age humans lived.

But the clothes have been a mystery. Clearly made of some kind of leather, they appear to be a patchwork of different hides stitched together at different times, suggesting regular patching and re-patching as one part or another wore out. What researchers have never been able to figure out, however, is just what species of animal lost their hides to keep Ötzi warm. Now, investigators have the answer, and as a study just published in Nature reveals, they went about their work in a resourceful way.

There are a lot of things that make ancient leathers difficult to study. For one thing, even the best-preserved samples are highly degraded, destroying the grain patterns in the skin that might identify the animal. And while DNA might survive millennia in a glacial deep freeze, the very process of making leather—scraping, heating, treating the skin with acids—destroys genetic material. The DNA that is identifiable often as not turns out to have come from the human handlers who performed the tanning.

But while nuclear DNA—the kind found in the nucleus of the cell—is destroyed, the DNA found in the cell’s energy-generating mitochondria might survive, provided you can recover enough of it. To do that in the Ice Man study, a team led by archaeologist Niall J. O’Sullivan of University College in Dublin, used a technique known as mitochondrial enrichment. As the name suggests, the method involves harvesting the mitochondrial DNA that’s available and using reagents and enzymes to concentrate and amplify it.

O’Sullivan and his colleagues harvested mitochondrial DNA from Ötzi’s coat, leggings, hat, shoelaces, quiver and loincloth—which is as close as you get to underwear if you’re stuck in the Copper Age. They were able to enrich the available DNA anywhere from four- to 620-fold, depending on the particular sample. What the subsequent genetic sequencing revealed was that Ötzi relied on a lot of different critters to keep himself clothed.

His leggings were goat, his loincloth was sheep and his coat was made of the skins of both species. “[T]he materials derived from both sheep and goats came from multiple individuals,” the researchers wrote. “[T]here were at least four sheep and two goats used in the manufacture.”

Ötzi’s shoelaces, meantime, came from cattle—similar to the leather laces in modern-day hiking boots—and the quiver was roe deer. The hat was the garment the Ice Man likely had to work hardest for: it came from a brown bear, suggesting Ötzi and his friends weren’t afraid to tangle with large carnivores if they had to.

The genomes of the cattle, sheep and goats are consistent with present day animals across most of Europe. The roe deer and brown bear, similarly, have contemporary kin in the Alpine region.

How Ötzi died remains a matter of speculation—a crime of passion, a fight over goods, a ritual sacrifice or some other ugly end. But how he lived—and how his Copper Age community lived too—is now at least a little clearer. 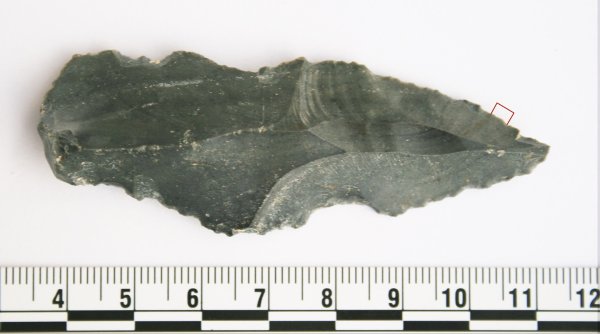 Humans First Used Tools to Eat Meat 250,000 Years Ago. Here’s What the Discovery Means
Next Up: Editor's Pick