Rio’s top ticket at any time of year is the beach. And if you wanted to put a price on it — complete with crashing waves under a near full moon — well, how about $110? That, or rather its equivalent in local currency, 350 reals, was the official price of the cheapest seats Tuesday for the beach volleyball at Copacabana. Long lines formed 90 minutes before the start of the match, such was the buzz. It felt like a World Series game, and, in a way, it was.

The women’s beach volleyball semifinal between Barbara Seixas and Agatha Bednarczuk of Brazil — celebrities simply referred to as Barbara and Agatha in these parts — and Kerri Walsh-Jennings and April Ross of the United States meant a great deal to hosts Brazil. So the victory feels that much better. Seixas and Bednarczuk handed Walsh-Jennings, the three-time defending gold medalist, her first Olympic loss on sand (she finished fourth as a member of the U.S. indoor team in Sydney in 2000).

The Brazilian defeat of the Americans in straight sets (22-20, 21-18) was one of the most electric moments of these Olympics. Seixas and Bednarczuk will try to clinch gold Wednesday night, and a Brazilian team will play in the men’s beach volleyball final on Thursday. With Brazil failing to meet expectations in the medal count, and the women’s indoor volleyball team and women’s soccer teams eliminated from the Olympics on Tuesday — and Brazil’s other women’s beach team, Larissa and Talita, losing to Germany in an earlier semifinal — these prospects are having an exhilarating impact.

“We needed that so bad,” says Bernard Deixeira, a businessman from northern Brazil, after watching Seixas and Bednarczuk clinch the match from the stands.

“Finally we’re doing something good,” says Carmen Donat, who traveled from Sao Paulo to watch the game. “There’s hope for us.”

The packed venue was probably split around 85-15 in Brazil’s favor, with the rest of the fans waving red, white, and blue and trying to will Walsh-Jennings to a fourth straight gold. Brazilian fans booed Walsh-Jennings and Ross while they served (some beach players have complained about the Brazilian’s booing), but, says Walsh-Jennings, “I honestly didn’t hear one boo. We heard cheering for good volleyball. For good players. That’s how I boil it down. It didn’t make me nervous. It didn’t make me upset.”

She added: “To not go to the finals of an Olympic Games is absolutely devastating.”

Walsh-Jennings and her former teammate, Misty May-Traenor, made beach volleyball a staple of Olympic prime time programming in U.S. At 38, Walsh-Jennings is still not sure this will be her last Olympics, but, as she left the stadium, a group of Olympic volunteers gave her a round of applause that felt almost valedictory. She hugged a few friends, then walked past a bar on the other side of a fence, where a group of Americans rose and gave her a standing ovation. Fans wearing Brazil shirts tried snapping pictures. She then turned a corner, put a towel around her waist, and walked alone, towards a very unfamiliar feeling: playing for bronze, which she does on Wednesday. 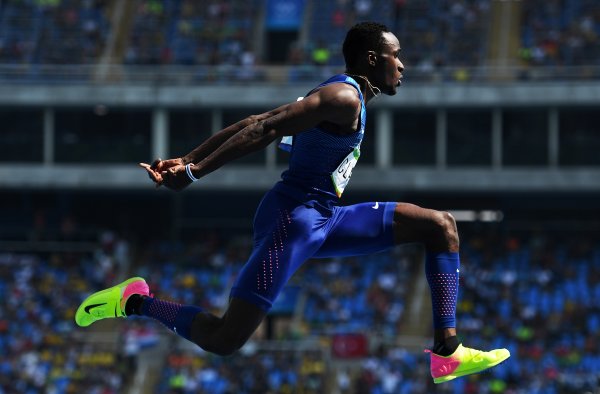 U.S. Olympian Will Claye Wins Silver in Rio—Then Proposes to Girlfriend
Next Up: Editor's Pick