China May Not Have Enough Arable Land to Feed Its People. But Big Changes Are Coming

The character that adorns Liu Chengbao’s gateposts means “good luck.” Not that he’s seen much of that recently. Rising at 6 a.m. each day, Liu leaves his wife and father in his self-built, four-room house and trudges toward the terraced foothills of northern China’s Six Ring Mountains. The 51-year-old ekes out a living by growing corn and potatoes on his 0.65 hectares of land in Gansu — a dumbbell-shaped province roughly the size of California and famed for its kaleidoscope-colored mountains of blue, yellow and crimson ribbons. Only 300 people remain in Wang Meng village, where Liu lives, and no one is particularly sprightly — young people leave ever earlier these days. “I’m too old to get a job the city,” says Liu, “I don’t have the strength.”

Each year, Liu takes home around $1,500, which just about pays for his two children’s higher education in Lanzhou, Gansu’s sprawling capital. He has no savings. Other than his crops, he raises two cows and tends a small patch of vegetables. “We only eat meat at Spring Festival [Chinese New Year],” he says. When he’s not farming, Liu earns $15 a day as a local construction worker, carrying sticks or mixing concrete. Like all his neighbors, he uses pesticides and fertilizer on his fields. “It makes the yield better,” Liu says, “but I use less on the vegetables that we eat ourselves.”

China’s food security relies on farmers like Liu — and it’s increasingly unsustainable. The nation of 1.3 billion accounts for almost a fifth of the world’s population, yet boasts just 7% of arable land. Moderate to severe soil degradation affects more than 40% of the country, exacerbated by overuse of fertilizer, intensive grazing and the reliance on biomass for rural energy. While China’s belching factories hog the headlines, experts say agriculture rather than industry exerts the biggest toll on the environment.

The effect is a downward spiral: poverty and land degradation feed each other. Last year, China produced 600 million tonnes of food — the 12th straight annual rise. But over the next three decades some 300 million Chinese are expected to abandon once productive fields for jobs in the city. Valuable arable land is gnawed away to build urban clusters, where the consumption of meat, grain and diary products is far higher. The average Chinese now eats 63 kg of meat a year, with an additional 30 kg per person expected by 2030. Already, 70% of China’s corn is used to feed livestock rather than the populace.

Faced with this growing crisis, the Chinese Communist Party (CCP) has been taking drastic steps to safeguard the nation’s food security. Significant acquisitions have been made overseas, including Australia’s largest dairy, over 324,000 hectares of farmland in Argentina and soybean-processing plants worth several billion dollars in Brazil. At home, tax has been reintroduced on fertilizers and pesticides and the series of incentives and subsidies that benefit farmers like Liu have been rejigged. Crops that are ecologically taxing, unprofitable and suffer from overcapacity — like maize — will have government support slashed, but those that are in demand and locally sustainable — soya, for example — will have inducements enhanced. It’s a revolution with serious risks for the legitimacy of the CCP should food prices soar and farmers struggle to make ends meet. “There could be massive social unrest if they screw up the agriculture industry,” says Erlend Ek, an agriculture expert at the China Policy research firm. “There hasn’t been this big of a change maybe since the Great Leap Forward.”

That catastrophic industrial experiment, instigated by Mao Zedong in the late 1950s, lies at the root of China’s current food-security woes. The Great Leap Forward was an attempt to modernize Chinese industry by abolishing private property and grouping workers into communes. But following the death by starvation of 30 million people, the forced collectivization of land was rolled back and families were bequeathed a small plot — typically 0.65 hectares, like Liu’s — to farm and feed themselves. Apart from a smattering of large, paramilitary-run state farms around the nation’s periphery, practically all of China’s tillable land remains divvied into these morsels. (By comparison, the average size of American farms is 179 hectares.)

“Chinese agriculture is effectively a cottage industry,” says Sun Chang, chairman of Black Soil group, which aims to modernize Chinese agriculture by consolidating these plots into larger farms. “China is so far behind the U.S., Australia or Europe because of unorganized, subscale farms with no scientific management.”

Because of these inefficiencies, staple crops in China are on average two to three times more expensive to produce when compared with the U.S. Yet China is determined to stay largely self-sufficient. In Gansu province, alfalfa is being grown as a high-quality, ecologically sound substitute to traditional forage. In southern Guangdong province, huge vats of wriggling insects are being cultivated as a high-protein addition to animal feed that naturally boosts immunity, reducing the need for antibiotics. Scientists are breading tiny wasps called Trichogramma, which feed on the eggs of destructive pests, replacing toxic insecticides. In Jilin province, pigs are reared on a meter-thick bed of microbe-infused rice husk and sawmill, which turns their excrement into sweet-smelling compost for the fields. Most incredibly, salmon and trout are being farmed in the arid Gobi Desert.

Read More: You Won’t Believe the Source of the World’s Most Sustainable Salmon

In the specialist world of fish farming, Rustan Lindqvist is a proud maverick. The Swede grew up fishing for salmon and trout in the frigid rivers south of Gothenburg, then spent 25 years working in aquaculture across Scandinavia. In 2012, he chanced upon plans to open a recirculation aquaculture system (RAS) farm in China’s Xinjiang province — quite literally the farthest point on earth from any ocean. Instead of farming in a natural river or lake, RAS uses deep wells to fill large indoor tanks. Fish at staggered stages of maturation are kept under meticulously controlled conditions. No longer does success rely on a fickle climate. “I thought someone finally understands the full potential of the RAS system,” says Lindqvist, who became the architect of the project. “You can actually build it in the middle of the desert.”

China has a long legacy of taming the environment. Two millennia ago, huge swaths of the Turpan basin, the hottest and driest region of what is modern-day China, were transformed into verdant pasture via a network of deep karez wells stretching over 5,000 km. Reforestation has also taken root due to the Yellow River Loess Plateau Watershed Rehabilitation Project. Launched by the World Bank in 2004, it has turned some of northwest China’s most degraded land productive again. The area is home to 50 million people and gets its name from the loess soil — a nutrient-rich though dusty composition that is inordinately prone to erosion when stripped of vegetation. And that is exactly what centuries of ever-swelling herds of free-grazing goats and sheep has wrought — transforming once lush hill and vale into a rippled sandpit.

Following three years of observation and consultation, scientists partnered with the local community to end free-grazing practices. Livestock was confined to pens and soil erosion arrested by forming reservoirs and terracing shallow slopes for crops, with fruit trees on steeper inclines. Ownership rights were enshrined for local participants, thus ensuring the continued maintenance of rehabilitated land. “This is transformation and change on a landscape about the size of France,” says Juergen Voegele, the project’s former task team leader for the World Bank.

Read More: The Environment Is the Silent Casualty of Beijing’s Ambitions in the South China Sea

Similar tactics are now being replicated all over China, boosting the quantity of so-called high-quality farmland. Currently, these prime fields comprise 30.4 million hectares, and by 2020 the government wants to increase that to 53 million to 67 million hectares — around half of all arable land in the country. To increase efficiency, China is also drafting a rural-land contract law, which for the first time will allow farmers to legally lease their land to a larger, consolidated farm. Sun’s Black Soil group has two pilot projects over 750 sq km — the size of Singapore — in northern China’s Heilongjiang province and has eyes on expanding. “Farmers are essentially turned into workers,” says Sun. “They don’t have to worry about working capital, standards, seeds, chemicals, buying equipment, sales. Only by doing this can you ensure food safety.”

It’s an idea that appeals to Liu. “Most local farmers would like this plan,” he says, as an old man hauls a wooden donkey cart by hand nearby. “If farmers could be paid 100 yuan [$15] per day, including lunch, and stay on their land, I think they would agree.” Liu’s only concern is providing for his family. That must change. For China to safeguard its food security, farmers need the luxury of caring about what they put on the nation’s dinner tables. 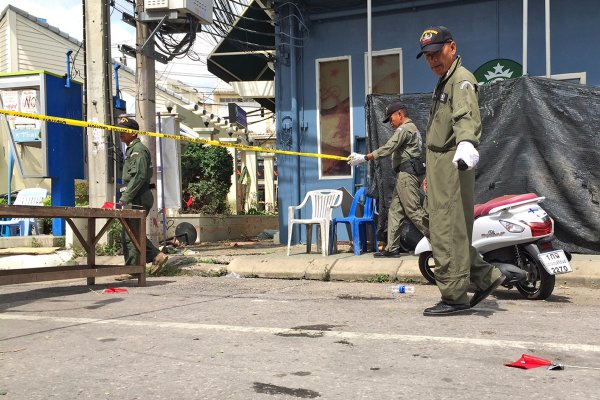 Thai Junta: Forget the Bombs, Come and Catch Pokémon
Next Up: Editor's Pick