The utter dominance of Michael Phelps has been the reigning story of the Rio 2016 Olympics — and his most memorable moment on social media has probably been the meme-tastic snapshot of the swimmer preparing for his 200 meter butterfly semifinal, with rival Olympian Chad le Clos just a few feet away from him. South Africa’s Le Clos, who at the same moment was shadowboxing as his own preparation, beat Phelps at the same event in 2012.

But Phelps beat him this time, and the internet went crazy for the intense look, quickly giving it its own name — #PhelpsFace — and spawning a steady stream of jokes, memes, and a tattoo. But what was really going on when Phelps made the now-iconic expression?

“I just had music going on in my head. I had thoughts going on in my head, spitting water a little bit all over the place, so I was in my own zone,” the 28-time Olympic medalist told TODAY on Tuesday. “I was not intentionally mean mugging him or giving him a dirty look.”

So there you have it, straight from the source: it wasn’t actually a death stare aimed at Le Clos after all. Just the look of concentration that the Greatest Olympian of All Time musters when he prepares to break records in his swan song to the sport.

See the face and some of his other best Olympics faces below. 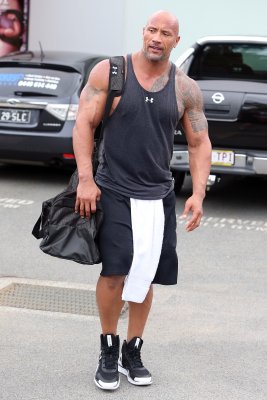 Watch The Rock, Chris Evans, and More Crush the 22 Pushup Challenge
Next Up: Editor's Pick