There wasn’t a whole lot for Russia to love about Donald Trump’s foreign policy agenda, at least not the version of it that he recited on Monday from a pair of teleprompters at a university in Ohio. Still, the reporters at the Kremlin’s main television station had enough to work with. “Crush and destroy!” began the teaser at the top of their Tuesday morning news bulletin. “Trump has voiced his strategy for the destruction of ISIS. Whom has he chosen as his ally?”

Among others, he’d chosen Russia — though not as enthusiastically as Moscow might have hoped. In fighting ISIS and other terrorist groups, Trump said, the U.S. “could find common ground” with Russia, which also has “much at stake in the outcome in Syria.” This was, at most, a sign of his willingness to work with Russia on issues of mutual benefit. But it did not come close to the sort of pronouncements that have made Trump the sweetheart of Moscow’s foreign policy establishment.

He did not reiterate his earlier promise to “look into” lifting the sanctions that the U.S. has imposed against Russia for its military incursions in Ukraine. At no point in the speech did he even mention Ukraine. The NATO alliance did come up, but this time Trump didn’t question whether the U.S. would defend its NATO allies in the event of a Russian attack. Instead, he pledged to “work closely” with NATO against international terrorism, and he explicitly backed away from his earlier claim that the alliance is “obsolete.”

His admirers in Moscow have been counting on more than that. Back in February, when Trump’s chances of appearing on the Republican ticket still looked pretty shaky, one of the Kremlin’s favored ideologues was already prepared to saddle him with Russia’s hopes for the end of U.S. dominance in world affairs. “Maybe, that redhead rude Yankee from the saloon will get back to the problems inside the country and will leave humanity alone,” wrote Alexander Dugin, an influential author and theorist of Russian imperialism.

Dugin seemed more enamored than ever of that Yankee from the saloon in a phone interview last week. “Trump is not only our candidate,” he told TIME. “He is the savior of the USA.” The brand of isolationism that Trump has been preaching under the banner of “America first” was something that “we didn’t even dare to hope for from the Americans,” says Dugin. For the first time in a century, it would mean that the U.S. might cease to pose a challenge to Russia’s ambitions in Europe and the Middle East by simply withdrawing from these theaters of geopolitical rivalry.

“Trump can change the world,” Dugin told me. “He can save America from its own imperial overreach. He can build a relationship with us, and he can stop the carnage in the Middle East by simply spitting over his shoulder and saying, ‘I’m sick of it. Let’s go.’”

But that was not the program Trump set out on Monday. Just take his stance on the war in Iraq. Had he been in the Oval Office after the U.S. invaded that country in 2003, Trump said that he would have kept U.S. troops stationed there indefinitely in order to “safeguard the oil and other vital infrastructure.” Appearing to veer away from his script, he added, “I was saying this constantly and to whoever would listen: keep the oil, keep the oil, keep the oil.”

The Kremlin would not have liked the sound of that. For President Vladimir Putin and his top security advisers, it is practically gospel that the U.S. has been plotting for decades to dismember Russia and seize its oil. This is the endgame they tend to see behind every aspect of U.S. policy toward Russia, as Putin himself suggested in his famous parable about Russia being the bear that guards the taiga (or forest). “As soon as he’s chained they will tear out his teeth and claws,” Putin said in late 2014. “As soon as, God forbid, that happens, then they no longer need the bear, and the taiga will be taken over.”

So it would not have been exactly comforting for Putin to hear Trump talk about seizing and holding the natural resources of a foreign state. At the same time, Russians tend to appreciate that kind of honesty about a superpower’s true intentions. Even during the Cold War, the Kremlin often preferred to deal with more conservative American statesmen, because they were less prone to cloaking their real agenda with talk about the need to promote democracy and human rights.

That prejudice persists to this day, says Gleb Pavlovsky, who served as an adviser to Putin between 2000 and 2011. “There is that old ghost in the Kremlin machine,” he says, “that belief that more conservative, more anti-liberal candidates turn out to be more willing to negotiate.” In the current election cycle, this has again served as a “basis for [the Russian] assessment of Trump.”

So if the Republican nominee’s remarks on Monday were cause for any disappointment in Moscow, it did not show in the coverage of his speech on state TV. In their four-minute segment, the anchors continued to shill for his campaign while casting his rival, Hillary Clinton, as the latest figurehead of the great anti-Russian conspiracy.

“When they sleep, they dream of making a profit from a new Cold War with Russia,” the report began, referring to Clinton and her supporters. As for Trump’s policy of “realism” in foreign affairs, the reporter said, “it would set clear goals for future victories while also accounting precisely for failures.” The report did not mention Trump’s remarks about keeping Iraqi oil, nor did his pledge to work closely with NATO earn any of the journalists’ attention.

Instead they moved swiftly on to defending Trump’s campaign manager Paul Manafort against accusations of “financial doping.” This was the term the Russian anchors used to describe Monday’s report in the New York Times, which revealed that Ukraine’s new government is investigating Manafort for alleged corruption. Citing a financial ledger uncovered after the 2014 revolution in Ukraine, the Times reported that Manafort was due to receive $12.7 million from Ukraine’s pro-Russian government before it was chased out of power that year.

Although the Russian news report showed a screenshot of the handwritten ledger, it insisted that there is no proof of the claims against Manafort, and translated his denial of the allegations into Russian. Even by the standards of Russian coverage of the Trump campaign, Tuesday’s segment was particularly glowing. And that is not likely to change.

Read more: 5 Things You Need to Know About Paul Manafort

Viewed from Moscow, Trump still looks a lot more promising than his Democratic rival, whose history of bad blood with Putin on a range of issues has sealed her reputation in Russia as the worst of all possible candidates, says Fyodor Lukyanov, a foreign policy expert in Moscow. “Trump presents a different narrative, which in many ways corresponds to what Putin has always said.”

His speech on Monday may not have lined up as well as usual with Putin’s views on global affairs. But most Russian analysts expected that gap to emerge ahead of November, as the polls force Trump to back away from some of his more inflammatory comments. In the end, what matters to Russia is not so much the rhetoric that comes out of Trump’s mouth on any given day. It’s the fact that a U.S. presidential candidate has come this far while calling for the U.S. to keep turning inward.

“Right now,” says Lukyanov, “the cycle of American dominance in the world is ending and a new one is beginning.” Against that backdrop, all of Trump’s talk about foreign policy “realism” and putting “America first” have seemed symptomatic of a much broader shift in the U.S. electorate, about 40% of which, according to the latest polls, is still prepared to vote for Trump.

“It’s a different world we live in,” Lukyanov says. “To some extent, this sort of American disengagement is not only possible, it’s inevitable, even if Hillary will be President.” That, at least, is Russia’s hope. 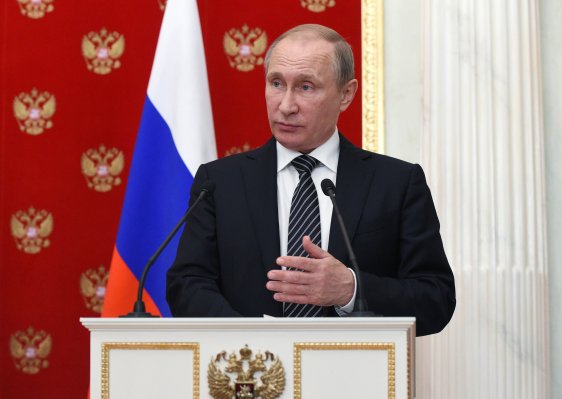 This Is Why Vladimir Putin Is Accusing Ukraine of Terrorism
Next Up: Editor's Pick