Jennilyn Olayres grieves beside the coffin of her partner Michael Siaron on July 28, 2016, after he was found dead in the streets of Manila with a crude cardboard poster left behind by the killers saying "Drug Pusher" — a claim she refutes. Hundreds of people have died since President Rodrigo Duterte won a landslide election in May, promising to rid society of drugs and crime in six months by killing tens of thousands of criminals
Noel Celis—AFP/Getty Images
Ideas
By Miguel Syjuco
Miguel Syjuco is the author of the award-winning novel Ilustrado. He lives in Manila and is a professor at NYU in Abu Dhabi.

In a span of six weeks, the Philippines’ new President, Rodrigo Duterte, has made international headlines for the hundreds of suspects killed in his war on crime. Since he took office on June 30, an average of 13 people a day have been either assassinated in public by masked assailants, killed by police without further investigation, or found as unidentified bodies on the streets, often balled up in packing tape with signs saying variations of: “Don’t follow me, I’m a criminal.” Duterte’s supporters celebrate these killings as necessary comeuppance, while his critics condemn the violence as precarious violations of due process and human rights. Yet the President’s seemingly outrageous actions are merely part of the Philippines’ deeply entrenched culture of impunity. What is frightening is that so few people realize that yet.

President Duterte’s approval rating was recently a historic 91%, and he is seen by fans and foes alike as decisive and effective, promising sweeping reforms and bringing about the surrender of tens of thousands of drug users and self-confessed dealers before they can be killed. Yet Duterte has also vowed to pardon any police and military involved in the extrajudicial killings, while also pledging to pardon himself. He has ensconced his daughter and son as mayor and vice mayor of the city that he ruled for two decades, while also refusing to fully answer allegations about hidden wealth.

More alarmingly, in what seems an effort to systematically undermine the traditional democratic checks and balances to his authority, Duterte has threatened to shut down the legislature if it hinders his plans, invoked the specter of martial law when criticized by the Chief Justice of the Supreme Court, and insulted concerned foreign ambassadors. He has chipped at the influence of the Catholic Church by emphasizing its corruption. And he has warned that members of the media are not protected from assassination: “The Constitution can no longer help you,” Duterte told reporters, “if you disrespect a person.”

These maneuvers recall those of the infamous despot Ferdinand Marcos, a dictator much respected by Duterte. The similarities should give us pause. While the new President’s predilection toward violence is being justified as necessary, there is little difference between taking the law into one’s own righteous hands and being wrongly above the law. This casts him clearly alongside his political peers, who have always evaded punishment, and who have yet to be targeted in Duterte’s campaign against criminality.

Take, for example, former President Joseph Estrada, who was sentenced to life in prison for plundering allegedly more than $80 million. Political expediency saw him pardoned by his successor, Gloria Arroyo, and he is now mayor of Manila while his relatives are Senators and Congressmen. Even his mistress now rules as mayor of his traditional bailiwick.

Similarly, former President Arroyo became linked to a long list of corruption scandals during her nine-year regime, yet she was re-elected to Congress while under house arrest on various charges of corruption. Duterte offered to pardon her a few weeks before the Supreme Court (composed of a majority of her appointees) acquitted her of the charge of plunder. Despite still facing a charge of graft, and thus barred from leaving the country, Arroyo has recently been named Deputy Speaker of Congress. Members of her former Cabinet now comprise the majority of Duterte’s inner circle.

It is not only Presidents who seem untouchable. Tito Sotto, a TV comedian turned politician, was pilloried by citizens for his blatant plagiarisms in his multiple Senate speeches against a reproductive-health bill that would provide care to women, yet he received no censure from his legislative cohorts. Meanwhile, Congressman Romeo Jalosjos, serving two life sentences for raping an 11-year-old girl, won re-election, twice, from behind bars, and enjoyed his regular game on the tennis court he had built in the maximum-security prison; he was pardoned by Arroyo only 10 years into his conviction. Similarly, members of the Arroyo-allied Ampatuan clan have been charged with the massacre of 58 political opponents and journalists, yet seven years later they have still escaped conviction. As has former Senator Juan Ponce Enrile, a Marcos henchman, who weathered many scandals throughout five presidencies; charged with plundering nearly $4 million, he is out on bail because of his advanced age. These are but few of many examples.

Best representing this culture of impunity, however, is the family renowned to have refined it: the Marcoses. They fled the country in 1986 with billions of dollars in cash and assets that are missing till this day. After the dictator died in 1989, his wife Imelda, of the thousands of shoes, and her children returned unpunished and regained high office. In this year’s election, former Senator Ferdinand Marcos Jr. lost the vice presidency by a mere 263,473 votes (the office is elected separately from the presidency). Despite ongoing nationwide protests and court cases still unresolved for the victims of the strongman’s martial law, the laundering of the dictator’s legacy is nearly complete: Duterte has ordered next month’s transfer of Marcos’s mummified corpse from its refrigerated mausoleum in the country’s north to Manila — for a burial, with pomp, in the best location in the nation’s Cemetery of Heroes.

To outsiders, all that seems outrageous. To Filipinos, it’s just politics as usual — the manipulations of a game of thrones, so to speak. After every election, officials abandon any party loyalty to join the winning candidate. During any administration, many a politician is caught doing something too criminal for the incumbent to leave unpunished. Over the years, alleged political pilferers leverage their influence to support an opposition that can eventually throw out their cases, or grant pardons, or return them to power as needed allies.

Duterte claims to be the antidote to all that, and his many supporters believe him to be the savior our country needs. But this hope is where the danger truly lies. The most vociferous among his fans, themselves now anointed by his very popularity, are inadvertently perpetuating that culture of impunity. Many of his online supporters gained sudden renown only by defending Duterte loudly, and when your new President has a 91% approval rating and can do no wrong, anything you say or do on his behalf is similarly unassailable. That’s dangerously heady for both pundits and trolls, who now shout down opposition, cast as bias any legitimate concerns, allege that Duterte’s critics are in the pay of drug lords, threaten death or rape to dissenters, and seek to publicly shame objectors whenever they can.

This assault on civil discourse and consensual disagreement is undermining the citizenry’s ability to speak freely, and only the powerful politicos stand to benefit from a population so divided. History has shown how systematic victimization of so-called degenerates (communists, counterrevolutionaries, homosexuals and now criminal elements, like alleged drug pushers) can easily swing to anyone else being targeted for voicing unpopular opinions. With our entrenched culture of impunity, that can only add up to the further disempowerment of Filipinos. As the Roman poet Juvenal asked: “Who will guard the guards themselves?”

Duterte’s campaign slogan was: “Change is coming.” Will that change prove for the good? Or will the new President’s promises make the Philippines less safe in the years ahead? 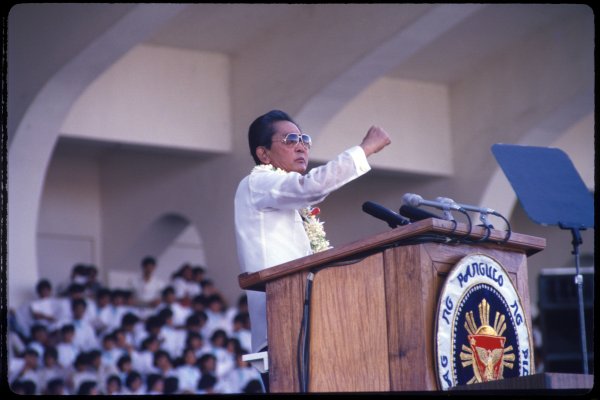 Body of Philippine Dictator Marcos to Be Moved to Hero's Cemetery
Next Up: Editor's Pick