Chinese Swimmer Speaks Out About Having Her Period During the Olympics

Chinese swimmer Fu Yuanhui nonchalantly broke a lasting taboo by speaking openly about being on her period during the Olympics.

After Yuanhui competed with her teammates in the 4×100-meter medly relay, where they came in fourth, she admitted to the reporter that she didn’t feel well because of her period.

Crouching on the ground and clutching her stomach, Yuanhui eventually stood up and said, “I feel I didn’t swim well today. I let my teammates down.”

“Because my period came yesterday, I’m feeling a bit weak, but this is not an excuse.”

According to the BBC, people in China were posting on social media app Sina Weibo about the health risk of a woman swimming on her period, setting off the hashtag, #FuyuanHuiPeriod.

“Someone accused Fu of lying, asking how she could have gone in the water on her period,” Weibo user Dvingnew wrote, according to the BBC. “Chinese people have prejudices about tampons – as a woman over 30, I’d been ignorant, and full of fear, about tampons until now too.”

Gynecologist Dr. Jen Gunter, a member of the American Congress of Obstetrics and Gynecology, says it’s entirely false that menstruation contaminates pools. “It’s not any kind of public health risk,” Gunter told Today.com when asked about a similar discussion that popped up in Tbilisi, Georgia, after a woman was shocked to see a sign at her pool and fitness club instructing women not to swim while on their periods.

Gunter explained that pool water doesn’t come in and flush out menstrual blood while women are swimming. And while it’s possible that something could leak out, even past a tampon, it would be minuscule.

“To hone in on menstrual blood is ridiculous,” Gunter said, when there’s also sweat, urine and fecal matter to consider. “That is why they put chlorine in a pool, because humans secrete.”

Gunter was asked about the topic because of a viral Facebook post in which pool member Sophie Tabatadze posted a photo of the sign on Facebook, calling out the Vake Swimming Pool and Fitness Club for “mysogyny.”

“Dear Ladies! Do not go to the pool during periods,” the sign says.

“Vake Swimming Pool And Fitness Club, do you even realize how offensive this is?” Tabatadze asks in her post. “And, by the way, since according to your rules we are not allowed to use a swimming pool 5-6 days each month, do we get a preferential price compared with men? #mysogyny #mysogynyinaction”

Her post set off a heated discussion in the comments, with people arguing in favor of the pool, saying that it’s unhygienic for women to bleed while swimming. Tabatadze fought back, saying that what the pool is doing is sexist body shaming.

“This is exactly what it is: shaming women for their periods, reinforcing stigma and stereotypes associated with it,” Tabatadze writes. 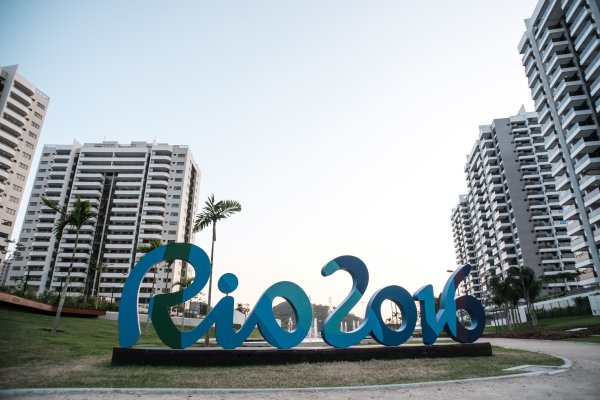 Olympians, Fans On Edge After Lochte Armed Robbery
Next Up: Editor's Pick