“Hillary Clinton wants to be America’s Angela Merkel, and you know what a disaster this massive immigration has been to Germany and the people of Germany. Crime has risen to levels that no one thought would they would ever see,” Trump said, during a foreign policy address in Youngstown, Ohio. “We have enough problems in our country, we don’t need another one.”

Left unsaid was Trump’s own past admiration for the German leader. Nearly a year ago to the day, on August 18, 2015, Trump gave an interview with TIME in which he said, unprompted, that Merkel was “probably the greatest leader in the world today.”

At the time, Trump was criticizing U.S. leaders for paying to support Ukraine’s government against Russian-backed separatists, while those in the region did little to help. “Germany’s like sitting back silent collecting money and making a fortune with probably the greatest leader in the world today, Merkel,” Trump told TIME in 2015. “She’s fantastic,” he added. “Highly respected.”

Germany was already experiencing a massive influx of refugees in the summer of 2015. On August 20, 2015, the German government announced that the number of refugees would grow to 800,000 for the year. Within weeks, the refugee issue had changed Trump’s opinion of Merkel.

“Frankly, look, Europe’s going to have to handle it. But they’re going to have riots in Germany. What’s happening in Germany, I always thought Merkel was, like, this great leader,” Trump said on Face the Nation on CBS on Oct. 11. “What she’s done in Germany is insane. It’s insane.”

In December of 2015, Merkel was named TIME’s 2015 Person of the Year, the fourth woman to be awarded the honor. Trump was listed as a runner up. He tweeted after the announcement that Merkel was “ruining Germany.” 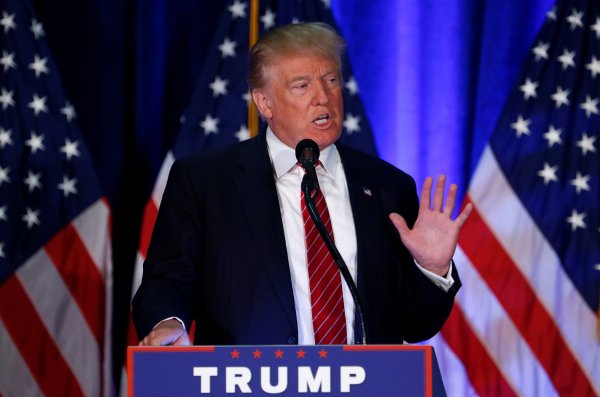