It was a rare show of weakness. On a forward somersault on the balance beam, the 2016 Olympic all-around champion Simone Biles put her hands down on the beam to steady herself. A few more balance checks followed, and she earned a 14.733–a strong score, but not enough to overtake Sanne Wevers of the Netherlands, who won gold. It was Biles’ lowest score on the event throughout the week’s competition in Rio, but still enough for bronze.

“I don’t know what happened on beam; I was just so annoyed,” Biles said after. “But I’m still very proud of [my routine].”

Biles’ teammate Laurie Hernandez, however, bested her score of 15.233 during the team event earlier in Rio with a 15.333 on Monday. It was enough to earn the New Jersey resident and first-time Olympian the silver and her first individual medal at the Olympics. “A year ago I never would have thought I would win a beam medal at the Olympics,” Hernandez said. “Any medal of any color at the Olympics is amazing. So silver is incredible.”

With their teammates Gabby Douglas, Aly Raisman and Madison Kocian, along with the men’s gymnastics team watching just a few feet away, Biles and Hernandez brought the women’s gymnastics medal tally in Rio to five.

As Hernandez noted, a medal of any kind at the Olympics is hard to come by. But third place counts as a disappointment for Biles, who has been untouchable on her way to three golds in her previous three competitions in Rio. U.S. National Team Coordinator Martha Karolyi acknowledged as much Monday. “Simone is also a human being just like all of us,” Karoly said. “We try to say she is a super human but I think she probably a little bit let the pressure get to her. Probably there was a tiny bit of mental tiredness in one moment. Beam is one of those events your total focus is required when you have to do tumbling skills on a four inch wide surface. There is absolutely not room for any kind of little mistake. But she fought and didn’t fall. Even with a pretty big mistake, being able to win a bronze medal, just proves again that she is a high class gymnast.”

The Brazilian men also continued their medal haul Monday, picking up a silver in rings for Arthur Zanetti, who earned gold in that event in 2012. This time around Eleftherios Petrounias of Greece won gold and Denis Ablyazin of Russia took bronze. In vault, Ri Se-gwang won gold for North Korea, followed by Russia’s Ablyazin and Kenzō Shirai of Japan in third. 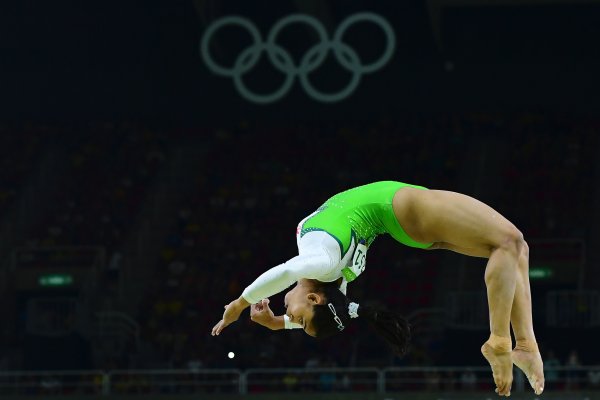 The Indian Gymnast Who Lost Out on a Medal, Won Hearts
Next Up: Editor's Pick