Vice President Joe Biden called Donald Trump clueless on foreign policy and a fanboy of dictators, telling an audience in an appearance on Monday with Hillary Clinton that Trump “would have loved Stalin.”

“He likes autocrats, he wills the politics of fear and intolerance, calling for a ban of Muslims in the United States, slandering proud Muslim parents of a Gold Star family,” Biden said to a crowd of more than 3,000. “Look, Trump’s ideas are not only profoundly wrong, they’re very dangerous and they’re very un-American.”

“He would have loved Stalin,” Biden said twice.

Biden’s remarks directed against Trump were part of a one-hour-long joint appearance with Clinton in Scranton, Pa., where both have family roots and are seeking to win working-class voters in a swing state.

The Clinton campaign had planned the event to focus on the economy, and the two assailed Trump’s plans and touted the Democratic nominee’s own agenda.

But they had sharpest words for Trump’s foreign policy pronouncements, attacking his suggestion that he would not come to the aid of NATO allies, his proposal to allow countries like Saudi Arabia and Japan to obtain nuclear weapons, his belief that torture should be allowed and suspected terrorists’ families should be targeted and what Biden called a “profound misunderstanding” of foreign affairs. Trump has praised autocratic leaders like Russian President Vladimir Putin and said Saddam Hussein was good at “killing terrorists.”

“Hillary has forgotten more about American foreign policy than Trump and his entire — I’m not joking here — and his entire team will ever understand,” Biden said.

Trump has blamed Obama for much of the turmoil in the Middle East and the rise of ISIS, saying the President “founded” the terrorist organization. He has promised a tougher stance with America’s adversaries and an end to the chaos that has spread out of Iraq and Syria.

Clinton, for her part, mocked Trump’s campaign speeches. “He says he knows more than the generals do,” Clinton said. “No, Donald, you don’t.”

“There is no doubt that Donald Trump is temperamentally unfit and totally unqualified to be President of the United States and Commander in Chief,” Clinton continued.

Clinton and Biden served together for four years in the Obama White House and often disagreed about foreign policy. As Secretary of State, Clinton was eager to arm Syrian rebels and advocated for the killing of Osama bin Laden in 2010; Biden was a more dovish adviser.

Biden flirted last year with his own run for President, a decision that would have scrambled the race and could have imperiled Clinton’s campaign. He ultimately decided not to run amid pressure from President Obama and other top Democrats.

Despite past differences, however, Biden will be a valuable surrogate for Clinton, particularly in Rust Belt states like Pennsylvania and Ohio.

Clinton and Biden took the stage holding hands, and Clinton was waiting on the tarmac with a warm embrace when the Vice President arrived in Pennsylvania. Biden’s working-class background and ease behind the podium made him an important conduit between President Obama, the first black President, and white voters in the Midwest and beyond.

Biden’s vows of sincerity — “I sincerely mean this” and “from the bottom of my heart” — are the dressings on his folkish appeal. The people of Scranton, Biden said, “deserve someone who’s made of the same stuff,” referring to Clinton.

Scranton has been the site of a long economic decline, following a familiar pattern for Rust Belt towns as steel and coal jobs moved west and overseas. The town’s boom years in the early 20th century gave way to diminished population and industry.

Clinton and Biden both have Scranton roots. Biden was born in Scranton and spent his early years there before moving to Delaware.

Clinton’s father was born in the city, and the family spent summer vacations at a cottage nearby at Lake Winola. Clinton famously recalled during her 2008 campaign that she learned how to shoot a gun as a little girl at the cabin; her grandfather worked in a lace mill in town.

“I always remember that I am the granddaughter of a factory worker and the daughter of small-business owner, and I am so proud of it,” Clinton said.

Polls in Pennsylvania show Clinton with a significant lead, edging Trump by a double-digit margin of 48-37 in a recent NBC/Wall Street Journal poll.

The Clinton-Biden rally was delayed more than a month after the deadly police shootings in Dallas.

For months Clinton has targeted Trump’s economic plan, but polls show his reputation as an adept businessman has been difficult to shake. In early June, 53% of voters trusted Trump to better handle the economy vs. 43% for Clinton, according to a Gallup poll. Only in recent weeks has Clinton been able to make up that difference by unrelentingly focusing on Trump’s bankruptcies and outsourcing jobs.

Clinton assailed Trump’s tax plan, which she said included a “Trump loophole” for the wealthy, including his family, and repeated her economic plan, including debt-free college, $275 billion in infrastructure spending, corporate profit-sharing for employees and affordable child care services.

With the Vice President sitting next to her, Clinton said Obama and Biden “don’t get the credit they deserve” in the aftermath of the financial crisis, but acknowledged the worries that many local families face seven years into the Obama Administration.

“Inequality is too high. Wages are too low, it is still too hard for too many to get ahead,” Clinton said. “We have a lot of work to do.” 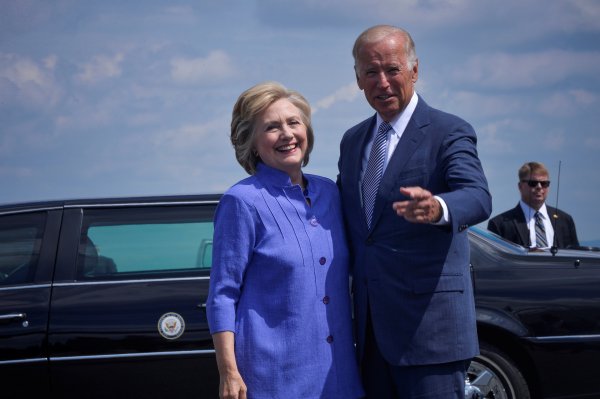 Biden Blasts Trump on the Stump for Clinton
Next Up: Editor's Pick