During the Olympic Games, I get a lot of questions about what it takes to medal and set a world record. When someone like Katie Ledecky breaks records by wide margins and dominates the competition, the inquiries come fast and furious.

There are five broad factors to think about when explain a record-setting athletic performance: physiology, technique, technology, sociology and psychology.

Physiology is a pretty simple concept to understand, but the various caveats are sometimes harder to grasp. For many sports, the physiological determinants of what it takes to “be in the game” and have a chance to be an elite athlete are well known. Some of these determinants, such as height, are not particularly trainable. Others such as maximum oxygen consumption, endurance, speed, balance, strength and sport-specific skills do respond to training and for some skills (think gymnastics) it helps to start young.

However, the kicker here is that people vary in just how trainable they are. The paradox is that almost anyone can improve dramatically at almost anything but training alone is not sufficient to make just anyone world class. On the other hand, people who are at the top are also frequently extremely committed to very demanding training programs. In many sports, training has not evolved much since the 1960s, but in swimming—a sport where records continue to fall—it is interesting to think about what hardcore strength training has done. A side-by-side look at Michael Phelps and Mark Spitz makes that point. Spitz was listed at 6’ and 161 pounds. Phelps is 6’4” and 194 lbs. Additionally, almost all good swimmers are now on the tall side.

Dan McLaughlin of “Dan Plan” fame is making a “10,000 hours” effort as an adult to become a PGA caliber golfer but instead seems stalled at very good with a handicap of about 5 or 6. If he had started at age five how good might he have become? On the other hand, Stefan Holm who is short for a high jumper at less than 6’ tall essentially trained and trained and became a gold medalist in the high jump, an event typically associated more with talent than training.

While people like Ledecky and Phelps would almost certainly have extremely high values for key physiological variables like maximum oxygen uptake, my guess is that they are unlikely to be the best ever. Likewise for those in the Olympic high jump finals and their high vertical jump numbers; the person with the highest vertical jump is not necessarily going to win the actual competition. But simply knowing what it takes to have a chance to be elite has led to the growth of so-called “talent ID” programs in sports like rowing, cycling and triathlon.

Technique has both athlete specific and general connotations. For example the emergence of the Fosbury Flop high jump technique (also independently developed in the 1960s in Canada by 13-year-old Debbie Brill), skate skiing, spin shot putting and much better turns in swimming have made big differences in performance. In this year’s Tour de France we saw some riders adopting extreme aero “super tuck” positions going downhill.

The ability, through training, of Edwin Moses to take on 13 strides between all 10 hurdles in the 400 intermediate hurdles was transformational and permitted him to dominate that event for more a decade and pile up a 122 race win streak. Likewise both Ledecky and Phelps are absolutely superior technical swimmers. The way they stay streamlined, turn and “hold” water are all textbook. This allows them, like Moses, to get the most distance out of the energy their muscles are using and thus “go faster.”

Technology can have an incredible effect on records. The most obvious example is the impact that pole technology has had on pole vault world records. The record set by Dutch Warmerdam with a bamboo in pole in 1942 was 4.77 meters (15’ 7¾”) compared to the current 6.16 meters (20’ 2 ½”). His record stood from 1942 to 1957 and was only surpassed when poles evolved to metal and then fiberglass. Other examples are hinged skates in speed skating, composition vs. dirt tracks for running, all sorts of improvements in pool technology and aero bikes. And, don’t forget golf clubs and tennis rackets. That tech suits were banned in swimming is an example of governing bodies taking a step back and regulating performance enhancing technology. Of course the dark side of technology is doping, and this can affect many world records.

Sociology, or social factors, has a huge impact on records. Two recent examples have been the emergence of East African runners in the 1960s, and women’s distance running. The East African runners highlight the globalization of sport. Women in distance running highlight the increasing inclusion of women in almost all sports. Data from Dr. Hirofumi Tanaka’s lab at the University of Texas shows that since 1980 the age at peak performance in many events has increased for women and now equals that of men. More money in sports and more professionalization have led many athletes to compete for longer. Elite athletes no longer need to “retire” from competition in their 20s to support themselves anymore.

It is also interesting to think about what happens when two good athletes have kids. For example, both of marathoner Shalane Flanagan’s parents were excellent runners. With more women participating in high level sports will there be even more of this? The kids of such pairings are likely to have both biological ability and plenty of exposure to sports. We are also seeing more father daughter examples of elites like gold medalist and self-styled “Shot Diva” Michelle Carter.

All of this means that more people are training harder for longer and thus the pool of potential elite athletes is expanding, and this just increases the chance for an exceptional talent to train exceptionally hard and have an exceptional, record-setting day.

Psychology plays a huge role in record setting performances. Part of it is the drive needed to practice and improve on a daily basis and part of it is the competitive greatness we see on TV. The beautiful 100-meter freestyle leg by Phelps in the 4×100-meter freestyle relay in Rio can be seen as an example of his competitive greatness, but he actually crushed the competition with a technically perfect turn that he developed via practice, practice, practice. Phelps’ performance in Rio brings me to another point: the ability of record setters and gold medalists to “relax and win” in competition. The paradox of the greats is that they are able to put forth a maximum effort and stay relaxed and focused at the same time. Importantly, this too is trainable and legendary Yoda-like track coach Bud Winter was teaching relax and win before anyone ever heard of the zone, Jedi-Masters and mindfulness.

To sum it all up, when you see a world record or superior performance in any sport, some combination of physiology, technique, technology, sociology and psychology is at work. In addition to these factors, things like the weather, environmental conditions and facilities all have to be just right. For those of you who compete, these factors are also useful as you think about what you can do to get better. By analyzing each one and how they interact for you it is possible to come up with a plan that will permit you to get better. Some people need to train harder and smarter to maximize their physiology, others need to improve their technique or perhaps invest in better equipment, while others need to think about their social situation. However, all of us need to cultivate our ability to relax and win to do our best.

Michael Joyner, is an expert in human performance at the Mayo Clinic, these views are his own. You can follow him on twitter @DrMJoyner. 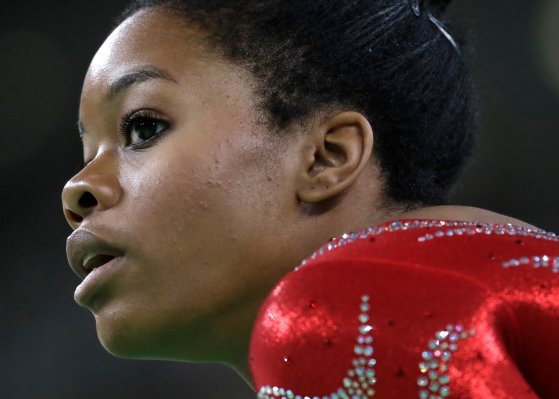 'She Got Trampled.' Gabby Douglas' Mom Slams Online Bullies
Next Up: Editor's Pick