A cowboy on a horse, looking towards the camera, circa 1890
Buyenlarge / Getty Images
By Richard A. Serrano / History News Network

From out of the Old West they came riding, nine cowboys on western-bred horses racing for two weeks across the rugged plains toward the World’s Fair in Chicago. America was on the move again, and in one last desperate dash the cowboys hoped to memorialize for all time how the scouts and pioneers and immigrant families, the rancher and the cowboy too, had tamed the rugged frontier.

The year was 1893. By that summer the western plains were largely settled, much of it farmed over and fenced in. The wild buffalo were no more, just a few scattered bones whitening in the prairie grasses. The Indian Wars were largely done, the Native Americans moved to reservations. Telegraph wires had been strung up, telephone lines stretched west. A new century – the American Century – loomed just around the corner, one with big inventions, high hopes and the kind of vast sweeping change that has always kept America reinventing itself.

Americans have never stood still. The Civil War split the country, and freed the slaves. The Great Depression laid it low; then brought new opportunities back. Two World Wars helped rebuild American might. The age of flight and technology was replaced by computers and science; a time of peace has been pushed aside by an age of terror. Each generation and every era has given way to the next.

The country was moving on again that June of 1893 too, and the Old West was dying out.

The race itself began as a lark, a trick to sell tiny, struggling Chadron, Nebraska, to the rest of the country. When the World’s Fair, committed to promoting America’s future, refused to include entertainment idol Buffalo Bill Cody and his Wild West Show, the cowboys decided to race toward Cody’s showground, which he had defiantly planted right next door to the fair itself.

It was the brainchild of a crafty western newspaperman. John Maher was one of the first to report from the scene of the horrific Wounded Knee massacre, which largely ended the “Indian problem.” But he was more notoriously known for making up hoaxes and writing them in dispatches to the big Eastern papers hungry for wild Western news.

The race committee was helped run by a town stalwart named “Billy the Bear” Iaeger. He had survived a horrible four-day Wyoming blizzard outside of Rock Creek that cost him both legs and most of his fingers. But he endured; he persevered. He went on to remake himself as a Chadron city leader and horse race promoter, and he won the heart of the prettiest young lady in town.

Initially hundreds of hard-bitten cowboys raised their hands or rode into town, eager to throw in with what now was billed as the Great Cowboy Race. They came off the slopes of the Colorado Rockies, the Nebraska pastureland, the Bighorn Basin and the Wyoming wilds, many known far and wide with names like “Texas Ben,” the “Cowboy Giant,” and even “Yeast Powder Bill.” One was an old western outlaw and horse rustler, a murdering desperado named “Doc” Middleton. He was the local Chadron town favorite, and women chased after him to pluck a hair from his horse’s tail or a sneak a peek into his deep-set dark eyes. Another was a young lad from the Kansas plains who donned a crown of snake tails sewn into his hat, and called himself “Rattlesnake Pete.” A third was big Joe Gillespie, the oldest of the bunch, a man so rough and tumble that he hunted coyotes not with his rifle or a pistol but his riding quirt, and often stomped on their panting chests if, as he said, “I think they have need of additional treatment.”

The route spanned a thousand miles, or so they reckoned. It would cover large swaths of the middle of the country and bridge its two mighty rivers – the Missouri and the Mississippi. The cowboys would roar over the Nebraska Sand Hills, gallop through the Iowa corn and Illinois wheat fields and, losing steam as they neared the big new skyscrapers of Chicago, stagger toward the brick streets, high domes and cool breezes off Lake Michigan.

And the law would chase after them.

The notion angered and alarmed animal rights advocates from Illinois to Massachusetts. They immediately set out to try and stop the race. Foolish, they called it. Animal cruelty, they complained. The horses would be pushed too hard. Two governors agreed and warned that it should be stopped. Wanted posters were nailed onto wooden street poles and tree trunks along the race route. Local sheriffs went on the lookout for overridden horses and ornery cowboy riders. Arrests were threatened, and jail doors swung open.

And still the cowboys rode. To win a new leather saddle, a golden Colt revolver, and a lucrative cash purse, they raced day and night from the new Chadron settlement near the purple Badlands to the glittering Chicago lakefront. Riding with them, pushing them on, was the realization that in their own old age, when the country will have changed and changed again, these grizzled cowboys could tell young boys gawking at Model T Fords and the Spirit of St. Louis flyer that for one hot, humid, glorious summer they had experienced the thrill of a lifetime mounted atop a breathing, thundering, muscle-pounding American horse that carried them into cowboy immortality.

It was indeed for one brief summer an unforgettable image. In the small towns of America’s heartland boys shouted from perches atop trees and blacksmiths pounded their anvils, all to announce the arrival of the cowboys. Crowds filled the board sidewalks and town squares and hurrahed them on. In the pages of the country’s newspapers too, the Old West crackled alive again. Like it had done before, and would again, American endurance prevailed.

Richard A. Serrano is the author of American Endurance; Buffalo Bill, the Great Cowboy Race of 1893, and the Vanishing Wild West (Smithsonian Books). 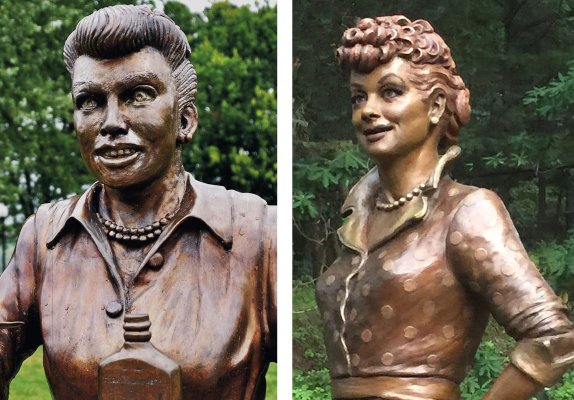 That 'Scary' Lucille Ball Statue Has Finally Been Replaced
Next Up: Editor's Pick