Now You Know: Why Do We Have Middle Names?

It’s right there any time you buy a plane ticket, register a new address, renew a piece of identification: the box that asks for your middle name or initial.

These days, in the United States, the assumption that people will have a middle name is fairly common. But early U.S. Presidents were two-named until John Quincy Adams. Even for decades after, presidential middle names were intermittent.

When did that change and why?

Students of Latin may remember some Romans having three names, but Karen Stern, a historian at Brooklyn College of the City University of New York, says their naming system was not quite the same as today’s use of a “middle name.” They used a praenomen or personal name; a nomen, or family name, which “has the same placement as a middle name but has a different function”; and a cognomen, which, she says, was a nickname indicating an attribute or, eventually, what branch of a family you were from.

But, while Rome was an empire for hundreds of years, Stern says, the three-part name wasn’t used for everyone in Roman society or for that whole period of time. Women tended to have two names, and slaves often just had one. On the other hand, some aristocratic families used multiple cognomina to indicate their lineage; one inscription indicates that Q. Pompeius Senecio Sosius Priscus, ordinary consul in 169, had 38 names.

At some point the custom of long names faded, lost for centuries. According to Stephen Wilson’s The Means of Naming: A Social History, “the custom probably began in Italy” of bringing back the middle name, and could be found there least as early as the late 13th century. In Italy, as would happen elsewhere, the practice first became common among the elites—among whom it was common by the late 1400s—and then spread to other social classes. The following century it spread to the countryside and took another hundred years to spread to some of the more isolated, backwater locations. The majority of these early middle names in Italy were those of saints, with the idea what that those saints would protect the children who bore their names.

Eventually, the use of middle names spread throughout Spain and France, the idea often carrying with it the class and religious dimensions it had gained in Italy. The first decade of the 19th century saw more than half of boys born in France with just one first name, 37% with two and 8% with three (meaning one first name and two middle names). By the last decade of that century, just under a third had one first name while 46% of boys had one middle name and 23% had two.

England’s upper classes began using middle names somewhat later. In 1605 William Camden, a British historian, wrote that “Two Christian names are rare in England.” That held true until the 19th century, though only about 10% of the British population had a middle name in 1800, writes Wilson (versus 40% in France).

The timing is mirrored in early modern Scotland, says Alice Crook, a PhD student at the University of Glasgow who analyzed Presbyterian records from 62,456 children born in Scotland between 1680 and 1839. She found middle names rare until about 1780 when their popularity began to rise dramatically—almost 99% of children in her sample who had middle names were born after 1780.

In general, then, in Europe, middle names became increasingly popular in the 19th century among all classes. The early United States picked up the same timing and meaning that was seen among the nations from which its colonists hailed. But why?

That one’s easy: a name has a lot of work to do, so there’s a clear benefit to spreading that work around.

Middle names provide an opportunity for people to shift identities throughout their life: the author George Sand wrote that her mother, who had “three baptismal names,” used each of them at various points throughout her life. Pablo Picasso was baptized with a string of more than a dozen names and though, like many people with multiple names, he wasn’t known by all of them, he did test out different combinations: initially signing paintings as P. Ruiz, then trying P. Ruiz Picasso before sticking with Picasso.

Names are generally important representations of social allegiance and godparent relationships, says George Redmonds, who has written numerous books on names, including Christian Names in Local and Family History. He suggests that perhaps adding more given names could be seen as a way of “piling up relationships.”

Crook says that in the names she studied “family is the most important thing that gets referenced” in middle names, “so it makes sense for the upper classes for it to be about lineage, for it to be about inheritance.” Middle names, if not family names, might also come from other important people within the community. One tradition which appeared regionally was for the first child a new clergyman baptized to take his name, she says, “so Katherine Imray McLeod was the first child baptized by John Imray.”

Articles from the early 1900s sometimes note the growing frequency of hyphenated names, or a woman keeping her maiden name as a middle name. By the mid-1930s H.L. Mencken writes that it was “common” for a woman to do so in the U.S.

Today, as Wilson notes, middle names serve much the same purposes they always have: they’re a way to keep family names going and thus preserve relationships; they’re a way to try something new or “put old names out to grass” without cutting the cord entirely.

But maybe not for long: in recent years, as the New York Times explained in 2014, even people who have middle names are starting to use them less. 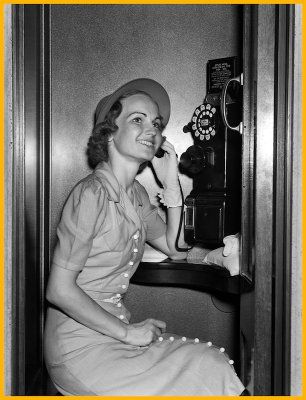 Now You Know: Where was the First Public Telephone Booth?
Next Up: Editor's Pick