On a pleasant Sunday night in Rio’s Olympic Stadium, Bolt, the fastest human in history, became the first to ever win the 100-m sprint in three straight Games, finishing with a time of 9.81. Justin Gatlin of the U.S., the 2004 Olympic champion, took an early lead but fell just short of completing his late-career comeback with another Olympic gold, taking silver with a time of 9.89. Canada’s Andre de Grasse won bronze in 9.91.

Even though he’s run the fastest 100 m in history — 9.58 seconds, at the 2009 world championships — Bolt insists this is his weakest event. He has a funny way of showing it. “This is what I came here for,” Bolt said after the race. “This is the first step in the right direction. I’m happy and I’m proud of myself. It wasn’t perfect execution, but I got it done.”

Earlier in the night, in the men’s 400-m final, a 20-year-old world record held by U.S. great Michael Johnson fell: South African Wayde van Niekerk won gold with a time of 43.03, .15 seconds faster than Johnson’s 1996 mark. “I thought someone was going to catch me,” says van Niekerk, “because I felt really alone at the end there. And I was like, ‘What’s going on, what’s going on?’ And it kind of gave me so much motivation to keep on pushing, keep on pushing. And as I got to the finish line, I just dove. And right after that I said, ‘Don’t sit, don’t sit.’”

The 100 m, known as the fastest 10 seconds in sports, was relatively slow by Bolt’s lofty standards. In 2012, the American Tyson Gay ran 9.80 and only managed to finish fourth. Bolt blamed the times on the quicker than usual turnaround, less than 90 minutes, between the semifinals and finals. “It was really stupid,” Bolt said. “I don’t know who decided that. It was really stupid.”

Whatever the pace, Bolt luxuriated in his victory. Fans screamed for him before the race. During his warmup, while his opponents were lingering at the starting line, Bolt jogged out about 30 meters down the track, turned around and held his arms up, soaking in the adulation as if he were royalty. He shimmied for the cameras, pointed, tried his best to be a showman. The act works.

Gatlin, meanwhile, was met with a chorus of boos. A decade ago, he received a four-year suspension for using performance-enhancing drugs. His past was thrust back into the spotlight last week after American swimmer Lilly King said Gatlin, and other convicted dopers, did not deserve a spot at the Olympics.

The boos for Gatlin shocked Bolt. “It was surprising,” Bolt said. “I’ve never seen it happen before.”

Though his flustered face at the start told another story, Gatlin insists the boos didn’t bother him. “When I looked up in the stands, I saw so many American flags, way more than I’ve ever seen at any championships,” Gatlin said. “At the end of the day, you hear everything. But for me, you have to tune that kind of stuff out. I just ask people, they come out here, they get enthralled in the excitement, there are a lot of Usain Bolt fans, a lot of Jamaica fans. But, they don’t know me, they don’t know Justin.”

When the starting gun blasted, Bolt knew he was off his game. “I kind of felt dead at the start,” he said. Gatlin took an early lead, but Bolt never panicked and passed him shortly after the halfway mark. The win in hand, Bolt pounded his chest before the finish. He grabbed a stuffed Olympic mascot afterward and paraded it around the stadium, mugging for selfies with adoring fans. As is his tradition, he hammed it up on the track with his “lightning bolt” poses.

The Jamaican runner shot onto the world stage in Beijing, where he broke a world record while celebrating before the finish, crushed all challengers in London, and gave the world a Phelpsian-thrill in his final Olympic 100. These Rio Games will be remembered for their surreal athletic achievements: Simone Biles in gymnastics, Katie Ledecky in swimming, and two of the greatest Olympians of all time — Phelps and Bolt — going out on the highest of notes.

Was the world’s greatest sprinter ever really vulnerable coming into Rio? The race was billed as a heavyweight bout between Bolt and Gatlin. The American lost to Bolt by the smallest of margins, .01 seconds, at the 2015 World Championships in Beijing. Gatlin stumbled at the end of that race. Coming into the Olympic final, Gatlin had run the fastest time in the world this year. Meanwhile, a hamstring injury slowed Bolt’s Rio training and caused him to pull out of Jamaica’s Olympic trials. Canada’s de Grasse, the bronze medalist, wondered if all the chatter about Bolt’s health was just a ruse. “I think he fools a couple of people with these injuries,” said de Grasse.

Bolt has always performed best on the biggest stages. And none are bigger than the Olympics, where he’s now won seven straight golds, in seven races, over three Games. He’ll shoot to go an incredible nine-for-nine later in the week, with the 200-m final Thursday night, and the 4 X 100 relay on Friday. “I really want the 200-m world record,” says Bolt, who set the mark, 19.19 seconds, at that same 2009 world championship meet. “If I can get a good night’s rest after the semifinals, it’s possible that I could. I’m going to go out there and leave it all on the track.” 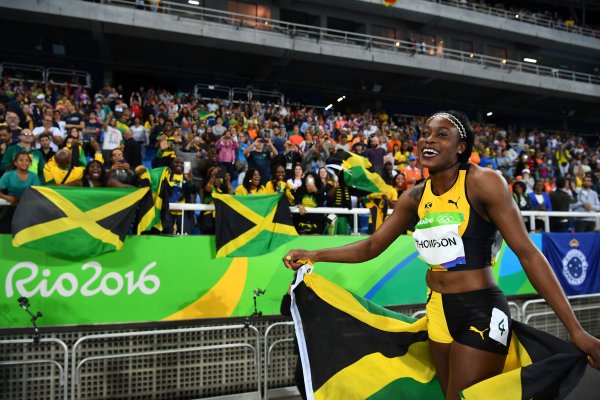 Jamaica Strikes First in Race for World's Fastest Woman at Rio
Next Up: Editor's Pick