The crowd was much thinner in the Rio Olympic Arena, but that didn’t matter for U.S. gymnast Simone Biles. After clinching gold in the team and the all-around events, she added to her gilded collection with a score of 15.966 on vault. That was enough to make Biles the first U.S. female gymnast to ever win gold in the event.

It’s also one of the few milestones Biles has yet to reach; she has never won vault at her past three world championships.

“There is a lot of satisfaction I have in winning gold on the vault finally,” she said. “I’m just super proud because I was able to upgrade my second vault, which was exactly what I needed to do so I was very excited.”

Teammates Gabby Douglas and Madison Kocian competed on uneven bars. Douglas went first, just missing a perfect 180 on a handstand and taking a jump on her landing to earn 15.066. Kocian, from the same Texas gym where 2008 all-around champion Nastia Liukin trained, qualified with the top score and and flew high but not quite high enough. Her score of 15.833 wasn’t enough to best Russia’s Aliya Mustafina, who earned 15.900. Kocian settled for silver and Germany’s Sophie Scheder took bronze. Douglas finished seventh, the second time she failed to medal in the uneven bars final at the Olympics. It was the final event of the Olympics for both Douglas and Kocian. Biles will compete in the beam and floor events this week.

Alex Naddour earned the U.S. its other medal of the night, a bronze on pommel horse. It was a long time coming, not just for Naddour, who was an alternate in 2012 and didn’t compete in London, but for the U.S. men, who haven’t won a medal on horse in 32 years.

On the floor exercise, things also didn’t go as well for the men’s all-around champion, Japan’s Kohei Uchimura, who stepped out of bounds on his first tumbling run. His teammate, world champion Kenzo Shirai, also had problems, stumbling on the landings of all of this tumbling runs. They wound up finishing a disappointing sixth and fourth, respectively.

Their misfortune was a boon to the home team. Brazilians Diego Hypolito and Arthur Mariano earned silver and bronze behind gold medalist Max Whitlock, of Britain. They become only the second and third Brazilians to earn gymnastics medals, after Arthur Zanetti won gold in rings in 2012. 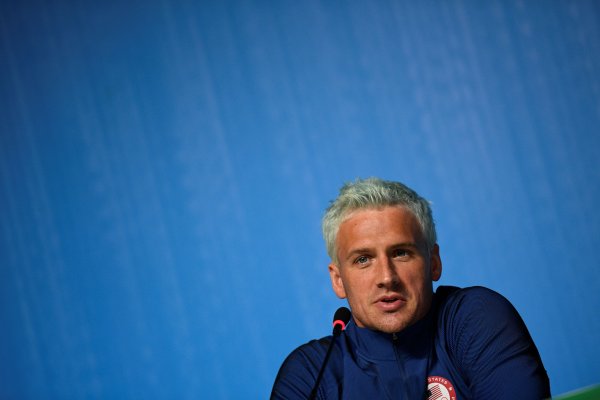 Ryan Lochte and 3 Other U.S. Swimmers Robbed in Rio
Next Up: Editor's Pick