Ryan Lochte and 3 Other U.S. Swimmers Robbed in Rio: Officials

Ryan Lochte and three other U.S. swimmers were robbed by people posing as armed police officers at the Rio Olympics.

The U.S. Olympics Committee spokesman Patrick Sandusky said in a statement that Lochte and teammates Gunnar Bentz, Jack Conger and Jimmy Feigen were leaving the French Olympic team’s hospitality house in a taxi going to the athletes village early Sunday, hours after the last night of Olympic swimming.

The taxi was “stopped by individuals posing as armed police officers who demanded the athletes’ money and other personal belongings,” Sandusky said. He told the Associated Press that the robbers took cash and credit cards only, and that no Olympic medals were stolen.

The four swimmers are “safe and cooperating with the authorities,” Sandusky said.

In an interview with NBC News, Lochte said he and the other swimmers were robbed at gunpoint.

Lochte continued saying, “And then the guy pulled out his gun, he cocked it, put it to my forehead and he said, ‘Get down,’ and I put my hands up, I was like ‘whatever.’ He took our money, he took my wallet — he left my cell phone, he left my credentials.” 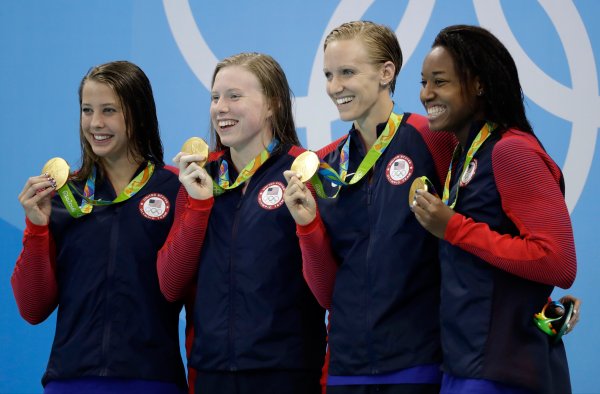