Monica Puig of Puerto Rico, the 34th-ranked tennis player in the world, stunned world no. 2 Angelique Kerber of Germany in the Olympic gold medal match in Rio on Saturday, pulling out a history-making win in three tough sets, 6-4, 4-6, 6-1.

As soon as she won the final point, Puig dropped her racket and mouthed the words, “Oh my God.”

By making her surprising run to the finals in Rio, Puig was assured of becoming the first woman to win an Olympic medal representing Puerto Rico. Now, she’s the first person ever to win gold for the island.

The win comes at a moment when Puerto Rico could use a morale boost. The U.S. territory is facing a crippling $70 billion debt crisis and struggling to provide basis services like health care and schooling. Migration to the U.S. has withered Puerto Rico’s tax base, leaving the island with a 45% poverty rate. After many months of political infighting, President Obama signed bipartisan legislation in late June that creates a financial control board to help restructure Puerto Rico’s debt.

On top of these structural issues, Puerto Rico is also suffering from a Zika outbreak. On Friday, the Obama administration declared a public health emergency on the island. The virus has infected at least 10,690 people, including 1,035 pregnant women.

Puig’s well aware of Puerto Rico’s problems––and what her win could mean, however temporary its effect. “I’m doing it more for my country,” she said after her semifinal win over two-time Wimbledon champion Petra Kvitova, according to USA Today. “This Olympics isn’t about me it’s about Puerto Rico and I know how bad they want this. This isn’t for me this is for them.”

Like other U.S. territories such as Guam, the U.S. Virgin Islands and American Samoa, Puerto Rico competes as an independent entity at the Olympics. The territory has sent a delegation to every Games since 1948. Prior to Puig’s win, Puerto Rico’s most high-profile Olympic victory belonged to the men’s basketball team, which crushed a U.S. men’s hoops team filled with NBA stars, 92-73, at the 2004 Olympic opener in Athens. As sweet as that win was, however, Puerto Rico didn’t even reach the medal round.

With her gold for Puerto Rico, Puig stands alone. She’s a crucial Olympic champion, at a time when victories are in short supply in her native home. 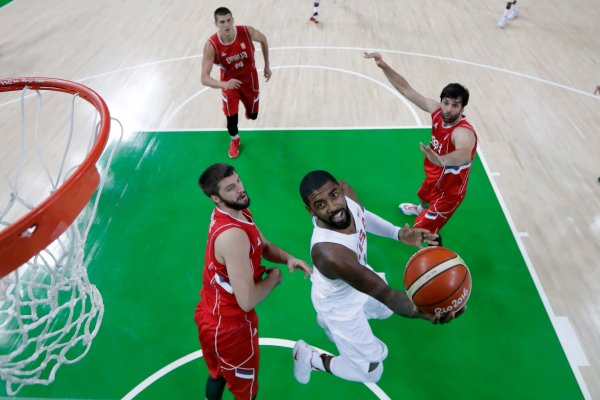 Something Is Wrong With the U.S. Men's Basketball Team
Next Up: Editor's Pick