Rio Official on the Green Pools: ‘Chemistry Is Not an Exact Science'

As the water polo and diving pools at the Olympics remain a murky shade of green, Rio officials said they’re not clear on how the “proliferation of algea” was able to grow, according to the Associated Press.

“We first learned that chemistry is not an exact science,” Rio 2016 spokesman Mario Andrada told the AP Friday.

The pools at the Olympics are thought to have changed colors due to algae growth that officials said was caused by heat and a lack of wind. Other experts say chemical imbalances are what can cause algae to grow in pools. The pools started to change early last week, and according to the AP, underwater cameras have captured “amoebae-like shapes” in the water.

As the AP reports, some scientists argue that preventing algae and green pools is a pretty simple science. “The basic principles of maintaining disinfectant, proper pH, and circulation and filtration are scientifically sound and well established,” said Tom Lachocki, executive director of the National Swimming Pool Foundation in Colorado Springs.

Officials are reportedly using chlorine to get the pools back to their normal shade. 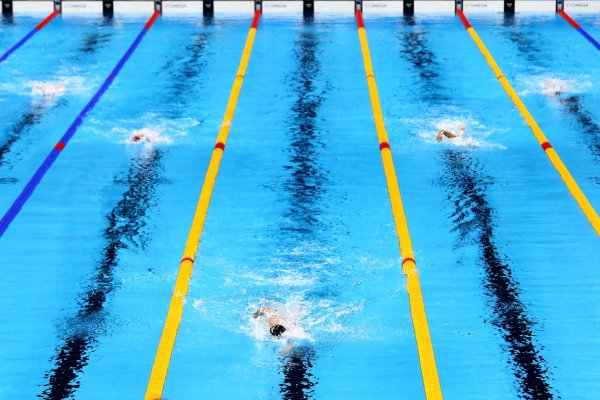 This One Photo Shows How Katie Ledecky Totally Dominated Her Olympic Competitors
Next Up: Editor's Pick