Something Is Wrong With the U.S. Men's Basketball Team

Kyrie Irving of United States goes to the basket against Stefan Markovic of Serbia at the Rio 2016 Olympic Games at Carioca Arena 1 on August 12, 2016 in Rio de Janeiro, Brazil.
Pool—Getty Images
By Sean Gregory/Rio de Janeiro

Yes, this was really happening. Serbia’s Bogdan Bogdanovic found himself wide open on the left wing in the last second of Friday night’s Olympic men’s basketball preliminary game against the United States. The U.S. held a 94-91 lead. If Bogdanovic sank this shot, the game was going to overtime. Since the U.S. finished with an embarrassing bronze medal at the 2004 Athens Games, no team has come closer to beating them at the Olympics.

Bogdanovic missed, but the message was clear: Team USA is not playing like the gold medal-favorite, NBA All-Star-packed team that they are. Two days before, the U.S. trailed Australia for much of the game before pulling away late. Sure, this year’s team is missing many of America’s best players, most notably LeBron James and Stephen Curry. But it’s still packed with stars like Carmelo Anthony, Kevin Durant and Kyrie Irving. Serbia has only one active NBA player on their team. Serbia, meanwhile, has only one active NBA player (Nikola Jokic, an up and comer with the Denver Nuggets who finished with 25 points and six rebounds against the U.S.). What is going on?

To hear some members of Team USA tell it after the close call against Serbia, the problem is defense. “Defensively,” says forward Paul George, of the Indiana Pacers, “is where we have to man up.”

Serbia coach Sasha Djordjevic says he borrows his offensive philosophy from the San Antonio Spurs, who’ve won five NBA titles since 1999. The ball is always moving, causing the defense to give chase. This strategy is particularly effective against a more athletic opponents. Bigger, faster players can easily stop inferior ones if they’re just going to the basket against them one-on-one: their physicality gives them an overwhelming advantage. But when these superior players are caught moving around on defense, the offense can more easily counter-strike.

After the game, both U.S. coach Mike Krzyzewski and George gushed about Serbia’s ball movement. But should it have really caught the U.S. so off guard? They all play against the Spurs.

“In our game, there’s movement obviously,” says George. “With these guys, it’s constant movement. We talked about it in the back. You never sit still. In our game, there are moments when you sit still. You can have a rest period. You might get action that guys just run on one side. [Against Serbia], you’re constant moving from side to side. They don’t get tired.”

One of George’s teammates, however, faults the offense. Draymond Green of the Golden State Warriors, who was held scoreless in 13 minutes, blamed Team USA’s listless offense for its failure to put Serbia away. “I don’t think it’s ball movement,” says Green. “I think our offense is hurting our defense as well. When we were moving the basketball early on, everything was flowing, the defense was great. When we stop moving the basketball, everything is stagnant. It transferred over to the defensive end.”

Green’s hitting on something here. The U.S. needs to spend less time praising the way Serbia plays, and more time playing like Serbia.

After playing some more games together, Team USA will improve its teamwork. But are the Americans running out of wiggle room? The U.S. plays one more preliminary game Sunday against France, led by Tony Parker and Boris Diaw– uh oh, more Spurs. The quarterfinals begin Aug. 17.

This team was cobbled together quickly after many other stars dropped out. Only Anthony and Durant played in London. The team seems to realize their margin for error is getting smaller. “As good as we are, if we keep playing like this,” says George, “these games are going to keep getting tougher. 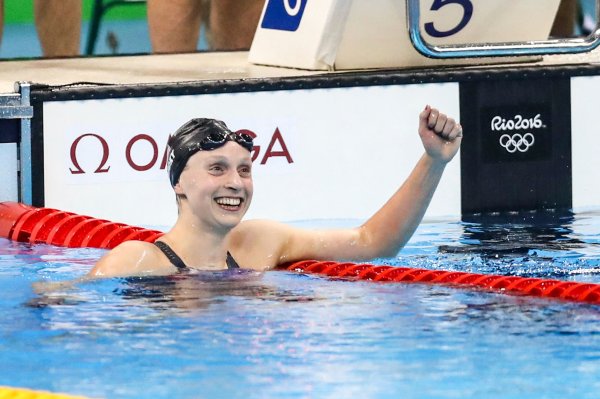 Ledecky Blows Away Field as Phelps Settles for Silver
Next Up: Editor's Pick