Samsung's Galaxy Note 7 Is a Worthy Challenger to the iPhone

Editor’s note: Since this review was originally published, Samsung has halted production of the Galaxy Note 7 amid reports of the device overheating and, in some cases, catching fire. In light of this, TIME has rescinded our recommendation of the Note 7. Below is our original review, written before the issues came to light.

After a quick tap, the tiny red light began to gleam. This signal indicated that the device was scanning my irises to make sure I was authorized for access. This isn’t an excerpt from a science fiction novel — it’s how I’ve been unlocking my phone over the past week.

An iris scanner is among the standout features on Samsung’s Galaxy Note 7, the latest device in the South Korean company’s series of large-screened, stylus-toting Android smartphones. The Note 7, which launches on August 19, is a modest but welcome improvement over its predecessor, offering a more ergonomic design, an enhanced stylus, the same camera as its Galaxy S7 cousin, and some software tweaks. It costs around $30 per month, or more than $800 without a payment plan, depending on the carrier.

The Note 7’s launch comes just weeks before Apple is expected to unveil its much-rumored iPhone 7 and iPhone 7 Plus, the latter of which is a direct competitor to Samsung’s Note lineup. Samsung and Apple are the top two smartphone vendors in the world, but their approaches are wildly different. The Note 7, in some ways, is everything the iPhone isn’t: it’s water-resistant, there’s a stylus, it can scan your eyeballs, it comes with three times as much storage by default with the ability to add more, and it charges wirelessly. But the phone’s software is also much more convoluted than that of the iPhone — unlike Apple’s smartphone, it comes with promotional apps from your carrier.

I’ve spent the past several days using the Galaxy Note 7 for all of my daily tasks instead of my usual iPhone. Here’s a closer look at what that’s been like.

Samsung’s smartphones have become nearly indistinguishable from one another since the Galaxy S6 was released in the spring of 2015. Like last year’s Note 5 (Samsung skipped the 6), the Note 7 is made of glass and metal, with its S Pen stylus neatly tucked away in a port at the bottom of the phone. This year’s model looks mostly similar to last year’s, albeit with a slimmer overall profile. This is a nice change, making it easier to hold in one hand. The phone is also water-resistant, dust-proof, and packs Samsung’s fast-charging technology.

The iris scanner is also helpful for instances when your finger is wet, which makes it difficult or impossible for the sensor to read your print. This is an issue I encounter with my iPhone’s fingerprint scanner fairly often. The Note 7’s iris scanner and fingerprint sensor can also be used to access files and apps stored in the phone’s Secure Folder, a separate hub for private content.

The Note 7’s 64GB of storage, along with its SD card slot, will satisfy those who store lots of photos and videos on their phone. The iPhone is available in 16GB, 64GB, and 128GB varieties, but it doesn’t have a port to add more storage. That means iPhone owners who want more storage space need a new phone, or they need to store more content in the cloud. This also means the starting price is more expensive than the entry level versions of the iPhone (16GB) and Galaxy S7 (32GB). The Note 7’s larger screen also makes it more expensive than the Galaxy S7.

Samsung’s new smartphone lasted more than a full day on a single charge, which is great for those who often find themselves searching for outlets. After nearly 24 hours, the phone still had about 40% battery remaining. Battery life will vary depending on what you use your phone for, how often you receive notifications, and whether or not features like Bluetooth and your phone’s mobile hotspot are turned on. I used the Note 7 for basic everyday needs like reading email, checking social media, playing casual games, streaming Netflix, and doing a little bit of work in Google Drive.

The Note 7 includes the same gorgeous 2,560×1,440 AMOLED screen as its predecessor, making it a great choice for those who often use their phone for watching movies. It also has the same 12-megapixel camera as the Galaxy S7, which captures rich, vibrant shots. When comparing the Note 7’s camera against that of the iPhone 6s Plus, I noticed the Samsung produced bolder, more vivid colors in some circumstances. The iPhone, meanwhile, captured colors more as they appeared in real life.

See for yourself in the images below. Notice how the sky and water in the photo taken on the Note 7 look bluer and brighter, while the water in the iPhone’s photo looks a bit more green.

With the Note 7, Samsung has made a clear effort to simplify its software. Yes, there’s still a widget advertising Samsung’s services and a handful of apps from my carrier (T-Mobile) that I’ll probably never use. And yes, the phone still comes with two separate apps for email and Web browsing and two app stores, since the Note 7 includes both Samsung and Google’s stock apps.

Even so, Samsung deserves credit for the subtle improvements it’s made to the Note 7’s software. The Settings menu, for instance, has been condensed and streamlined for easier navigation. Samsung’s note-taking apps have been combined into one app, Samsung Notes, to avoid confusion and clutter.

And some of the features Samsung adds to Android are actually helpful, especially when it comes to the Note and its S Pen stylus. Ejecting the S Pen from its holster launches a fan-like menu with a selection of stylus-optimized apps, like Samsung Notes, Screen Write (snap a screenshot and annotate it), Smart Select (capture a GIF of a video on screen using the stylus), and Translate (translate text in a foreign language). This feature makes the S Pen more useful — the stylus experience wouldn’t feel as effective without it.

That said, the Note 7’s interface still isn’t as simple as I’d like it to be. In terms of software, I prefer plain, stripped-down versions of Android, like those found on Google’s Nexus phones and the OnePlus 3. While I enjoy the capabilities Samsung has added for the S Pen, there are some add-ons I could live without, such as the Edge panel. This strip, which is accessible by swiping in from the right of the screen, includes shortcuts to your favorite apps, contacts, and tasks. But since Android users can pin widgets and apps to their home screen, the Edge panel is superfluous. It doesn’t make any tasks faster or more convenient for me, and I’ve accidentally launched it when trying to navigate between home screens.

The Note 7 has also adopted the Galaxy S7’s always-on display, meaning you can see information like the time, date, and your phone’s battery level even when the phone is idle. It’s handy to see this data without waking your phone, but sometimes I forgot that I need to press a button to fully activate the phone, since it feels like it’s already on. You can also pin notes written with the S Pen to the Note 7’s lock screen, which can be helpful for keeping reminders and to-do lists easily reachable. The headline features that Samsung introduced on previous Note devices, like the ability to view apps in split-screen view, are also present on the Note 7.

Samsung has long tried to make its smartphones stand out by giving them unconventional capabilities. With the Note 7, Samsung has maintained this willingness to experiment, while also learning from past criticisms. The Note 7’s gorgeous glass build, improved S Pen, reliable camera, long battery life and water resistance make it one of the best Android phones available. It’s not perfect; — the software could be cleaner and easier to use. But Samsung is making it increasingly difficult to remain a full-time Apple user. We’ll soon see what Cupertino has up its sleeves. 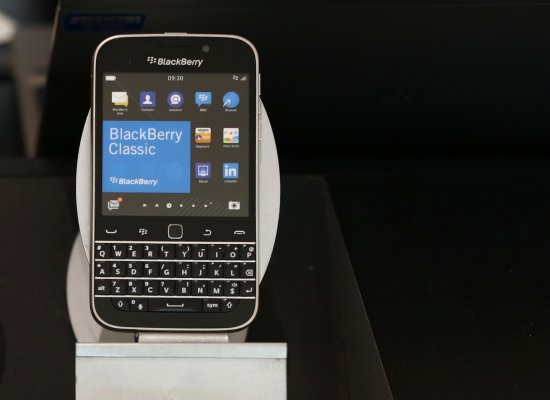 Dear Mr. Putin: Here's Why You Should Help Save My Beloved BlackBerry
Next Up: Editor's Pick