Carli Lloyd of United States reacts against Sweden in the second half during the Women's Football Quarterfinal match at Mane Garrincha Stadium on Day 7 of the Rio 2016 Olympic Games in Brasilia on Aug.12, 2016.
Celso Junior—Getty Images
By Grant Wahl / Sports Illustrated

BRASÍLIA, Brazil — The United States, the reigning Women’s World Cup champion and three-time defending Olympic gold medalist, was eliminated from the 2016 Olympics on Friday by Sweden in a tense penalty-kick shootout that Sweden won 4-3 in the fifth and final round following a 1-1 draw.

The U.S.’s Christen Press launched her spot kick, and the USA’s fifth, over the bar, and Lisa Dahlkvist converted hers to finish the monster upset. Swedish goalkeeper Hedvig Lindahl had saved Alex Morgan’s kick to open the shootout, while Hope Solo had done the same to Linda Sembrant on Sweden’s third try.

The U.S. dominated possession in the game but failed to create many good scoring chances, and Sweden went up 1-0 on a brilliantly executed counter finished by Stina Blackstenius in the 61st minute. But Morgan equalized for the U.S. in the 76th, running onto a ball that had bounced off the head of Jessica Samuelsson into her path.

The shocking finish sends the U.S. home in the quarterfinals, the earliest U.S. exit in women’s Olympic soccer history. The U.S. had had won four of the five Olympic gold medals and had never failed to reach the final.

Here are three thoughts on the game:

The Swedes had played poorly in this Olympic tournament, losing 5-1 against Brazil and looking mediocre against China and South Africa. But the Swedes always seem to raise their game against the U.S., and the same was true again here. They defended deep and tried to strike on the counter, which worked for the go-ahead goal, and then Sweden kept its cool when the U.S. regained momentum with the equalizer.

Sundhage’s squad simply had more composure than the U.S. in the penalty round, and it was somewhat surprising that the U.S. misses came from Morgan and Press, two forwards who usually are more precise with their shooting. (Press’s confidence has always been a concern, though.) Sundhage is a great coach, and in a tight game she made the better calls against her counterpart and former assistant Jill Ellis on Friday.

Not starting Crystal Dunn is a head-scratcher

If you know that your opponent is going to sit deep for the entire game, as everyone knew Sweden would do, then it makes little sense not to start Dunn instead of Allie Long. Dunn could play in the 3-person midfield with Carli Lloyd and Morgan Brian in those situations. Dunn did come on for Long in the 65th minute after Sweden had scored, and she made an instant impact, beating defenders on the dribble and creating problems for the Swedes.

Long makes more sense as a starter against teams that won’t sit deep, as would’ve been likely for the rest of the Olympics, but starting her against Sweden was an awfully conservative move.

The officiating crew was pretty horrible

Both the U.S. and Sweden had goals wrongly disallowed in extra time by New Zealand referee Anna-Marie Keighley and her sideline assistants. First, Lloyd had a header–reminiscent of her opening goal of the tournament against New Zealand–whistled off for an apparent offside call. Moments later on the other end, Lotta Schelin had a ball squeeze through the U.S. defense into her path from close range and she scored the would-be winner, only to be wrongly called for offside as well.

In a sense the bad calls offset each other, but you can’t have that happen in the decisive moments of a major tournament knockout game. 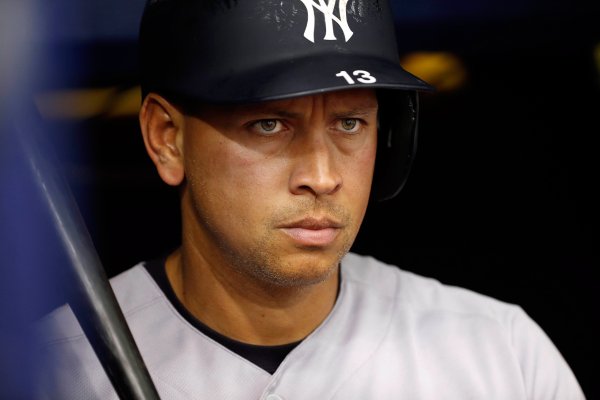 Alex Rodriguez Made More Money Than Almost Every Other Athlete. Almost
Next Up: Editor's Pick