Thailand Bombings: Here's What You Need to Know

By Casey Quackenbush and Helen Regan

Southern Thailand was hit by a wave of bombs and incendiary devices on Thursday and Friday, killing at least four people and wounding more than 20. Royal Thai Police Col. Krisana Patanacharoen told reporters it was “too early to conclude” who was behind the attacks. But he said the bombings followed “a similar pattern used in the southern parts of the country” — a reference to a low-level insurgency in the country’s Islamic south that has ground on for more than a decade and killed more than 5,000 people. Here’s what you need to know:

Where have the blasts occurred and what are the casualty figures?
On Thursday, a bomb exploded in a market in the southern province of Trang, killing one person and injuring six. One kilometer from the site, a fire broke out in a three story department store, injuring none but it’s estimated to have caused 100 million baht ($2.8 million) worth of damage, the Bangkok Post reports.

Later, on Thursday night, two bombs exploded 20 minutes apart in the resort city of Hua Hin, killing one Thai woman and injuring at least 20, including ten foreign nationals. Police say they recovered a Samsung cell phone that they believe was used to remotely detonate at least one of bombs. Among those injured are two Dutch men, a Dutch woman, and seven others ranging in age from 16 to 48.

Also on Friday morning, another two bombs exploded in Surat Thani outside police stations, killing one and injuring several others, according to local media. A fire also broke out around 3 a.m. local time at a shophouse, causing 10 million baht (around $280,000) worth of damage, says local media.

Two bombs also exploded in Phuket around 8 a.m. local time in front of a hotel and a police booth in the tourist area of Patong, injuring one person, reports local media.

About 200 kilometers north in Phang Nga province, two bombs went off in Khao Lak and another in Khuek Khak around 9 a.m. local time. Hours earlier, over 80 shops were gutted by a fire in the Takua Pa market frequented by tourists.

Fires also broke out at shopping venues in Krabi and Nakhon Si Thammarat on Friday, reports the Bangkok Post. There are no reports of injuries and it’s not clear if the fires and the bombings are linked.

What’s significant about these sites?
While Thailand is no stranger to bomb attacks, these have mostly been confined to southern areas as part of a Muslim and ethnic insurgency.

These explosions, however, have taken places in areas popular with foreigners.

The bombs in Hua Hin, a popular resort town in southern Thailand, were hidden in plant pots on a busy street, with many bars. Hua Hin, about 125 miles from the capital Bangkok, is also home to a royal summer palace of Thailand’s King Bhumibol Adulyadej.

While Surat Thani is not a tourist destination in itself, it is a transit point for tourists heading to the resort islands of Koh Samui and Koh Pha Ngan.

Who would want to carry out these bombings?
No one has claimed responsibility for the bombings. The blasts coincide with the birthday of Thai Queen Sirikit on Aug. 12 (the holiday also marks Mother’s Day in Thailand). They have also occurred near the first anniversary of the bomb attack on Bangkok’s Erawan Shrine, a major tourist attraction. That attack, on Aug. 17, 2015, killed 17 and injured over 100.

Since the military seized power in a coup in 2014, the country has been in political crisis. In a referendum last week, Thais voted in favor of a new constitution that could give the military greater powers. On Wednesday, junta leader Prayuth Chan-ocha gave a speech taking credit for bringing stability back to the country. According to the Associated Press, the attacks may have been timed in such a way to embarrass the military government.

Those who have agitated against the junta in the past have been the so-called Red Shirts — supporters of ousted Prime Minister Yingluck Shinawatra, sister of former Prime Minister Thaksin Shinawatra (who was ousted in another military coup in 2006). Thaksin’s ouster saw bloody street battles in the nation’s capital between his supporters, opponents, and the military. Members of the Red Shirts include the rural poor but also left-wing activists and students.

The southern province of Trang, where one person was killed and several injured, lies on the edge of the country’s Deep South, where Muslim separatists have been fighting for independence for generations. Since 2004, 5,000 people have died violently, mainly in Thailand’s three southernmost provinces.

A timeline of recent bomb attacks in Thailand can be found here. 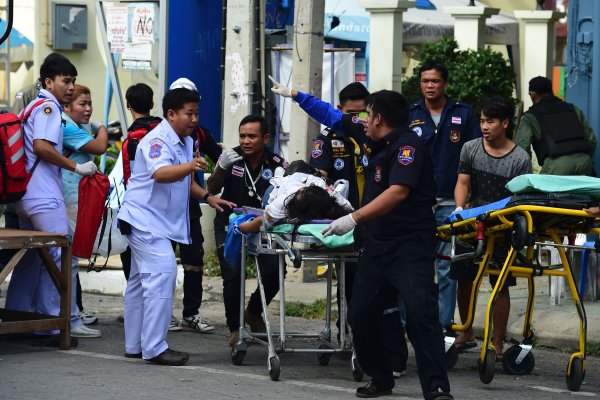 At Least Four Dead in Thailand Bombings
Next Up: Editor's Pick