A series of bombs in Thailand have killed at least four people and injured more than 20, including ten foreign nationals, in a suspected coordinated attack that Thai officials said was to bring “chaos” to the Southeast Asian nation.

Multiple bombs were detonated in five cities, all south of the capital Bangkok and popular with foreign tourists on Thursday night and Friday morning.

No one has claimed responsibility for the attacks but Thai authorities said they are not linked to Islamic terrorism. Thai police Col. Krisana Patanacharoen said it was too soon to say who was behind the bombings but “we are sure that it is not linked to terrorism,” the Associated Press reports.

A double explosion in the Southeast Asian nation’s resort town of Hua Hin on Thursday night local time killed one Thai woman and injured about 20 others, including ten foreign tourists Agence France-Presse reports. The two bombs, which went off 30 minutes apart, were hidden in potted plants on a busy street and were detonated from mobile phones, said the superintendent of police in Hua Hin, Sutthichai Srisopacharoenrat. The bombs hit a popular nightlife area full of bars and restaurants.

According to the Guardian, the names of the ten foreign nationals injured in the Thursday night blasts in Hua Hin have been released. Among those wounded are two Dutch men, a Dutch woman, and seven others ranging in age from 16 to 48. Thai media reports that the woman killed was a street food vendor.

“Of the 19 [wounded], three are in serious condition and seven of the injured are foreigners — four women and three men,” Sutthichai told the Bangkok Post.

On Friday morning Thai authorities confirmed that another person died in a two new blasts in Hua Hin, four people were injured, the Associated Press reports.

Separately, one person was killed and two injured in another double bomb attack Thursday in the city of Surat Thani, the Nation reports. The first explosion occurred outside the marine police station and the second half an hour later in front of a police station, Surat Thani’s police chief Apichart Boonsriroj said. The city is a busy transit point for tourists heading to the popular resort islands of Koh Samui and Koh Pha Ngan.

There are also reports of multiple explosions on Friday morning in Phuket, a popular holiday destination for foreign tourists. At least one person has been injured in an explosion on Patong Beach, Channel News Asia reports.

“The bombs were meant to scare tourists and people who work on Bangla Road,” says Joe Bonmeh, a Burmese national who works at a tattoo parlor in Patong, where the two explosions were detonated.

General Deputy Police Commissioner of Patong, Manit Tanamanit told TIME that they have a picture of the suspects “from CCTV” and that authorities have arranged a meeting “to talk to the owners of businesses soon.”

Earlier on Thursday a bombing took place in the southern province of Trang, killing one person and injuring six.

About 200 km north in the Phang Nga province, local media has also reported that a market popular with tourists in Takuapa has been gutted by fire.

The U.S. Embassy in Bangkok has urged its citizens in the country to “maintain a high level of vigilance” and should avoid the affected areas.

Junta leader Prayuth Chan-ocha has called for calm in the wake of the bombings. “The bombs are an attempt to create chaos and confusion,” he told reporters. “We should not make people panic more.”

The bombings coincide with the 84th birthday of Thailand’s Queen Sirikit and come almost exactly one year since a bomb ripped through Bangkok’s Erawan Shrine on Aug. 17, 2015, killing 17 and injured over 100.

With reporting from Andrew Scott in Phuket. 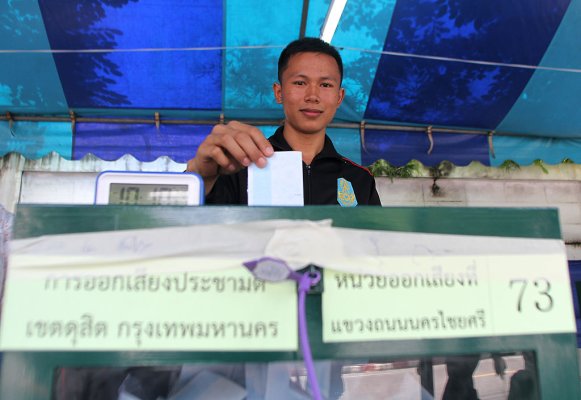 Here's What You Need to Know About Thailand's New Constitution
Next Up: Editor's Pick