A Brief History of Voyages Through the Northwest Passage

The Gjoa ship that Roald Amundsen used to sail through and open the Northwest Passage between the Atlantic and the Pacific, arriving in Nome (Alaska) August 30, 1906,
De Agostini Picture Library—Getty Images
By Olivia B. Waxman

On Tuesday, the luxury cruise ship Crystal Serenity begins a 32-day voyage carrying more than 1,000 passengers from Anchorage, Alaska, to New York City through the legendary Northwest Passage, which connects the Atlantic and Pacific Oceans through the Canadian Arctic Archipelago. The vessel has been called “the first large-scale cruise ship packed with tourists” to “conquer” the 900-mile sea route that has been notoriously difficult to traverse due to its icy landscape and dangerous weather conditions.

In fact, European explorers spent centuries trying to find the passage in the first place.

James P. Delgado, Director of the Maritime Heritage Program at The National Oceanic and Atmospheric Administration and author of The Quest for the Northwest Passage, says the centuries-long quests started during the mini ice age of the Elizabethan era, in the mid-to-late 15th century, when “the English, desiring to reach the riches of ‘The Orient,’ figured they could find an oceanic shortcut through the Americas and not have to deal with Spanish-controlled waters, particularly in the aftermath the Treaty of Tordesillas,” which divided land discovered by Christopher Columbus between Spain and Portugal.

The list of failed attempts is a long one: Delgado says Martin Frobisher’s 1578 journey was the first major attempt, though the explorer ended up being sidetracked by false gold. Henry Hudson would try in 1610, but end up in an area now known as Hudson Bay, which would later open up that part of the continent to the fur trade. Explorers in the 17th century would mostly “poke and prod” around the Eastern approach until the American revolution and the War of 1812 when Britain ships and minds were diverted from exploration for the purposes of war. After the war ended, explorer John Ross didn’t find the passage, but did find the North Magnetic Pole during his 1829-1833 expedition. Captain Sir John Franklin and two ships carrying at least 128 men set off in 1845, then disappeared.

That disappearance, however, would prove to be a turning point: it “inspired expeditions to find him, and those search expeditions show there’s a passage through,” Delgado says. (In fact, the search continued as recently as Sept. 2014, when Parks Canada discovered one of the two ships, the HMS Erebus.)

Robert McClure’s search expedition for Franklin would spot a passage via ice, but Norwegian explorer Roald Amundsen’s ship would be the first to go all the way through by water — East to West — between 1903 and 1906. The Canadian schooner St. Roch would be the first ship to go in both directions in the early 1940s.

By the Cold War, things had changed. The Arctic had become a “strategic frontier,” and the USS Seadragon made the first submerged passage in 1960, during a period when “Soviet and American submarines used it as a highway,” Delgado argues. The 1969 voyage of the Humble Oil-sponsored SS Manhattan tanker would show “new commercial possibilities” by sailing through with icebreakers, along with accommodations so luxurious, TIME said it proved the Northwest Passage “could be tamed in style.”

After the Cold War came an increase in ecological and cultural tourism, Delgado says, adding that “now with global warming, it is not same fearsome passage it was.” One milestone was the summer of 2007, when TIME reported, “for first time in recorded history, the Northwest Passage was ice-free all the way from the Pacific to the Atlantic.” Such conditions make trips like the Crystal Cruise possible and environmentalists worried about the long-term implications.

“Ice-free should bring a sense of horror to all because that means melting of so much ice that sea levels will be much higher,” says Delgado. “You need to be careful what you wish for.” 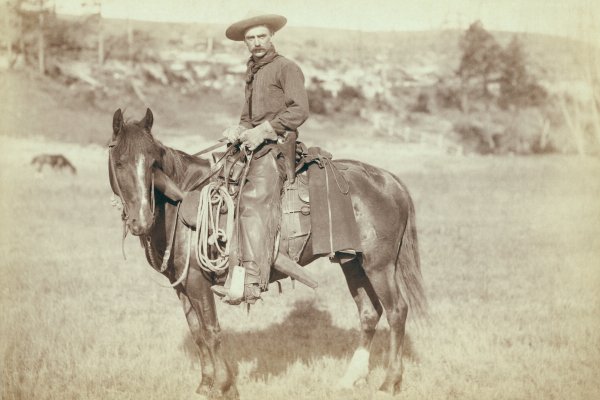 The Race of the Century that Marked the End of the Wild West
Next Up: Editor's Pick