The letter, first reported by POLITICO, says Trump has alienated “millions of voters” since the Republican National Convention with his repeated comments and gaffes that drew widespread criticism.

“Every dollar spent by the RNC on Donald Trump’s campaign is a dollar of donor money wasted on the losing effort of a candidate who has actively undermined the GOP at every turn,” the letter states. “The RNC should shift its strategy and its resources to convince voters not to give Hillary Clinton the “blank check” of a Democrat-controlled Congress to advance her big government agenda.”

The letter’s signatories include former New Hampshire Senator Gordon Humphrey, former GOP Congressmen Tom Coleman, Chris Shays, Mickey Edwards and Vin Weber. Shays has said he will vote for Clinton while Humphrey and Weber have said they would vote for her if the election was close. It also includes former heads of Communication, Grassroots Involvement, Digital and other departments at the RNC. A Wednesday report said several RNC staffers have left because they do not want to help elect Trump.

“This is the family trying to fix itself,” said Andrew Weinstein, a former press aide to Senator Bob Dole and House Speaker Newt Gingrich who works in communications consulting, who is circulating the letter. “This is an intervention by former RNC staffers and other GOP officials: ‘Please stop destroying yourselves and protect our Senate and House majorities.'”

Weinstein said he will send the letter to RNC Chairman Reince Priebus next week.

Draft Letter to the RNC by Will Drabold on Scribd 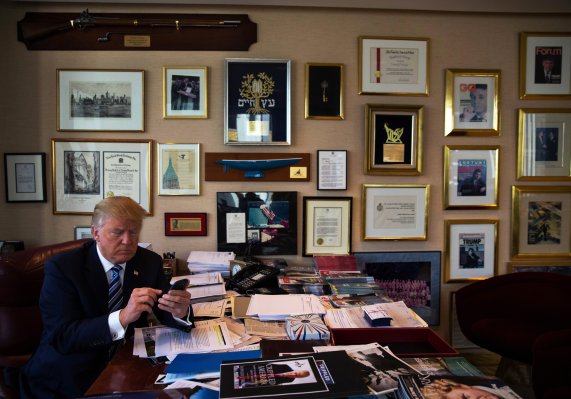 This Programmer Thinks He Can Tell Which Tweets Trump Wrote
Next Up: Editor's Pick